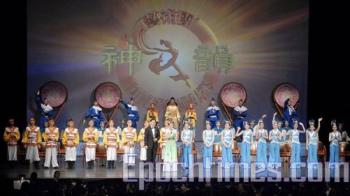 The Wonder of the Divine Performing Arts Reappears

By Du Ruo and Li Xin
Print
In the evening on August 10, the celebrated Divine Performing Arts (DPA) was invited to perform at the New Jersey State Theater, a pleasant surprise to the audience from New Jersey and New York.

This performance was held after the final of the second New Tang Dynasty Television (NTDTV)’s International Chinese Vocal Competition, all contestants were invited to the show. The contestants were deeply moved by the purity of benevolence and beauty.

This show was performed by the DPA on Tour, one of the three performing groups of the DPA. DPA on Tour and DPA New York performed more than 200 shows between December 2007 and May 2008 all over the world. The purity and beauty displayed by the art were echoed by 600,000 audience members and received widespread high praise.

Dorje Tsashi (a Tibetan) from England, the man’s Bronze Metal winner in the second NTDTV International Chinese Vocal Competition said, “The DPA is just too splendid! It is very professional, pure and truthful. The orchestra is wonderful. The combined western and Chinese music is especially pleasing to the ears. The folk music with western flavor feels very gentle.”

“When Comparing this with shows performed by folk music groups and folk dance groups that I have watched in China, the DPA’s performance gives me a different feeling. It gives one a feeling of an abundant righteous atmosphere, which is awe-inspiring integrity.”

Yi Jida, the bronze metal winner in folk musicfrom who is from Taiwan said, “The DPA is so wonderful! It is very moving. Their movements are very complicated but harmonious—it is simply superb. Every program is very attractive.”

“The most touching program is 'The Risen Lotus Flower.' It touches me the most because of the vitality exhibited. This is a first-class performance and is very noble. The singers are wonderful and I have learned a lot from them and from their techniques. I feel so happy.”

Jason Fuh, the winner of the men’s group, said, “This is the first time I have watched a DPA performance. The stage design is well-done and every program is very moving. I have not experienced the events depicted towards Falun Gong personally but I saw recreations of the torture that they encountered in “The Power of Awareness” program. I was so moved that I cried. The DPA concluded in the end with purity and sincerity. Everything we do must be sincere.”

Rose & Thomas Alloway have watched four DPA shows in Beacon Theater, Radio City, and Atlantic City, and they again came with a neighbor to the New Jersey State Theater. After watching their fifth DPA show, they are still full of praises. They said that the more they watch, the more they enjoy it. Both said they like the dances, costumes, and the stories because it enhances people’s spirit. They left their telephone number at the ticket booth and asked to be notified for the next show.

There will be another DPA performance on August 24 in Manhattan after the NTDTV’s Global Chinese Dance Competition is concluded.

The DPA on Tour is going to broaden its scale in 2009 in its number of performing art groups, the number of audiences, and the time span. As the DPA is becoming widely known, the audiences are expecting more powerful performance next year.