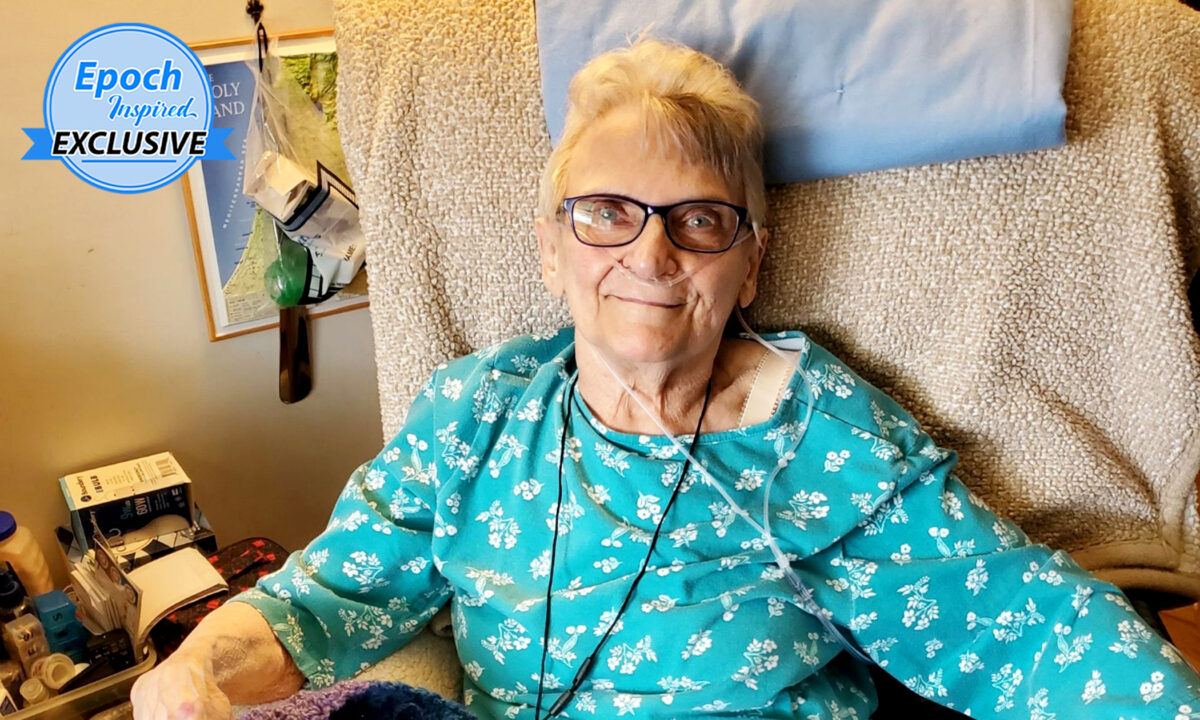 Woman Who Overcame Her Addiction Is on a Mission to Help Others: ‘God’s Arms are Long Enough to Reach Them’

A 79-year-old woman who’s had a history of addiction shares how realizing God’s love for her changed the course of her life and has driven her to serve others. Now on oxygen, she is spending her days crocheting various items for the homeless and for women in prison.

Going to The Forgotten

Sitting in her recliner and crocheting, a beautiful scarf now drapes across Lucena Heivly’s lap. The elderly woman, who has been suffering for years from chronic obstructive pulmonary disease (COPD)—a chronic inflammatory lung disease that causes obstructed airflow from the lungs—says the illness came from years of smoking when she was young.

However, despite going through some really hard times, including enduring some health problems, Heivly, whose deep laughter is contagious, shared with The Epoch Times that her sense of humor is a “gift” that has helped her.

The colorful scarves that fill the basket beneath her are a labor of love, created to help the homeless stay warm through Pennsylvania winters. She packages each scarf in a plastic bag along with a message for the recipient that says that they are cared for by God and that there is hope.

Prior to her breathing getting worse, Heivly used to visit local farm fairs to talk to people and encourage them. She had also visited those in the women’s prisons to personally share her story. She would provide them with support, telling them that they weren’t alone and that they are known and loved by God.

But now, being homebound due to COPD and Covid, she still wants them to understand they aren’t forgotten, and that no matter how much wrong they’ve done in their life, God’s forgiveness and grace are sufficient for them.

These women, along with many others that Heivly has felt called to serve, often have struggled with trauma, shame, guilt, and feelings of unworthiness. Many have gotten into trouble and now struggle to feel they are valued in any capacity. Heivly feels her calling is to tell them otherwise. “Jesus loves them. Because He loves them, I love them,” she said.

‘It Could Have Been Me’

For Heivly, this calling is personal. As a survivor of childhood trauma, she found herself entering into a lot of unhealthy relationships in her adult life, seeking to be approved of and desperate to feel close to anyone. She began drinking alcohol at the age of 16. Relating to the women she met when visiting the prison, she said she knew what it was like to feel dejected and to be an outcast, heading down a path that was very destructive.

“It could have been me, but by the grace of God it wasn’t,” she said.

In her late 20s, Heivly entered a recovery program for 28 days. After she left, they had a meeting to discuss where she was going to head. During that meeting, they thought she’d be the first person to pick up a glass, and she admits that it was a really big “struggle.” However, that’s when she realized she was not in control, but God was.

Heivly recalls having a sponsor who gave her “tough love,” and wanted her to take responsibility for what she had done.  The septuagenarian said, “She told me what I needed to hear, not what I wanted to hear.”

Her impact, according to Heivly, had a profound effect on her life. In 1978, Heivly had her last drink and has since been sober. Heivly later began learning about a personal relationship with God, but feared that she could never be forgiven for things she’d been involved in.

Reflecting back, she said she just wanted to feel she mattered. However, with her past mistakes, she felt that she was “beyond redemption.” She couldn’t fathom that God would see anything of value within her. At one point, Heivly was looking for someone to help, and a lady in a church told her that she was an “abomination in the sight of God.”

At her rock bottom, she thought she was beyond any grace, and that her actions had made her unworthy of being loved. Even the church, she thought, had rejected her.

Finding Light in the Darkness

Broken from her past, Heivly was at her end and wanted to give up on life. She made a decision to go see a counselor, figuring this was her last effort. That counselor did something extraordinary and unusual; she told Heivly to stand up on her chair, and when she did, the counselor put her hands on her shoulders, and said: “I ask your forgiveness for what the church has done to you, and I ask your apology, as a sister in Christ, on their behalf.”

The counselor also told Heivly that nothing could keep her from the love of God. At that moment, Heivly said, she broke down in tears. She never thought someone would say those words to her. It was at this pivotal point her life began to change.

Through counseling and other treatment for depression, she began to experience healing from her past, and she realized God’s love and purpose in her life. She began to make better decisions as a result and wanted to honor God in all things.

“When I was younger, my mother told me that I would not amount to anything good,” Heivly said. “Now I know that isn’t true. God has done a lot of good with me. He has redeemed me.”

Viewing Trials Through the Lens of Hope and Gratitude

When asked how she began to view life and the trials that have come her way since being in recovery, quitting smoking in 1993, and facing COPD and asthma, which has left her home-bound, Heivly said: “I have COPD because I smoked for years … so I’m paying the price. There are consequences for what we’ve done wrong, but it doesn’t mean God doesn’t forgive us. His grace is sufficient.”

Grateful to God, she said: “Every day I wake up and say, ‘Good morning, God.’ I thank Him for every day that I have. Some days are worse than others, and then I thank Him for oxygen. I think of the awesomeness of God…down to the little creatures He has made along with everything around us. You can’t open your eyes and not see Him in all things around you. When I see these beautiful things, I tell God, ‘Your sunset is so beautiful. The portraits you paint are just amazing. How You provide!’”

Heivly said that, through all the trials and tribulations of life, she overcomes them with the hope of the Lord.

“We are just travelers in this life,” she said. “We belong with God. We travel along until we reach heaven.

Being a witness of His salvation, Heivly said she needs to share God’s love with others and to tell them that there is no brokenness beyond His repair.

She has spent many years going to those who have no visitors, and to people who feel they’ve been forgotten, to tell them they aren’t alone and God is with them no matter where they are in life.

“I tell them God’s arms are long enough to reach them, no matter how far they think they’ve fallen,” she said.

For those who are contemplating suicide as she once had, feeling they have nothing left to live for, Heivly offers a piece of advice.

“I want people to know that no matter how bad their childhood was, no matter what’s happening to them now, and no matter what they’ve done, there is hope because God loves them,” she said.

Geeta Nangia
Follow
Geeta Nangia is a physician, Board Certified in Child and Adolescent Psychiatry, practicing at Parkside Pediatrics in Greenville, South Carolina. She is also the CEO of Known and Loved, an organization seeking to address unmet mental health needs in her local community.
SHARE
Friends Read FreeCopyFacebookTweet
You May Also Like