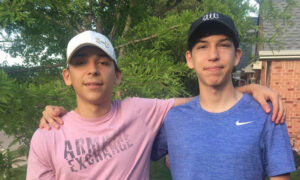 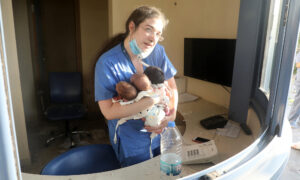 ‘She Possessed a Hidden Force’: Nurse Pulls 3 Newborns Out of a Hospital Hit by Beirut Blast
0 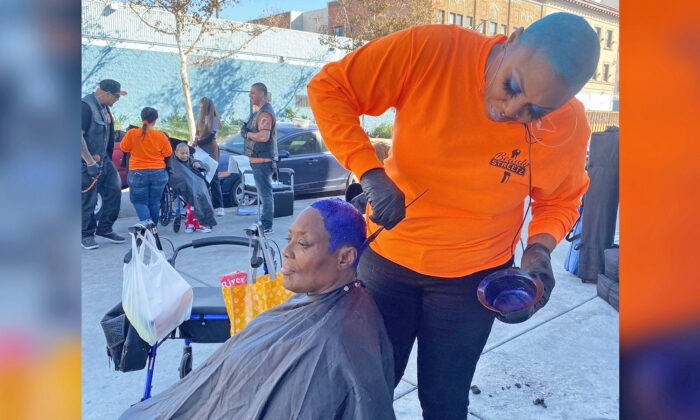 For a few hours every Saturday morning, Los Angeles’s Skid Row—home to one of the nation’s largest concentrations of homeless people—transforms into an outdoor beauty salon.

There, where tents line entire city blocks, homeless people gather to get free makeovers from Shirley Raines, or a member on her team of volunteers made up of licensed hairstylists, barbers, and makeup artists.

The service began three years ago when Raines started her nonprofit Beauty 2 The Streetz, an organization dedicated to making those who are homeless look good and feel even better.

She said she came up with the idea after volunteering at a soup kitchen, where she realized that while food, water, and shelter may be what homeless people need to survive, a haircut, new hair color, and some makeup are what help them thrive.

The CCP virus pandemic has put the organization’s beauty services on pause—but the nonprofit is still helping in any way it can. It has since shifted its focus to providing resources to help protect homeless people from the coronavirus.

And now that California Gov. Gavin Newsom has allowed hair salons and barbershops to perform services outside, Raines said she hopes to restart haircuts and makeovers soon.

A Purpose That Stemmed From Her Pain

For many on Skid Row, Raines has become much more than a stylist. With each interaction, she said people in the homeless community share their life stories with her.
Caring for people experiencing homelessness has also helped Raines heal a traumatic pain of her own. About 30 years ago, she lost her 3-year-old son in an accident.

“That just broke me,” she said. “I came down with panic and anxiety disorder… I wasn’t a good mom to my living children. I was just a really bitter person and my loss made me that way.”

With her twin sister’s advice to “find a purpose for the pain,” and a friend’s recommendation to volunteer at a soup kitchen, Raines set foot for the first time in LA’s homeless community, helping give out food.

“I saw so much brokenness, so much heartbreak,” she recalled. “I just recognized that because I felt like I was one of them. I’m broken too from the pain and so I really liked it and I continued to go out.”

As she gave out food, she quickly realized that homeless women were more interested in her hair, makeup, and fashion.

She asked them if they wanted some hair and makeup products and they said yes, so she headed to a makeup store and bought dozens of mascaras, eyelashes, and other simple makeup items.

Then she went home to pick up bottles of hair color that she hadn’t used and headed to Skid Row. As she handed out makeup products and dyed people’s hair, she realized that she had found her purpose and decided to launch her own operation.

Initially, Beauty 2 The Streetz was small—with just her five children helping to hand out food, drinks, hygiene kits, and beauty products. Raines alone would dye people’s hair and do their makeup.

However, when she started live-streaming the events and posting pictures to Instagram, Beauty 2 The Streetz soon became more well known.

Licensed hairstylists, barbers, makeup artists, and even big makeup companies reached out to Raines saying that they wanted to help.

By 2019, Raines had registered Beauty 2 The Streetz as an official nonprofit with about two-dozen volunteers generously offering their time and efforts to help Skid Row’s residents feel beautiful.

Boosting the Confidence of Her Clients

Cherish Benham, 30, and her husband were homeless on and off for around four years, an experience she described as “traumatic.”

“I saw a man get shot and drop dead just 15 feet away from our tent,” Benham told CNN. “To see that, it gave me fuel to get me out of that situation.”

Benham already had a reason to get her life back on track—but she just needed the confidence and the right opportunity.

“I felt like a brand new woman,” Benham said. “It gave me the confidence to lift my head up higher. To not worry about the situation I’m presently in, but move forward for what I can be in the future.”

In the year that they’ve known each other, Benham said Raines was always there to provide her with anything she needed, whether it was some money for a work uniform, job connections, or just someone to talk to.

Now, Benham is working for the Census Bureau and has been living in permanent housing with her husband for three months. In addition to her own hard work, she credits Raines for turning her life around.

“Ms. Shirley is one of the most caring, loving souls ever,” Benham said. “No matter what situation you’re in, no matter what you look like, she’s [sic] always treats you with the utmost respect. Especially in Skid Row, you don’t get that much welcoming respect, but with her and her team, they make me feel like a normal human being.”

Pushing Through the Pandemic

When California ordered all its residents to stay at home in late March owing to the CCP (Chinese Communist Party) virus, commonly known as the novel coronavirus, pandemic, Raines and her volunteers complied and did not go to Skid Row. However, their presence was greatly missed.

“That Monday, I opened up my DM on my Instagram and several homeless community members sent me messages saying, ‘Where are you? We’re hungry. We’re alone. Nobody’s out here feeding us,’” Raines recalled.

“I realized that we didn’t have the luxury of self isolating because we built this relationship with the community so we need to still go out there and help them,” she added.

Because homeless people live in close quarters and have limited access to handwashing resources, Raines knows that they are extremely vulnerable to contracting Covid-19. So instead of hair and makeup, she shifted her operations to focus on food, hygiene, and protection.

The nonprofit has been handing out supplies every weekend since March 28, making sure they’re adhering to social distancing guidelines and wearing masks themselves while on Skid Row.

Raines and her volunteers distribute hundreds of McDonald’s burgers, as well as kits packed with hand sanitizer, bottled water, socks, masks, and vitamin C-rich fruits to boost the immune system.

Still, the desire for hair products and makeup is there, Raines said, so Beauty 2 The Streetz has also been slowly bringing out wigs, makeup, combs, and brushes so homeless people can style themselves.

Raines said if there’s anything to learn from the CCP virus pandemic, it’s that “any one of us could be them (homeless) at any given time.”

An analysis published in May by Brendan O’ Flaherty, a Columbia University economics professor, predicted that homelessness will increase 40–45 percent by the end of the year if the CCP virus pandemic continues to drive unemployment levels as high as predicted.

That would mean 250,000 more Americans would become homeless compared to last year, bringing the total number of those experiencing homelessness to above 800,000.

“We’re already looking at places where landlords are putting tenants out and we’ve got moms and children sleeping in the car. They just had a job. Everything was fine with them,” Raines said.

“One pandemic came in and changed everyone’s finances. I want people to understand that they are no different than us and the narrative of what homelessness is has to change,” she further added.