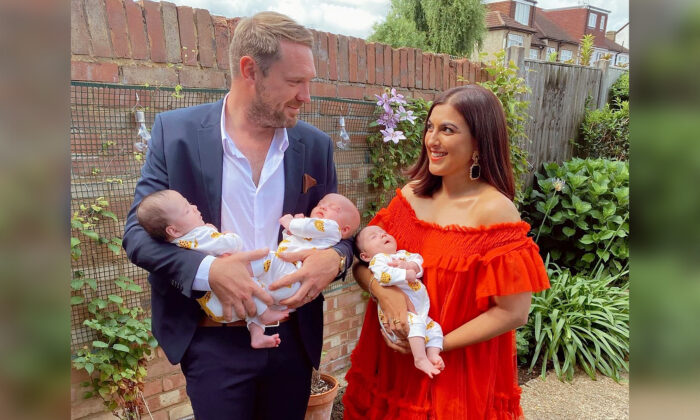 'It is like we were given back all of our babies.'
By Caters News Agency

After two miscarriages, a UK woman has become a proud mother of naturally conceived “miracle” triplets.

Following the loss of two babies at 11 weeks, Natasha O’Grady, from Isleworth, London, learned the good news at the end of a grieving therapy program. Natasha, 32, and her husband, Ryan, 34, were in “total shock” when a scan at 14 weeks revealed three healthy heartbeats.

The couple are now proud parents to 4-month-old daughters Onyx, Maddox, and Quinn.

Natasha said: “The whole world wants to portray pregnancy as this seemingly, perfectly smooth ride. It’s not until you’ve been through it that you realize this simply isn’t the case for a large proportion of society.

“Nothing could prepare us for our journey to parenthood. I never thought a miscarriage would happen to me and that’s simply because it’s a topic that isn’t openly talked about enough which drastically needs to change.

“It was extremely traumatic both mentally and physically, and I began to believe I may never become a mum.

Recalling the time when she became pregnant for the third time, she said that there was “no celebration hugs or jumping up and down in the bathroom.”

“The sheer wave of panic just engulfed us again and that is the sad reality of pregnancy after loss, you truly believe it’s going to be taken away from you at any moment,” she said.

“I didn’t feel I could get excited or look to the future until our scan revealed there were three healthy babies!”

Natasha’s journey to motherhood began in January 2019. The couple were elated but as the weeks passed, she began to bleed and an early scan confirmed there wasn’t a heartbeat.

The couple were heartbroken, and Natasha recalls going into a “black hole.”

“I can honestly say that never in my wildest dreams did I expect to be in that position,” she said. “It was never something that had even crossed my mind, and immediately, I was now entering a supposedly ‘secret’ club that I would never wish to be part of.

“I didn’t really know how to deal with and process the situation or felt I had anywhere to turn, so instead tried to carry on as if nothing had happened.

“I found myself desperately seeking something to fuel my focus on.”

The couple decided to bring their wedding forward to August 2019. However, Natasha says it was “the worst decision” they could have made.

“I absolutely threw my heart and soul into trying to plan an entire wedding myself in less than three months, whilst also battling with the aftermath of our loss,” she recalled.

“I was fixed on this idea of perfection, and how everything had to be absolutely spot-on as I felt I desperately needed to give something back to our family and friends after feeling I had taken away the joy of us having a baby.

“I really did feel like I was to blame and the wedding was my deluded way to make it all better.

“In March 2020, I found out I was expecting again. Weeks later, I felt cramps again but as I hadn’t experienced any bleeding, I tried my hardest to keep a positive focus.

“Sadly, I was wrong. I collapsed at home and I wasn’t breathing properly. My body went into total shock as my body rejected the pregnancy.

“As I was taken out on a stretcher by the paramedics, my body was trembling and I passed out. I was taken into theater as I began to profusely bleed and they needed to operate immediately.”

Following this loss, Natasha found a charity called Crossway based in Twickenham, London. They offered her around-the-clock support and a weekly therapy session to deal with depression.

Natasha was leading a healthier life and cut alcohol plus caffeine out of her life while focusing heavily on improving her mental health.

She said that nearly a year after, she found she was pregnant again. However, she said she instantly “felt scared that history is going to repeat itself.”

“The feeling of guilt for finding yourself feeling bursts of excitement, then having to calm yourself down because the reality is, this baby might just not stay too,” she added. “At 13 weeks, my heart broke into a million pieces when I found blood again. Seeing that sight was just like the trap door opened again below me, and the black hole was getting ready to pull me down again.”

But at the 14-week scan, the sonographer showed three healthy heartbeats—the moment that the couple describes as “surreal.” The triplets were conceived naturally and born at 33 weeks.

“We were in complete disbelief!” she recalled. “We had mentally tried to prepare to hear those heart-breaking words again, so to hear we were actually already passed the first trimester and carrying three healthy babies was the craziest moment of our lives.

“We have no history of triplets in our family so we feel completely blessed. It is like we were given back all of our babies.”

Natasha says that going from no children to a parent of three overnight has been a “total whirlwind,” but the couple work together as a team to give their baby daughters the “happiest lives” they can.

“We truly believe we’ve been blessed with this incredible gift as it’s so rare to have triplets and couldn’t be more grateful every day that our girls were born into the world healthy and safe after such an incredibly scary pregnancy,” she said.

“Some days are hard as we try to adjust, but seeing three smiling faces staring back at you makes it all worth it.”