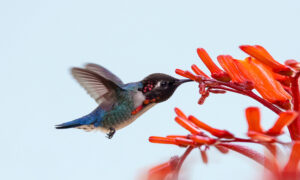 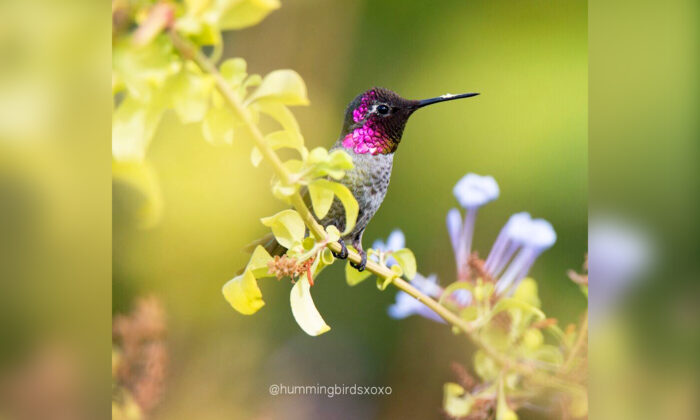 Woman From California Captures Breathtaking Photos of Hummingbirds From Her Backyard

A Minnesota-born, California-based woman has grown popular for snapping breathtaking images of hummingbirds. The Instagrammer captures stunning details of these tiny jewels all from her backyard.

“Everybody says that they love hummingbirds,” Tracy Johnson told The Epoch Times. “But my love for the hummingbirds goes far beyond the outside beauty and the experiences that I’ve had with them.”

Johnson, who currently lives in Livermore, worked as an executive during the day and a singer and songwriter during the night until six years ago. However, after being diagnosed with two autoimmune muscle diseases—scleroderma and an inflammatory myopathy—she became unable to work, play the guitar, or write songs.

Due to her condition, Johnson had to move in with her father and stepmother.

“I found myself severely depressed,” Johnson said. “I went from having two beautiful careers that I loved to suddenly have nothing at all. No purpose. No feeling of self-worth.”

However, it was during this time when, one day, as she was basking in the sunshine in her parents’ backyard, a hummingbird flew up to her and hovered around her face.

“It was close enough to me that I could see a sparkle in his eye, and the flash of color on his neck, and yellow pollen on his head,” Johnson said.

Johnson, who tried to communicate with the hummingbird, said: “You’re a mess! Look at you: you have pollen on your head.” However, the tiny bird just looked back at her with clear eyes. That’s when it hit Johnson hard that maybe the hummingbird’s day wasn’t going the way he wanted it to but at least he had a purpose; which was to hop from one flower to another for some nectar.

Mirroring this instance to her life, Johnson realized that she needed a purpose too.

“A new purpose that my terrible muscles would allow me to do,” Johnson said. “So I set my camera up on a tripod and I waited. And I took probably 500 photos of hummingbirds flying to the feeder and of those 500 photos, maybe one was usable and in focus.”

However, at that moment, the blurry images didn’t really matter to Johnson as she had found a “new purpose.”

Over time, Johnson got better at capturing more focused photos. After she showed her collection to a friend, a photographer at National Geographic, she was encouraged to start a dedicated Instagram page for hummingbirds.

Soon, her followers grew to 75,000 and she began being interviewed by several media outlets.

“Hummingbirds literally saved my sanity,” Johnson said. “They gave me hope when I felt that all hope was lost. They gave me a new purpose. I’m truly thankful.”

Equipped with a Nikon D610 camera body and a 150 to 600 mm Tamron lens, Johnson says it requires a lot of patience to capture these little birds, as they are really fast.

“Taking pictures of the hummingbirds is very challenging for many reasons,” Johnson said. “It can be a huge challenge: because you might get the shot completely set up and the bird might look really sparkly and pretty and then a cloud goes past the sun and you have to start all over again.”

With the opportunity to observe them so closely, Johnson says, “there is such a beautiful amount of intelligence in these tiny creatures. It’s pretty unbelievable to me.”

“These creatures have personalities as individual as you and I. And outfits that have slight variances, so that if you pay close attention, you can tell them apart,” she added.

Apart from their stunning beauty, Johnson says these little birds’ personalities “are as different as snowflakes.”

“Watching them interact is fascinating and, quite often, hilarious,” Johnson said.

Apart from spending time in her backyard photographing these tiny birds, Johnson has also become friendly to a family of cottontail rabbits.

“I feel so blessed to have this connection to the animals and birds. And every day brings me new joy interacting with these creatures,” she said.

As for the overwhelming reaction that her page has received, Johnson said that she is “pleasantly surprised” as her followers appreciate these petite birds just the way she does.

“Many people have told me that my Instagram page is their favorite page on Instagram and that it’s a peaceful place for them,” Johnson said. “In a time when the world seems to have gone completely crazy: they can come and escape into my calm and soothing world of hummingbirds.”