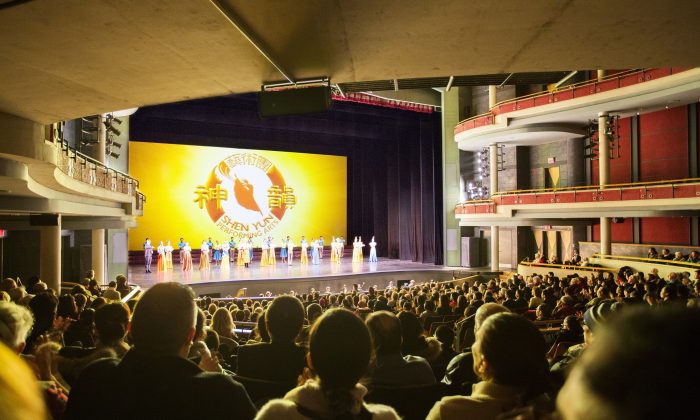 Shen Yun, the world renowned classical Chinese dance and music company, has been touring the world since its establishment in 2006 in New York. According to the company’s website, the company’s mission is to “revive the lost world of traditional Chinese culture and share it with everyone.”

At first, Carol bought the three most expensive tickets to come with her daughter, Natasha Wier, and Sharon. “We’re the three musketeers—we always did everything together,” said Sharon.

However, Carol’s condition rapidly deteriorated. “We got through Christmas, we got through New Year’s,” said Sharon. But they didn’t know how they were going to get her to Shen Yun at the Living Arts Centre on Jan. 13.

“I said, ‘I’m going to get her there if I have to carry her,’” said Sharon. She finally found Total Care Transport Service, a company willing to help get Carol to her seat.

Shen Yun was a magical experience for the family, and Natasha and Sharon were especially grateful to share the experience with Carol. She had not been alert lately, but as the curtains opened, her demeanor changed.

“She loved it. When she first saw it [the opening], a tear came to her eye,” said Natasha.

“She kept saying ‘Wow’ throughout it,” said Sharon.

“It’s a miracle,” she added, grateful she’d been able to make her sister’s wish come true.

The Power of Hope

After the show, Shen Yun conductor Jong-Hun Bae and some of the artists were invited to join the family and the Total Care workers for a post-performance photo.

Natasha expressed her happiness at seeing the performance, and was grateful her mother’s dream had finally came true.

“A beautiful dream,” said Carol. “It was fabulous–just bliss.”

“Well, there is one thing to do and that is hope. Hopefully we’ll have that,” said Carol.

Natasha noted her mother had always valued Chinese culture and spirituality and had wanted to travel to China to see the country for herself. “Today she visited China and saw the real, beautiful aspect of China–culture, value, religion and dance. That’s what she enjoyed today.”

“It was wonderful to watch. The colors were fabulous. Just perfect. I’d like to come again,” said Carol.

One of the beliefs found in traditional Chinese culture and religions, as well as in many other cultures and religions around the world, is that good people will be rewarded and eventually return to heaven one day.

This message of goodness rewarded is at the core of Shen Yun’s performances.

Natasha also wished to send a message to the artists. “Keep doing what they’re doing because it brings happiness to everybody watching,” she said.