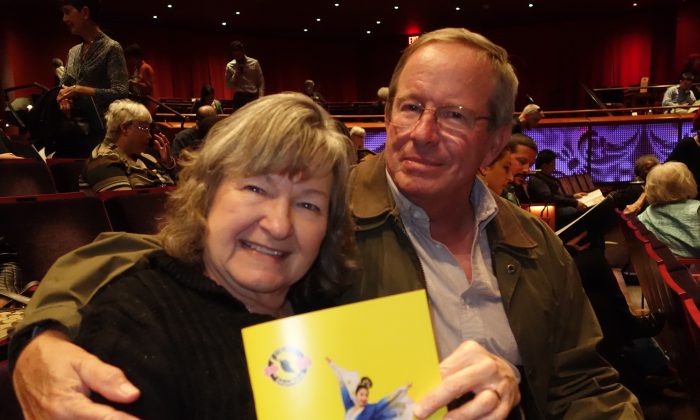 Witnessing the Most Ancient Culture in the World

SAN ANTONIO, Texas—The China one witnesses in Shen Yun Performing Arts is not so much the China today as it is the China of legends, of stories from a mythical time, and an era past.

Through classical Chinese dance and music, it all seems so real to theatergoers. The Manchurian princesses of the Qing Dynasty balance on elevated “flower pot” shoes just a few feet away on stage, heavenly fairies descend from the moon and spring to life, and Buddhist monks demonstrate supernatural powers along with very realistic portrayals of levity, shock, frustration, and fear. It is, as Shen Yun explains on its website, a divinely inspired culture.

“I love it. I love the—looking into the depth of a society, of a culture that I have never really known existed in this dimension before,” said Eddie Cox, who attended a performance on March 19 with his wife Catherine at the Tobin Center for the Performing Arts.

It was eye-opening and uplifting, the couple shared, and so sad to think that this traditional culture was being denied to the people of China today.

As the emcees had explained, Shen Yun travels the world every season to about 100 cities—to everywhere but China. Under communist rule, the authentic traditional Chinese culture is oppressed. The regime is officially atheist, while the traditional culture stood on a bedrock of spirituality, governed by beliefs that stemmed from the religions of Buddhism, Taoism, and Confucianism.

Shen Yun seeks to revive this culture authentically, the emcees explained, and share it with the world through the arts.

“Their spirits seem to be soaring with joy and the sharing of their gifts,” Mrs. Cox said of the performers. “It is breathtaking and so graceful, and emotional, very beautiful.”

The talent was evident from the very opening, where Shen Yun presented the creation myth of China and, through the use of a digital backdrop, brought in deities from the heavens onto the stage.

“I mean, it is almost hard to believe that they are not actually flying through the sky,” she said. “It looks so seamless and beautiful.”

And those scenes of heaven reinforced for Mrs. Cox the spiritual aspect of the culture, which she described as a “lovely and just simple …. getting along and sharing, trying to reach out to each other” kind of culture.

“It brings it more clearly in focus that we are all alike,” she said. “We all strive for something, some being higher than ourselves.”

It is probably the most ancient culture on this earth, Mr. Cox said, and it was beautiful.