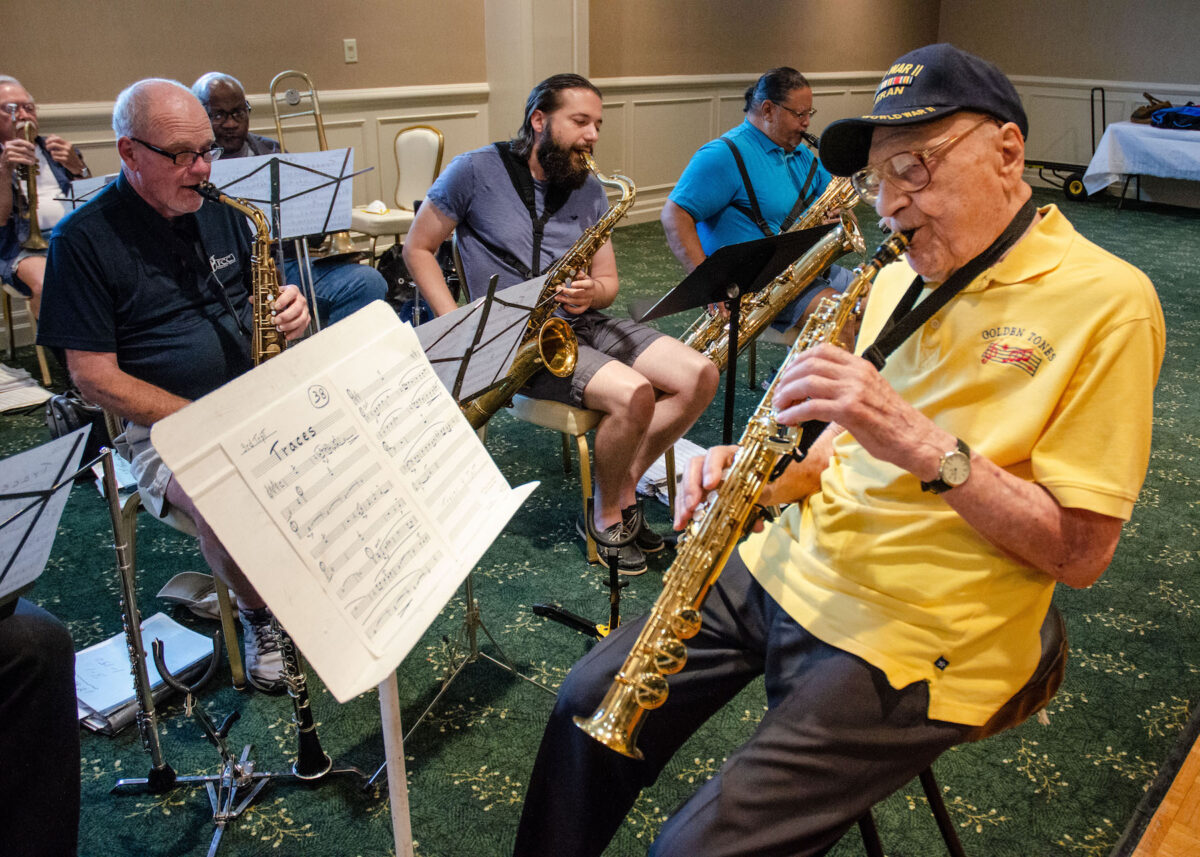 Witness to Our Time: At 101, This World War II Veteran Has Seen It All

On his date of birth, April 8, 1921, Warren G. Harding was the newly inaugurated president. Since then, Critelli has seen 18 commanders in chief occupy the White House.

Critelli has seen a great deal.

Critelli was the first child born to a carpenter and a stay-at-home mom in Tiriolo, a small town in the Calabria region of Italy.

After his first sister was born, his father, who served in the Italian Army during World War I, was able to move the whole family to the United States, when Critelli was 8 years old.

Just as in the movies, the family arrived by ship and slept on the deck. They settled in the Richmond Hill section of Queens, New York, where they rented a house.

Critelli’s arrival in the United States in 1929 coincided with the start of the Great Depression, as well as with Prohibition. During that period, four more siblings were born to his family, bringing the grand total of children to six.

“It was tough for him,” Critelli told The Epoch Times, referring to his father. “It was tough.”

The family received canned goods from the Catholic church in the neighborhood, although at the time, a lot of families didn’t want to accept charity.

“But we did,” Critelli said.

According to film historians, the silent film era came to an end with 1927’s “The Jazz Singer,” the first movie to have synchronized sound. However, the transition didn’t happen overnight, and Critelli caught the waning days of silent movies.

“Charlie Chaplin. I remember him. He was magnificent,” he said.

The Great Depression also kicked off the golden age of Hollywood. Movie palaces dotted the streets of New York City, and Critelli would see two feature films, plus a short comedy, all for the admission price of 10 cents. (You read that correctly.)

Serials were popular at the time, where Our Hero would find himself in a predicament—such as dangling off a cliff—and the movie would abruptly end, forcing viewers to return next week to see what happened (hence the term “cliff-hanger”).

“He’d survive somehow, and then get into another situation,” Critelli said.

Also during the Depression was the golden age of radio. Critelli listened to all the kids’ programs, such as “The Shadow,” “The Lone Ranger,” and “Little Orphan Annie.”

In Critelli’s 2nd- or 3rd-grade class was a boy named Jack Cohen.

“I wasn’t crazy about the guy,” Critelli said of Cohen. “He was a pain in the neck.”

He recalled Cohen chasing a girl, pulling her pigtails, and playing tricks on her. Critelli didn’t want to be seen with Cohen by his other friends.

Cohen grew up to be Rodney Dangerfield.

During Critelli’s childhood, the refrigerator hadn’t been invented yet. Kitchens had an “icebox,” which was exactly what it sounds like—a box with a block of ice.

The ice would generate cold to keep food from spoiling, and, as it melted, a pan underneath would catch the water. The water needed to be dumped and the ice replaced a few times per week.

Even though this was New York City and not some rural area, Critelli remembers the “iceman” delivering blocks of ice from a horse-drawn cart.

So he and a pal would go to the Borden Dairy Co. a few blocks away where the milkmen would load up their horse-drawn carriages, then swipe some of the ice that fell to the floor, and bring it home to his mother in their carts.

Eventually, Critelli’s father was able to buy the house they rented for the purchase price of $3,000. (Houses in the area are currently on the market for more than $600,000.)

During high school, Critelli took up the saxophone and clarinet, and by 18 was playing with a five-piece band that had a weekly gig at a restaurant. His compensation was $3 and a chicken dinner.

On Dec. 7, 1941, the Japanese bombed Pearl Harbor and thrust the United States into World War II. The following day, Critelli heard Roosevelt’s famous “Day of Infamy” speech on the radio.

Critelli was then 20 years old and of draft-eligible age. He was inducted into the Army on Oct. 28, 1942, and was trained as an airplane and engine mechanic. He also sewed parachutes.

After some time in England, Critelli arrived in France eight days after the D-Day invasion at Normandy, on the same beach, where he saw the aftermath of the battle.

By December 1944, Critelli was in Germany.

The Battle of the Bulge was the last major German offensive campaign on the Western Front during the war. It was carried out from Dec. 16, 1944, to Jan. 25, 1945, during a brutal winter.

An order came from above that Critelli and his unit were to airdrop supplies to the surrounded Allied soldiers, flying from a makeshift airstrip they had established nearby.

They loaded up C-rations, K-rations (both food), and ammunition into the planes, to be tossed out of the windows. Sometimes, Critelli would include a carton of cigarettes.

“Our planes could fly low,” he said, making them less likely to be shot down.

They made more than 100 drops, 14 of which included Critelli in the back seat. For this, he received an Air Medal, which is awarded for single acts of heroism or meritorious achievement while participating in aerial flight.

While in Germany, Critelli actually befriended a German family. He met a girl and could speak enough German to talk to her. She had a sister, and they invited him over to their house.

He made a couple of trips there over a few weeks, often bringing jars of orange marmalade he acquired from the supply sergeant.

Their father (or possibly uncle—his memory is a bit fuzzy) gifted a Garmisch pipe to Critelli.

“They treated me terrific,” he said, but swears there was no romance.

Critelli was in Germany on V-E Day, when the Nazis surrendered. That was May 8, 1945. But there was still the matter of the Japanese.

“We were ready to go to Japan. We were all assembled,” he said. “All of a sudden, it comes over the radio that they bombed [Japan],” effectively ending the war.

“Everybody started jumping up and down.”

The two decades following World War II brought many changes to life in the United States—refrigerators, for one. No longer did Critelli need to fetch ice for the icebox.

The 1950s brought the mass-marketing of television sets, which, in turn, created the golden age of television. Critelli bought his first TV shortly after the war.

He watched all the great comics of the era—Sid Caesar, Milton Berle, and Jackie Gleason—along with his entire extended family gathered around a 10-inch screen.

The decade also brought the birth of rock ‘n’ roll, only some of which Critelli liked. Elvis Presley left him unimpressed.

Critelli watched the Beatles’ U.S. debut on “The Ed Sullivan Show” in February 1964 and was left as unimpressed with them as he was with Elvis.

For Critelli, of all the advances made in the 20th century, it’s the moon landing on July 20, 1969, that was the most spectacular.

“That was something that I never thought would happen,” he said. “I didn’t think it was real until a couple of days later.”

Unlike “Flash Gordon,” space travel was no longer science fiction.

Critelli has embraced modern technology. He has a computer and cellphone, and he currently plays sax with his own jazz band, and they’ve recorded a CD.

“The internet was unbelievable,” he said. “That’s some progress.”

Two years ago, Critelli had a fall and broke his right femur, which was followed by a massive infection in his knee.

He now has a plate and rod in his leg above his knee, and he credits antibiotics—which barely existed for the first half of his life—for saving his leg.

While he sometimes walks with a cane, he can still make it up and down a flight of stairs pretty quickly.

Believe it or not, Critelli didn’t embrace reaching the milestone of 100 years old. Even when he was 90 years old, he’d tell people he was 75 or 80, he said.

“You’re 100 years old and you’re thinking of what you had and what you can’t get anymore.”

At 101, Critelli is the picture of health.