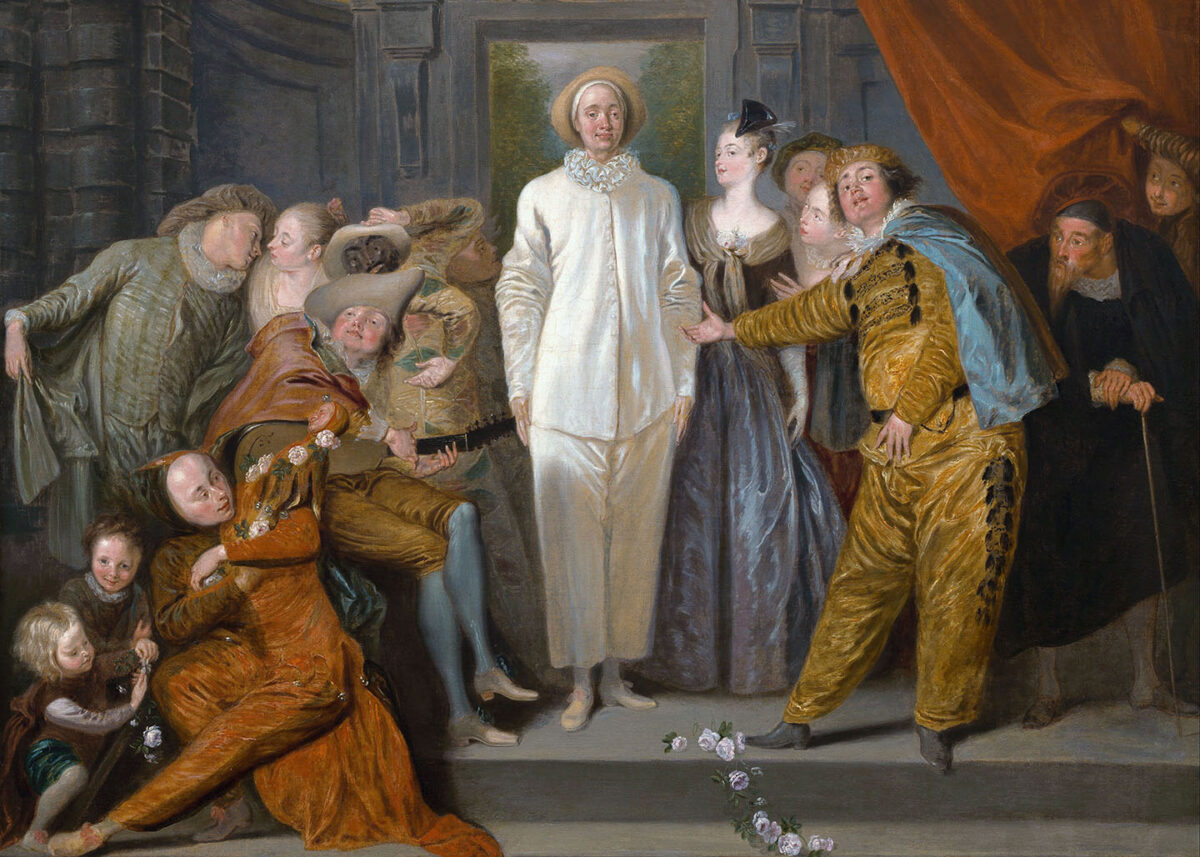 Enter the wit! A detail from "The Italian Comedians," circa 1720, by Jean-Antoine Watteau. Oil on canvas. National Gallery of Art, Washington, D.C. (Public Domain)
Books

Wit and Anecdote: The Crème Chantilly of Culture

Scheduled for publication in another 15 years or so, the next edition of the Oxford English Dictionary will contain over 600 definitions of the word “run.” To some of us, that figure seems impossible. We run in a footrace, yes, and we also “run to the store” while driving our car, a candidate “runs” for governor, Sally’s nose is “running,” and Wolftrap Run in Virginia is a stream. But hundreds of definitions?

To the consternation of those trying to learn English and to the delight of native speakers, many words in our eccentric tongue have multiple meanings. “Wit” is just one member of this boisterous crowd.

Ask a professor of 17th-century literature to define wit, and he will delve into metaphysical poetry, expound on conceits—there’s another word colored with several shades of meaning—and possibly point you to a poem like John Donne’s “Batter My Heart, Three-Person’d God” as an example of wit with its dissimilar and at times racy comparisons.

More familiar to us is wit when used as a synonym for raw or native intelligence. A progressive mom whose daughter has just announced that she intends to vote Republican in next week’s election runs (there’s that word again!) out of arguments to change the young rebel’s mind and so finds herself “at her wit’s end.” The guy with the disarming smile and ready charm who plays the horses at the track and hustles tourists in the Big Easy’s French Quarter lives “by his wits.”

Then there are those people who, as my online dictionary puts it, possess “a natural aptitude for using words and ideas in a quick and inventive way to create humor.”

At my elbow is a copy of “Bartlett’s Book of Anecdotes,” a compendium of more than 700 pages of snapshot narratives taken from the lives of the famous and the not-so-famous. Many of these brief encounters, such as the ones centered on figures like Civil War general Robert E. Lee or American author Willa Cather, are somber in tone, indicative of the character of the speaker. We read, for instance: “After the Civil War, Lee was encouraged to write his memoirs. He refused: ‘I should be trading on the blood of my men.’”

But the majority of these entries sparkle with a wit that often brings a smile.

The editors of “Bartlett’s” offer a lavish smorgasbord of talented personalities who could turn a phrase into a chuckle. Politicians, military commanders, actors, artists, and athletes—if they possessed a silver tongue for repartee, they likely appear in this goulash of zingers and sly humor.

Our 16th president, for instance, was renowned for his folksy wit. After his election in 1861, Lincoln spoke to a crowd at Pennsylvania Station in Washington, who were anxious to catch a glimpse of his wife, about whom they were curious. Calling to her to make herself visible, the tall Lincoln said of his 5-foot-3-inch Mary Todd Lincoln, “Well, here’s the long and the short of it.”

This story about actress Zsa Zsa Gabor neatly sums up her sense of humor and her take on men:

A women’s magazine once printed the replies of a number of famous women to the question: “What is the first thing you notice about a woman?”
“Her way of speaking” was Agatha Christie’s reply.
“Her hands,” said Maria Callas.
“Her husband,” replied Zsa Zsa.

Anecdotes about the often-quoted—and often mis-quoted—Winston Churchill fill over four pages of this anthology. Here’s a lesser-known bit from his time as prime minister during World War II:

Before the battle of El Alamein, he summoned General Montgomery and suggested he study logistics. Montgomery doubted that he should become involved in such technical matters. “After all, you know,” he said, “they say that familiarity breeds contempt.” Churchill replied, “I would like to remind you that without a degree of familiarity we could not breed anything.”

Perhaps because they daily submerge themselves in language arts, “Bartlett’s Book of Anecdotes” is filled to a considerable extent with bits from writers, critics, and editors. Famed for his epigrams, Oscar Wilde naturally resides in this community. “In 1882 Wilde went on a lecture tour of the United States. A New York customs official asked if he had anything to declare. ‘No. I have nothing to declare’—Wilde paused—’except my genius.’”

And another: “Wilde died of cerebral meningitis in a hotel in Paris. He was offered and accepted a drink of champagne, remarking as he did so, ‘I am dying beyond my means.’”

American writer Dorothy Parker is remembered today as much for her acerbic remarks as for her poems and short stories. Here’s a sample from “Bartlett’s” of that wit at work: “Dorothy Parker once collided with Clare Booth Luce in a narrow doorway. ‘Age before beauty,’ said Mrs. Luce, stepping aside. ‘Pearls before swine,’ said Dorothy Parker, gliding through.”

And here’s another: “Looking at a toothbrush in their hostess’s bathroom, a fellow guest said to Dorothy Parker, ‘Whatever do you think she does with that?’ ‘I think she rides it on Halloween,’ was the reply.”

Like Wilde, G.K. Chesterton was a master of the epigram in his writings and in his conversation. A man of considerable girth, he often poked fun at his weight: “Chesterton’s vast bulk afforded him certain consolations. He once remarked that it gave him opportunity for gallantry. ‘Just the other day in the Underground I enjoyed the pleasure of offering my seat to three ladies.’”

In Joseph Epstein’s recent collection of essays, “The Ideal of Culture,” he includes “Wit,” a piece with C.S. Lewis’s notion that wit as currently employed “means that sort of mental agility or gymnastic which uses language as the principal equipment of its gymnasium.” Epstein embellishes this description, describing wit as “all verbal cleverness. Pun, epigram, repartee, amusing paradox, surprising juxtaposition—these are among the verbal machines on which, to stay with Lewis’s gymnasium metaphor, wit works out.”

While introducing us to a few such gymnasts, Epstein reminds us that some who are known for their verbal thrusts, especially television talk show hosts and comedians, most often hire a squad of writers to come up with their material. Their guests, too, often prepare for their appearance by devising in advance answers to questions they may be asked.

Epstein then wonders whether “dazzling wits are possible in our day” and concludes in the affirmative. He then remarks that Twitter might be the ideal vehicle for such amusements. He himself does not tweet—“to do so would be unseemly in a man of my august age”—but he makes a good point. As Shakespeare rightly noted, “Brevity is the soul of wit,” and tweets, limited as they are to 140 characters, should encourage those given to glittering aphorisms to become the Oscar Wilde of cyberspace. Such wordsmiths, Epstein suggests, might be called “twit-wits.”

Calculated wit is one thing, but the spontaneous spoken gem and its offspring, the memorable anecdote, appear to be rare commodities, and the writers who put these stories into print can increase their value by attention to style and detail. In “Bartlett’s,” for instance, the elegance and simplicity employed by the editors provide worthy frames that complement the artful witticisms.

Here in this anecdote of Benjamin Franklin is a final example of this spare, exquisite prose:

When Franklin was in France, he frequently used to play chess with the elderly Duchess of Bourbon. On one occasion Franklin put her king in check and then took it. “We do not take kings so,” remonstrated the duchess. “We do in America,” replied Franklin.

While most of us may lack such a ready store of linguistic pyrotechnics as these famous wits, we can take our pleasure secondhand by reading books like “Bartlett’s,” an encounter that blends learning, amusement, and even wisdom. In his Introduction to this volume, editor Clifton Fadiman, who died at the age of 95 before this manuscript arrived at the publisher, explains this sensation. He writes that anecdotes and the wit and wisdom they contain can “shake us out of our quotidian rut, minister a slight and salutary shock of surprise or delight. At its finest, an anecdote signalizes the intervention of the unexpected. It mounts a small-scale assault on the banality of normal intercourse.”

In other words, the gift of ready wit may belong to a select few, but we can all enjoy the unwrapping of the package.