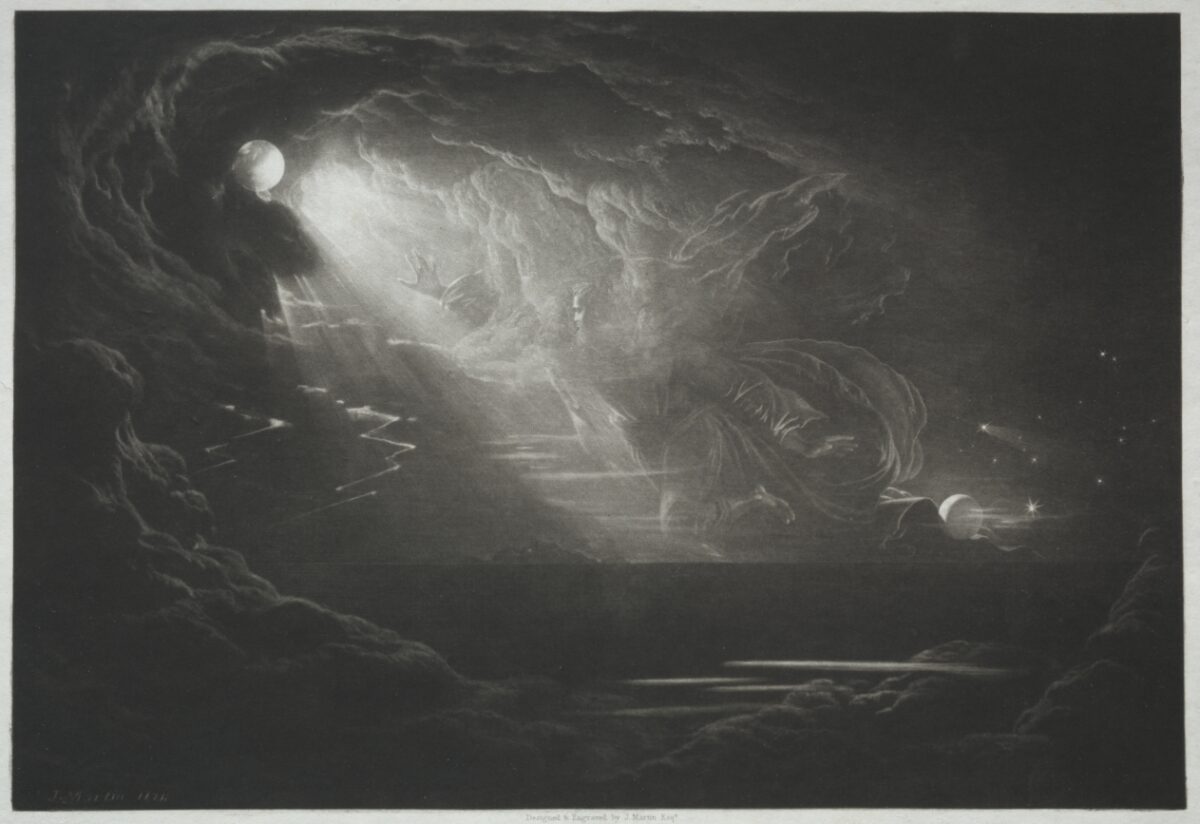 Sometimes things happen in life, and we just don’t know how to respond to them. Nowadays, there are many self-help guides that try to help people navigate their lives wisely. We want to behave wisely, but what is wisdom?

An illustration by the 19th-century artist John Martin, called “The Creation of Light” might give us insight into the nature of wisdom.

In 1824, Martin was commissioned by publisher Septimus Prowett to illustrate John Milton’s 17th-century book “Paradise Lost.” “Paradise Lost” is an epic poem about the Fall of mankind in which Adam and Eve were tempted by Satan to eat fruit from the Tree of Knowledge and were exiled from the Garden of Eden as a consequence.

The Creation of Light

One of Martin’s illustrations is called “The Creation of Light,” and it depicts part of the seventh book of “Paradise Lost.” The design shows a cavern of dark, swooping clouds separating to reveal the light of the sun on the upper left side of the composition and the moon and stars on the lower right side. Below is  a vast and calm sea.

In the middle of the composition is God. It is common for Jesus to be represented throughout Western art history but very unusual for God to be represented. Here, Martin depicts God as a translucent being who, with a gesture of his hands toward the sun and moon, separates the clouds to reveal light.

So, how exactly might Martin’s print suggest wisdom? We can presume that the scene was completely dark before God created light. In the image, God allows the light of the sun and moon to shine forth by separating the clouds that obscure it.

What does light do in our world? Light reveals the appearance of things and allows us to easily discern one thing from another. It also allows us to gather knowledge about those things that are illuminated. In other words, the light represents the truth. Our ability to discern according to our understanding of truth corresponds with our ability to be wise. Here, the light of the sun doesn’t represent just any truth. It represents divine truth, and this is why it is God who reveals this light. Divine truth—represented by the sun—also makes its effect known in the darkest times and areas by reflecting off of the moon and illuminating the night.

The representation of God himself may give us more insight into what is meant by divine truth. God is depicted almost like a translucent spirit, which suggests that God and the divine truth he sets out to reveal is beyond the world and is of a spiritual nature. Not only does God separate the clouds so that the light can be revealed, but in separating the clouds, he also reveals the order of the universe: that the sun is to the east and the moon and stars to the west, and that the sky is above and the sea below. Does this suggest that wisdom can be found in how the universe is ordered and harmonized?

The revealed night sky and the sea are presented as deeply calm and mysterious. Might it be the case that the mysteries of divine truths are revealed when we achieve a state of deep calm? The sun, however, doesn’t seem calm at all. The sun’s rays almost seem to blast forth their luminance through the night sky as if momentarily splitting it open. Might these compositional elements represent the power of divine truth?

To me, all of this suggests that wisdom is the ability to discern truth, and truth is discernible only by way of God. How might we recognize the truths illuminated by God so that we may live our lives with wisdom?