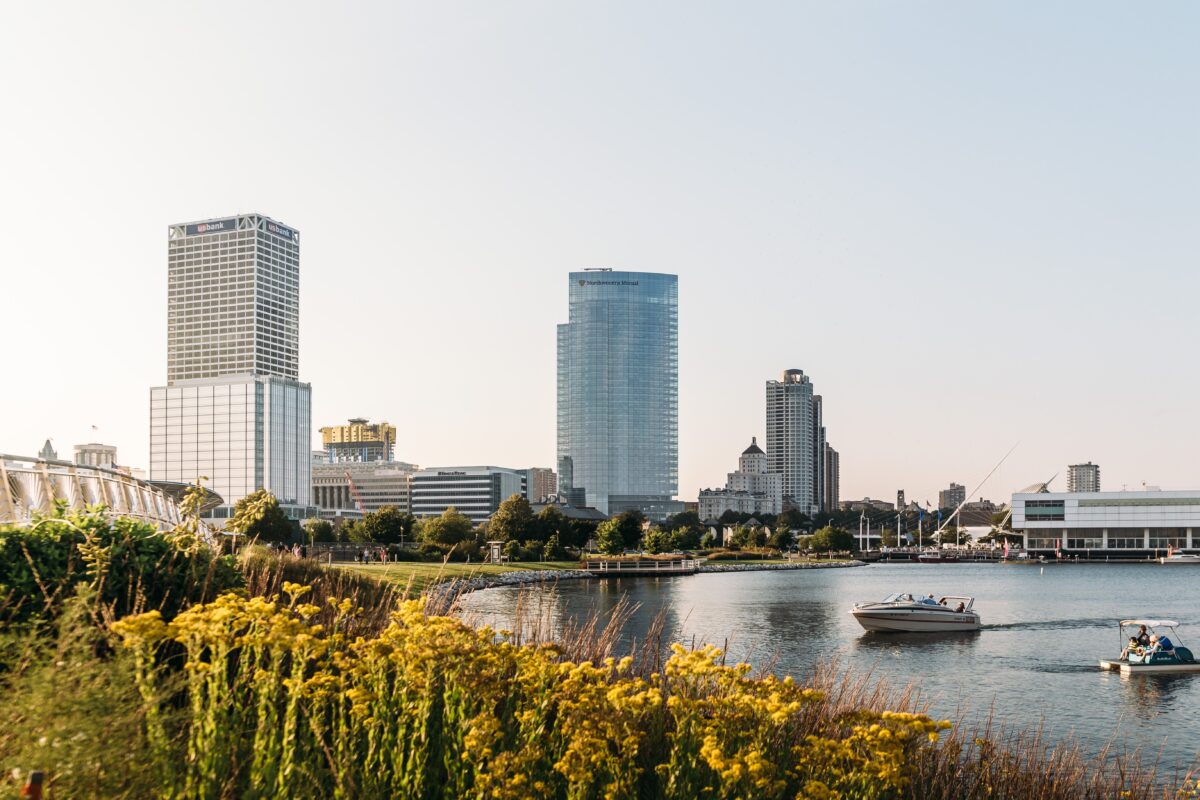 Closing your eyes on the train and listening to the rhythmic clickety-clack of the wheels on the track, you can almost imagine what it was like to travel by train in the early 1800s. The mode of travel is faster now, but you’ll still enjoy the inside glimpse into America’s backyards, the ever-changing scenery from coast to coast, and train depots centrally located to allow you to detrain in the center of a city.

While regional trains are used daily in larger metropolises—often as a work commute—the off-the-beaten-track smaller cities found along Amtrak’s train routes are less-traveled but bring a closer look at small-town America. One such route is the Empire Builder train that runs daily from Chicago to either Portland or Seattle, where you can step off the train in three Wisconsin cities: Milwaukee, Wisconsin Dells, and La Crosse, each with a unique vibe and draw.

To begin a train ride through Wisconsin, either take the train from Chicago in just under an hour and a half or fly into the Milwaukee airport and make a short drive to downtown. Milwaukee, located on Lake Michigan, is famed for its architecture, art and history museums, and beer, among other things, and it’s a walkable city to explore for a few days before boarding the train to Wisconsin Dells.

Milwaukee history is deeply fermented in beer. The city is referred to as Brew City, and at one point it was considered the beer capital of the world. The city’s first brewery opened in the 1840s. World-famous beer brands Pabst, Schlitz, Miller, and Blatz all originated there. To discover this brewing history, start with a tour of Best Place at the Historic Pabst Brewery, where you can tour the original location of the Pabst brewery and learn about its history. Sample a Pabst Blue Ribbon during the tour, then take a short walk around the corner to visit the Milwaukee Brewing Company for a beer flight.

To take in the architecture, parks, and a museum or two, allow time to walk the Milwaukee Riverwalk and the 20-block path along the river, discover museums and the Lakefront Brewery at the Lakefront area, and visit the revitalized warehouse district, the Historic Third Ward, for art and shopping.

The train departs at 2:19 p.m. from the Intermodal Station. If you’re wanting to sample more Milwaukee beer before boarding the train, stop by the Explorium Brewpub, just a short walk from the station.

An Abundance of Water Parks

After boarding the Empire Builder in Milwaukee, it’s a relaxing three-and-a-half-hour ride to Wisconsin Dells. There’s time to enjoy dinner in the dining car, or grab a snack from the café car and sit in the sightseer lounge, also known as the observation car, to watch the fields and houses pass by. Depending on the time of year, the sun makes a glorious exit above the fields and waterways as you move toward the city.

Detrain in Wisconsin Dells with plenty of time to check into your hotel and have dinner. For the best view, stay at The Vue Boutique Hotel, overlooking the Wisconsin River.

Wisconsin Dells is undoubtedly a tourist destination but with unique charm. It boasts water parks, go-karts, and plenty of souvenir and fudge shops. From the hotel, it’s a short stroll on the way to downtown along a scenic pathway by the river, which is lined with placards offering historical information. There, you can walk the main strip for shopping and amusement parks.

Depending on the season, enjoy indoor activities in the winter, such as axe throwing at Asgard Axe Throwing, indoor water slides, a cocktail at Showboat Saloon, one of the oldest bars in the area, or authentic Guam food and drinks at Latte Stone Brewery. In the summer months, discover one of the many water parks, take a Wisconsin Dells Trolley winery tour, or book a boat ride on the Wisconsin River.

The train station is conveniently located downtown, so it’s an easy walk to the station to board the train at 5:49 p.m. for the ride to La Crosse—an hour and 22 minutes. The small station isn’t manned, but there is an interior waiting area. Step outside the small station to watch as the Empire Builder arrives. You’ll hear the train in the distance before it suddenly whooshes up to the platform.

The last train station on a ride through Wisconsin is a short drive away from downtown La Crosse. The city is known for its scenic Riverside Park, where visitors can walk the path along the river, sit and watch the water, and perhaps see a large steamboat take port at the levee in the park. Visitors can also take a sight-seeing cruise on the La Crosse Queen, a modern-day replica of a 1900s riverboat.

This walkable city features numerous bars and fine dining at Lovechild, the Turtle Stack Brewery, La Crosse Distillery, and plenty of shopping. Since this is Wisconsin—which is known for its cheese—stop by TJ’s Cheddarheads to stock up on some food souvenirs for the trip home.