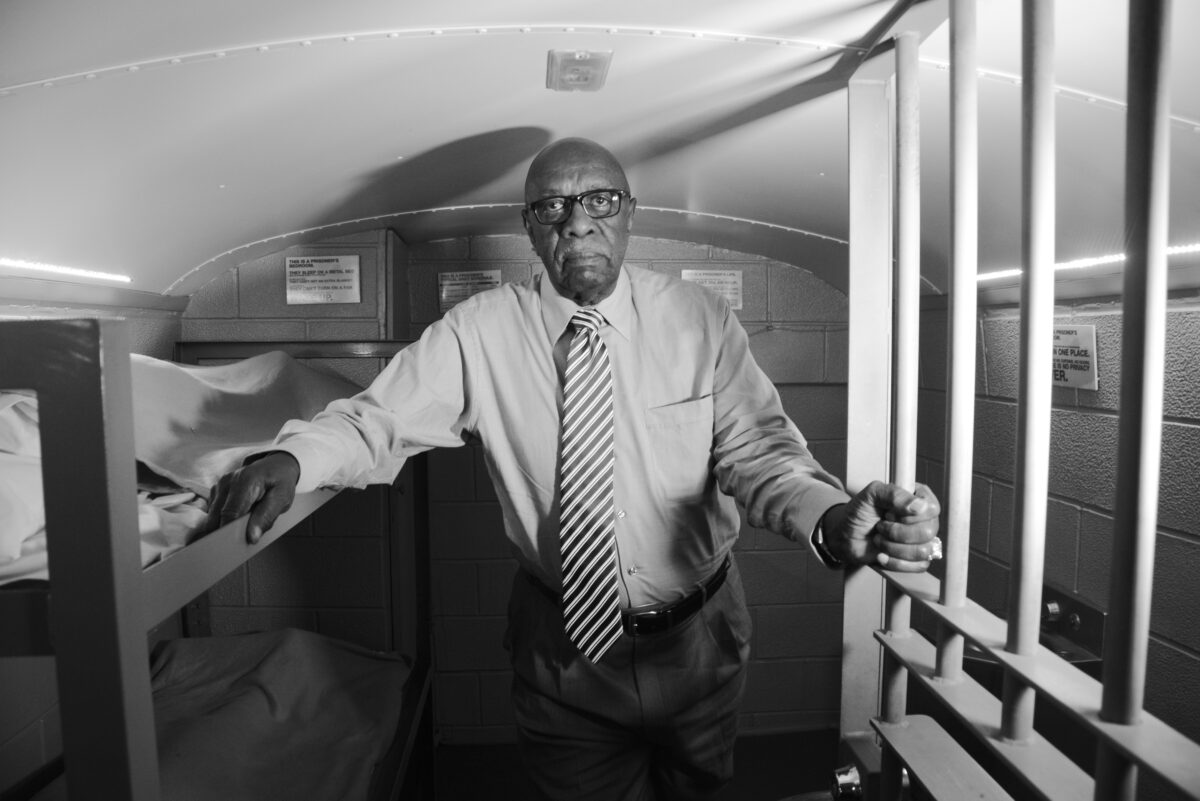 The program is rooted in the belief that education is the key to staying away from a life behind bars. (Karim Shamsi-Basha for American Essence)
American Essence

Winnowed by the Hardships of His Youth, This Top Ad Executive is Now an Advocate for Keeping Kids in School

Once a homeless kid, Shelley Stewart became CEO of a multi-million dollar firm. But his greatest impact might well be helping youths stay in school
BY Karim Shamsi-Basha TIMEJuly 18, 2022 PRINT

Shelley Stewart was 6 years old when he watched his alcoholic father, Huell Jerome Sr., kill his mother, Mattie C., at their Rosedale home in Alabama. This was back in 1939, and there was never an investigation. Shelley ran away shortly after and became homeless. A family took him in to live in their basement, and he remained in school at Rosedale Elementary. Mamie Foster, his first-grade teacher, told him what would turn his life around: “If you learn how to read, you can be anything you want to be.”

Shelley did well in school and became a successful radio DJ, hanging out with BB King, Nat King Cole, and Odis Redding. During the ’60s, the outspoken radio star became a target for the KKK. They spray-painted his studio with death threats, but Shelley continued the fight. In 1967, his friend Cy Steiner asked him to partner with him. They started O2ideas, which became one of the leading advertising agencies in the country.

On a recent day, Shelley gazed from his office window at what used to be a lake—now Lakeshore Boulevard in Birmingham. He pointed out the window and said, “I used to catch catfish from this creek when I was homeless. I spent a lot of hours trying to catch what I ate that day.”

Now the former homeless kid is the Chief Executive Officer of a multi-million dollar firm. Shelley knows the key to this incredible transformation: education, which is his current mission with The Mattie C. Stewart Foundation.

Shelley admits he had what some folks might call a guardian angel watching over him during his entire life. “Mattie C. looked after me since that day in Rosedale. Her lovely spirit has guided me and protected me. [When I was 65,] she said to me, ‘You have not done what I asked you to do, I want you to teach and share a message of education.’”

Shelley softened his gaze out of the window, summoning her spirit upon the memory. “I was not a teacher. I questioned her, but she insisted. A few days later, The Mattie C. Stewart Foundation was born.” The mission statement of The Mattie C. Stewart Foundation says it all: “Created to help educators, community leaders, and other interested groups reduce the dropout rate and increase the graduation rate through the creation of relevant and effective tools and resources.”

Shelley got to work. In 2008, he created the Inside Out documentary film from his interviews with prisoners serving a life sentence without parole. He discovered a considerable connection between dropping out of high school and incarceration.

“I found out that 75 percent of prisoners were high school dropouts. Imagine, had they stayed in school, we would have much fewer folks in prison,” Shelley said.

To promote staying in school, Shelley started the Choice Bus program through The Mattie C. Stewart Foundation later the same year. The bus has a dramatic effect. Half of it is a classroom, while the other half is a jail cell with metal bars—showing the grim reality of what could happen if you dropped out of school. Over 3 million high school students on 7,300 campuses across the country have visited the Choice Bus.

Sherri Stewart is the Executive Director of The Mattie C. Stewart Foundation. “We don’t preach to these kids; we listen. Most adults tell kids what to do. We ask them about their lives, about their hopes, about their dreams,” Sherri said. “Then we show them that staying in school is the best way to achieve these dreams. Working with The Mattie C. Stewart Foundation has humbled me greatly. To know that we’re touching lives, it’s incredibly gratifying.”

At the age of 88, Shelley continues to carry on the mission of The Mattie C. Stewart Foundation with documentary films, speaking opportunities, and other programs. “What The Mattie C. Stewart Foundation provides are tools to fight poverty and lack of education. The Choice Bus is a tool. The Inside Out documentary is a tool. We give folks the tools to improve their quality of life. We are a grassroots effort. We appeal to the masses, not the classes.”

From a homeless kid to a business leader to an education promoter, Shelley Stewart’s legacy will help high school students achieve their thriving hopes and their burgeoning dreams.