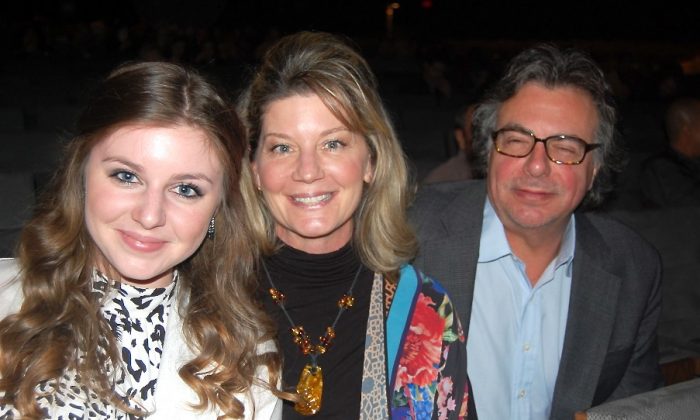 DALLAS—Byant and Jude Morton saw Shen Yun Performing Arts with much excitement at the Winspear Opera House in Dallas, Jan. 4.

“The costumes are magnificent, and [it’s] just a great experience for us. We’ve never seen anything like it,” said Mr. Morton, director of merchandising at William Noble Rare Jewels, one of the largest estate dealers in the Southwest.

New York-based Shen Yun revives 5,000 years of Chinese civilization through traditional Chinese dance, music blending East and West, an animated backdrop, and brilliant costumes in an all-new performance every year. The company was established in 2006 and has been touring internationally for eight years now.

Mrs. Morton had been very touched by a particular piece she saw in Shen Yun. The Steadfast Lotus, told the story of a mother and daughter who practice the spiritual discipline Falun Gong, also known as Falun Dafa, which upholds the traditional values Shen Yun had presented throughout the dynasties. However, in China today, Falun Gong is persecuted by the current regime.

Mr. Morton agreed, “that one was the most meaningful for me.”

The performance had left the couple with a feeling of hope for the future. “It’s now, it’s our time,” Mr. Morton said, hopeful that China would again be able to adapt the principles he saw.

Ms. Sherry Schermerhorn, who works in life insurance, was also in the audience and moved by the piece.

Ms. Schermerhorn said she had been moved to tears seeing the mother and daughter’s story, and felt a range of emotions as the performance went on.

“It was just a really amazing experience,” Ms. Shermerhorn said. “It helps me to understand that the Chinese culture … isn’t what it is. We’re such a world away.”

‘It was just beautiful’

Also in the audience was Mr. Francisco Javier Salinas, who came to see Shen Yun on a recommendation from a friend who lives in China. His friend had heard news about Shen Yun being in New York and told Mr. Salinas to see the performance, so when Mr. Salinas found Shen Yun performing in Dallas near him, he decided he needed to go.

Mr. Salinas is very familiar with many East Asian countries as he does business internationally and often in Asia. However, the traditional Chinese culture Shen Yun presented was new for Mr. Salinas as well.

“It’s a very different culture, and I enjoy it,” Mr. Salinas said.

Mrs. Barbara Morris had also attended the performance, flying over from El Paso to see the performance. Mrs. Morris’s three daughters live in Dallas, and had flown their mother in when they heard the performance she had been waiting to see was playing at the Winspear Opera House.

Ms. Holly Lanahan had grown up wanting to be a ballet dancer and danced for years and her sister Ms. April Spicer, a vice president in finance at Wunderlich Securities, had watched her sister and learned as well.

“I’d never seen anything like it,” Ms. Lanahan said. “It’s just amazing, the sets, the costumes, the dancing, all of it, it’s just amazing. I really love it.