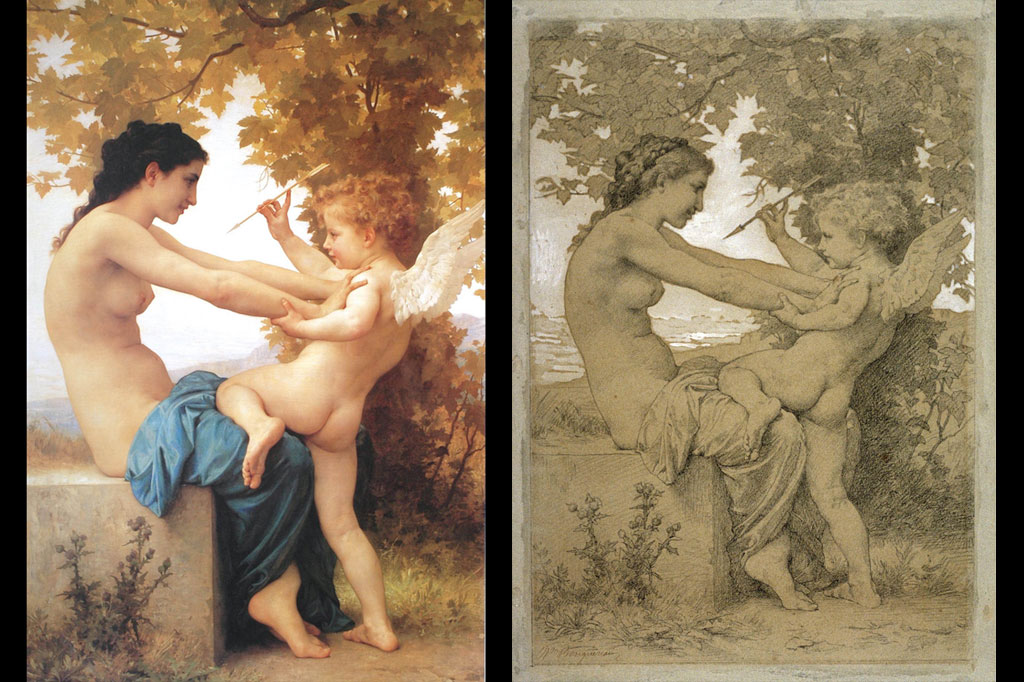 The Flagler Museum in Palm Beach, Fla. will be holding an exhibition titled Bouguereau’s Fancies: Allegorical and Mythological Works by the French Master which will be open from Jan. 27–April 19, 2015.

Bouguereau’s ‘Fancies’ will exhibit, among other works, three versions of the artist’s famous painting, “Jeune fille se defendant contre l’amour” (young girl defending herself against love): the original life size version, the reduction, and a fully worked out drawing. Although the Flagler is the organizing museum, it will also include works from the Appleton Museum of Art; the Cummer Museum of Art & Gardens, Jacksonville; Dahesh Museum of Art, New York; Fine Arts Museums of San Francisco; Frye Art Museum, Seattle; the J. Paul Getty Museum, Los Angeles; Hillwood Estate, Museum & Gardens; University of Michigan Museum of Art; and the University of North Carolina at Wilmington.

During the latter half of the 19th Century, William Bouguereau (1825–1905) was the most well-known artist in all of France and his fame extended across Europe and America. He was a known fighter for justice and donated considerable amounts of time to help the poor and the misfortunate. He won almost every honor, award and accolade available to a French painter, starting with the Prix de Rome in 1850. He became a professor at the Ecole des Beaux Arts in 1875, and was one of the longest serving members of the Institute starting in 1876 till his death in 1905.

In 1885 Bouguereau served as President of the Institute presiding over all five of the academies. In this same year Bouguereau was elected president of the benevolent association founded by Baron Taylor, whose goal was to accumulate funds to help support less-fortunate artists and their families. At the funeral of Victor Hugo, the most beloved poet and writer in France, Bouguereau was chosen to give the graveside eulogy as he was as beloved for painting as Hugo was for literature. He was one of the head instructors at the Academy Julian and became the President of the Société des Artistes Français. He was a jury member for the Exposition Universalles of 1889 and 1900 and finally Grand Officer in the Légion d’Honneur in 1903.

William Bouguereau was interested in a wide variety of subject matter, but his oeuvre can be subdivided into six basic subsections, those being: peasant paintings, religious paintings, mythological paintings, nudes, portraits, and scenes of everyday life. Although Bouguereau depicts specific stories from Greek mythology on many occasions, such as in his three separate versions of the “Ravissement de Psyche,” Bouguereau also used mythological creatures, often cupids and Eros specifically, in order to create allegorical works pertaining to the power of love in both its constructive and destructive facets.

In the case of “Jeune fille se defendant contre l’amour” (1880), Bouguereau combines the science of human anatomy with mathematical precision and marries it with the well-known cupid from Greek mythology in order to create an allegorical work that can symbolically communicate its message through realistic imagery. The face of cupid bares an expression of determination as he pushes forward, arrow in hand against his unarmed victim.

He tries to climb onto her lap, as he ready’s his arrow, which is already aimed at her heart. The girl is vulnerable to love’s power, symbolized through her naked form and although she holds him at bay with both arms, she appears to smile as if enchanted, gazing into Eros’s eyes. From this the viewer can tell that the battle has already been lost and the arrow is soon to be plunged into her heart, filling it with passion.

It would seem as though Bouguereau was attracted to the beautiful yet violent Eros as a truthful representation of love, arguably the most powerful of human emotion. Flowers had important iconographical meaning in 19th century painting. The thistle, lower left, being a tough and durable plant sometimes represents defiance against aggressors, but also has associations with hardship and pain. Hardship and pain are also sometimes associated with love and is most likely the reason for the girl’s resistance to it. The thistle appears as a symbolic element in several of Bouguereau’s works, including an important work from the previous year, “Jeunes Bohémians” (1879).

Bouguereau was a tireless worker and on top of family responsibilities and all the administrative duties that came with the various offices he held, Bouguereau painted a total of 828 known finished works, mostly life size canvases and many with multiple figures. This makes Bouguereau one of the most prolific of the academic artists.

“I fill every moment with painting, with painting furiously. First of all because that is what I love—and then just look at my white hair. At my age it gives pause for thought, and an hour lost can never be recovered. Look at these portfolios filled with sketches and drawings. Perhaps I would need more years than I have left to live. As soon as I finish painting I know which portfolio contains such and such a sketch, and I start on a new canvas.”

For Bouguereau, planning the composition of his paintings was no easy task, trying many different renditions over and over again until he settled on the final composition. From studying Bouguereau’s sketches, one can learn a lot about the work method and the thought process that went into his creations. The importance of the preliminary work was of primary importance to Bouguereau and the drawing and layout of his work reportedly took longer than the execution of the final painting.

Jerome Doucet wrote that for Bouguereau “the composition was the only real work, once his subject was decided and laid out on canvas, he painted with astonishing ease.”

One of his students, Emile Bayard, corroborates this observation: “On the floor surrounding each painting all kinds of sketches and drawings lie here and there, in the disorder of work. Only this preparatory period holds the artist up for a few moments, since for him the actual execution is nothing'”

At the exhibition at the Flagler one drawing will be shown and although it was possibly created after the painting for illustration purposes, one can learn a lot from it about Bouguereau’s draftsmanship. Before creating the finished painting, the artist would have first created several thumbnails to work out the general placement of the figures, after which he would have worked on the specific anatomical renderings in pencil for each figure independently and then together, with special attention to the faces and hands, as well as color studies in oil before setting to work on the final canvas.

Bouguereau’s finished reductions were created after the original painting, mostly at the request of his dealer, Goupil, as is the case with the reduction for “Jeune fille se defendant contre l’amour.” These reductions were sold to collectors who either could not afford the full size painting or could not acquire the original because it had already been sold. Bouguereau would not make second full size versions of the same painting with only one known exception early in his career. It will be wonderful to see the original work, the reduction, and a fully worked out drawing hanging together at the Flagler Museum.