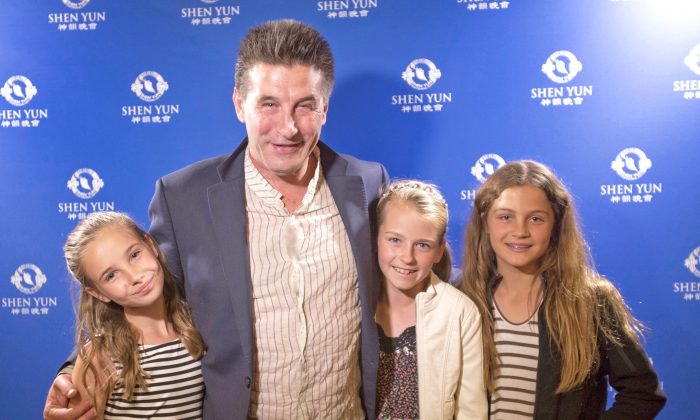 William Baldwin with his daughter Brooke, and Amelia, and another friend, after watching Shen Yun Performing Arts at the Granada Theater in Santa Barbara on the evening of April 30, 2016. (Courtesy of NTD Television)

SANTA BARBARA—In the 10 years TV and film actor and producer William Baldwin has spent in Santa Barbara, he says he has experienced much of the arts and culture prevalent in the area. But he had never seen anything remotely similar to Shen Yun Performing Arts.

Mr. Baldwin, third of the Baldwin brothers, brought his daughter Brooke and friends to see the performance at the Granada Theatre on April 30, and all were pleasantly astonished.

“It was, you know, breathtaking. And surprising,” said Mr. Baldwin. The most surprising for him, he said, was the powerful message of freedom that came through.

The performance, in reviving 5,000 years of Chinese civilization, also pointed out that this traditional culture has been pushed to the brink of extinction in China, deliberately, by the communist regime as it came into power over 60 years ago.

The stories New York-based Shen Yun told through music and dance showed the values and aesthetics of the dynasties past, as well as characters who still hold on to traditional values and faith in modern times. The company explains in the program that it was formed by artists from around the world a decade ago, in order to share the authentic traditional Chinese culture with the world, for fear it had all but been lost under the communist regime.

“I wasn’t expecting it to be as powerful as it was in that way,” said Mr. Baldwin, who had been explaining to the girls during the performance things like freedom of religion and freedom of expression, which we take as a given in the United States, but aren’t rights freely enjoyed in China.

Between each dance and number, the emcees also came out on stage to explain the history of the vignettes the audience members were seeing, which Mr. Baldwin said only added to their appreciation.

He was not aware what a spiritual culture China had, until witnessing projected song lyrics and scenes about the Creator and the heavens. Deities are commonplace in the folklore and legends told, and the historic figures depicted held veneration for the divine.

“It was a true history lesson about the tradition of political oppression, but also artistic expression about ethnicity, about tradition. It just was a lot of grace in the performance tonight,” Mr. Baldwin said. “It was startling and breathtaking, and we learned a lot.”

He enjoyed that it was told through great choreography and tremendous discipline. He said you could see the amount of effort that had to have gone in to it, such that the orchestra and dancers, “they’re finishing each others sentences.”

“I love the historic and cultural things that [Shen Yun is] sharing with us here,” he said.

Brooke, who does traditional ballet, hip-hop, jazz, lyrical dance, was excited and inspired to see classical Chinese dance, which the emcees explained was an independent dance system thousands of years old.

“It was so amazing and inspiring. Those dancers were amazing. I wish I could be as good as those dancers. I also dance, and both these girls with me also do, and it was inspiring, amazing, and I love the special effects and it was awesome,” Brooke said.

“It was so amazing,” she said. She had turned to her dad, saying, “I want to try this dance!” during the performance as she saw the different movements and style.

“I think that I learned more in this performance than I actually do in a whole week of school,” Brooke said.

“She goes to a very good school too, so if she learned more tonight than she does in a week, that must be a lot,” Mr. Baldwin added.