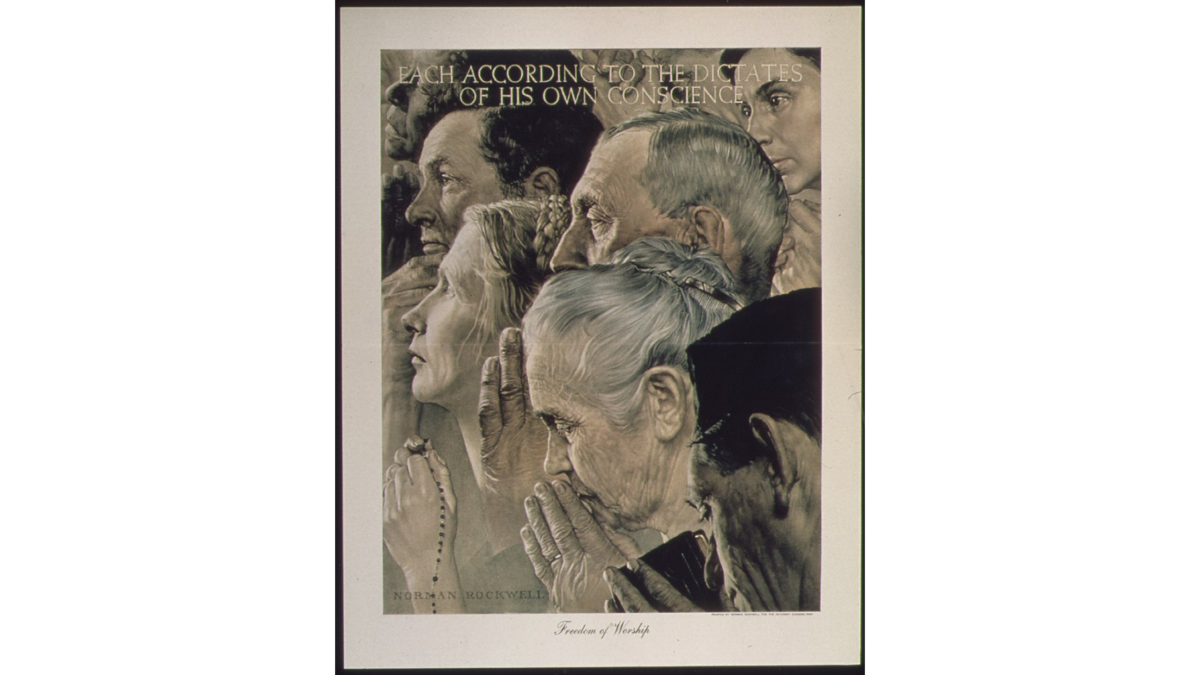 "Freedom of Worship," 1943, by Norma Rockwell. .” In his short essay, “Freedom of Worship,” Will Durant highlights the true value of this freedom by contemplating the little white church that he passes by on his walks. U.S. National Archives and Records Administration. (Public Domain)
Books

Will Durant’s Essay ‘Freedom of Worship’: A Story About a Little Church

“Each according to the dictates of his own conscience.” This phrase, attributed to George Washington, illuminates the top of Norman Rockwell’s painting “Freedom of Worship,” which shows eight people praying. These individuals show their own form of worship, whether it is pensive, thankful, patient, sad, petitioning, or filled with wonder. Some look upward, others bow their heads, while others firmly shut their eyes. And despite the difficulties, fatigue, and sadness that show on the faces, overall a sense of hope remains.

The Saturday Evening Post commissioned author Will Durant in 1943 to write an essay to accompany Rockwell’s painting “Freedom of Worship.” In his short essay, also titled “Freedom of Worship,” Durant highlights the true value of this freedom by contemplating the little white church that he passes by on his walks.

Durant considers the “wonder and the longing that had built such chapels—temples and mosques and great cathedrals—everywhere on the earth.” He shows that this awe and yearning differentiate humans from animals, for a human being, unlike animals, prays and laughs.

A World Beyond Words

When people enter a place of prayer, they enter a special place to worship, each in their own way. Durant says that worshipers seem to know something that is not found in books. They cannot describe what they know and believe, for their religion “lives in a world beyond words, or thoughts, or things.”

Those who possess religion grasp the “mystery of consciousness.” Though they cannot explain this consciousness through words, they know, by faith, that they are more than just creatures that crawl on the earth. G.K. Chesterton explains this faith in “Heretics,” a collection of his essays: “Whatever may be the meaning of faith, it must always mean a certainty about something we cannot prove.”

People who worship a higher good see nature, people, and the heavens move and change with the passing of the seasons. They sense a power and order beyond themselves, of which they are also part. Although they experience fear, turmoil, and ultimately death like everyone else on earth, they are aware that there is something more, and they place their hope in that higher power.

Religion revives, invigorates, and enlivens the everyday prose that fills the everyday world. Prayers elevate people beyond their everyday selves to become more gentle and peaceful. And the commandments that accompany these religions make men, as Durant says, “part of a divine drama, and their harassed lives take on a scope and dignity that cannot be canceled out by death.”

Freedom for the Soul

Durant says that the little church is the ultimate symbol of America and the freedom of worship. Families crossed the sea to build such churches. They sought to escape from those who would take away their freedom of worship in order to “win freedom of their souls, to think and speak and worship as they would.”

Religious persecution challenges and steals this freedom from humankind. Without the freedom to practice their faith, people are left with war and the state as their God. Without religion and faith to guide and enlighten the people of the world, the world will fall to the basic definitions, laws, and rules that force humankind to live against its conscience.

For years people have fought to keep or win back their freedom of worship—they have proven the most admirable martyrs. Through their deaths, they prove to us all that prayer and worship is sacred and inviolate. They have been exemplary images of gentleness and charity, rather than struggle and violence. As Shakespeare says in “As You Like It”: “Your gentleness shall force More than your force move us to gentleness.”

Durant says that those who leave that little church should respect those who worship differently or practice a different religion. They know that every person is trying to follow the direction of his conscience and better himself accordingly.

By encouraging ourselves and those around us to seek virtue and live lives in the poetry and song of our hope, we keep the freedom of worship alive. When we practice charity and gentleness toward our neighbor, we help each other live according to our consciences and we uphold the human spirit that strives to surpass life’s prose.