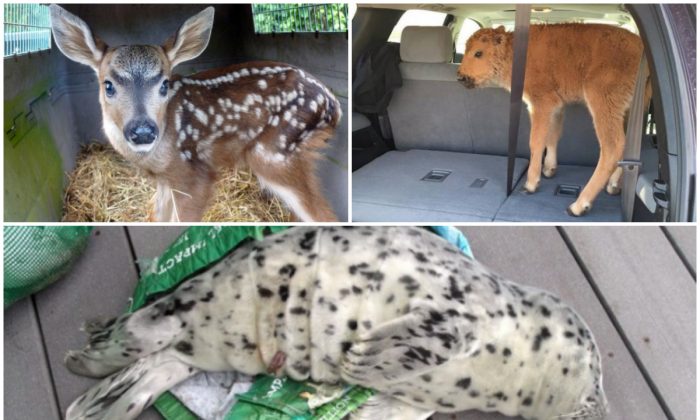 Top left: A fawn snatched from its mother in Pierce County, Wash. (Washington Department of Fish and Wildlife); Top right: Bison calf in Yellowstone National Park that two tourists placed in their car trunk out of concern for its livelihood. (Photo taken by Karen Richardson); and Bottom: A baby seal is seen laying across a shopping tote used to carry it off a beach in Westport, Wash., May 21, 2016. (Marc Myrsell/Westport Aquarium via AP)
Animals

Why You Shouldn’t Help Baby Wild Animals… Unless You Should

While people’s compassion for wildlife should be encouraged and nurtured, sometimes it’s expressed in a way that proves fatal for the very animals they intended to save.

At least five times this season, well-meaning people have illegally picked up seal pups in Oregon and Washington, thinking they were abandoned or needed help. But that interference ultimately resulted in two deaths, said Michael Milstein, a spokesman with the National Oceanic and Atmospheric Administration (NOAA) Fisheries.

State wildlife officials had to euthanize a harbor seal pup last month after a woman picked it up on a beach in Westport, Wash., and apparently carried it back to a house in a shopping tote. The animal was unresponsive and lethargic, Milstein said.

Another couple found a seal pup on the beach in Garibaldi, Ore., and fearing the animal was abandoned, wrapped the seal in a beach towel, drove it home, and then placed it in their shower, said Kristin Wilkinson, a NOAA Fisheries regional stranding coordinator. Wildlife officers returned that seal to the beach, but it was discovered dead the next day, she said. That couple received a written warning.

Harbor seal pups use beaches, docks, and other shoreline areas to rest, regulate their body temperatures, or wait for their mothers—who are typically nearby but may not come near the pups if there are too many disturbances.

The issue is not limited to seal pups.

“We recently had a situation where someone picked up a newborn fawn and left it at a fire station,” said Tina Hamilton, statewide dispatcher for Washington Department of Fish and Wildlife (WDFW). “That fawn still had its umbilical cord, so how far away could its mother have been?”

“People find young animals and birds alone and assume they’ve been abandoned by their parents,” said Mick Cope, WDFW game manager in a statement. “In fact, their parents are usually nearby and may even be watching as their fawns, kits, and chicks are removed by would-be rescuers.”

Deer often leave their young for hours at a time to forage and avoid attracting predators with their own body scent, Cope said.

In May, two foreign tourists loaded a lone bison calf in their car, fearing it may die if left alone, and drove it to rangers in Yellowstone National Park.

Later, Deby Dixon, a photographer documenting local wildlife, confirmed the calf had been abandoned for a few days already.

But the rescue was still futile. The rangers tried unsuccessfully to reintroduce the calf to a herd, and in the end euthanized it.

Sometimes, a rescue can be successful.

In June, Naude Dreyer, a kayaking guide, spotted a small stranded dolphin on southwest African beach in Namibia. He picked it up and carried it back into the ocean. He later posted video of the rescue on Facebook.

Yet this case highlighted an important difference—Dreyer apparently knew what he was doing.

“I work with a local Stranding network,” he wrote on Facebook. “I did an assessment, saw no visible cause for the stranding, and took him back into the water. He took off immediately.”

Cetacenas never haul out on land, “so a dolphin, porpoise, or whale stranded on land is always in danger,” The Marine Mammal Center (MMC) states on its website.

“[F]or most of us, it is only natural to see a wild animal in distress and want to help it survive. That makes us caring human beings, not monsters,” wrote Deby Dixon, the photographer, in an article for National Parks Traveler.

And, to confuse matters, one in four bison calves in the Yellowstone gets abandoned, even without human interference.

Past numbers indicate about 300 bison are born in the park each year. That means dozens of calves get abandoned every year, “but those deaths will benefit other animals by feeding everything from bears and wolves to birds and insects,” the park administration explained in a Facebook comment.

People should pause, take a step back, and call local authorities who know best what to do with animals that look stranded, according Dr. Jeff Boehm, MMC executive director in Northern California.

In addition, one can volunteer for some of the organizations that care for wildlife, like the NOAA’s Marine Mammal Health and Stranding Program.

In general, approaching wildlife is a bad idea.

“If people want to help, we ask that they give young wildlife a wide berth and restrain pets that might harass them,” Cope said.

“In all of this, there’s one takeaway we really want to underscore: please give animals space. Stay at least 100 yards away from wolves and bears, and at least 25 yards away from all other animals. Help us make it socially unacceptable to do anything else,” park officials said.