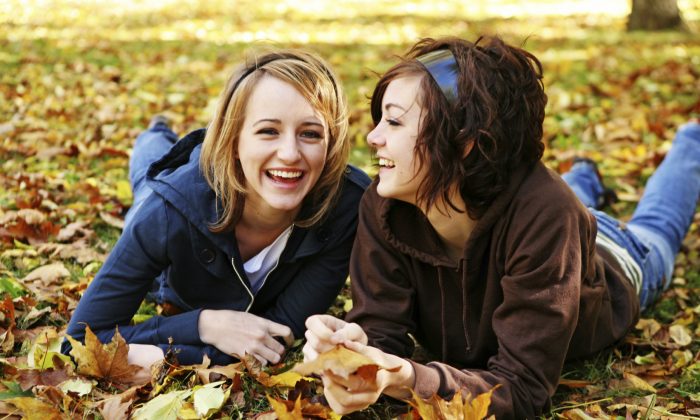 When you see your daughter, a coworker, a long time friend or even just a casual encounter, your first instinct may be to compliment her on her looks. Typically this practice has harmless intentions. But focusing on appearance can start to have an effect on the body image of girls as young as age five. This is largely due to exposure to media and the beauty industry from an early age, but it can also start in the home.

For women of all ages, there are compliments that go beyond appearance.

While raising children is a highly personal endeavor, experts actually suggest complimenting children on completing tasks or character-driven acts rather than appearance.

A recent ad campaign from Verizon highlights the statistic from the National Science Foundation that while 66 percent of 4th grade girls say they enjoy math and science, only 18 percent of engineering majors in college are women. The discrepancy between the two could have a host of causes; however, it is definitely possible that women are subtly swayed towards careers that are seen as more “feminine” by well intentioned parents or friends who comment on appearances rather than intellect.

For women of all ages, there are compliments that go beyond appearance. Next time you want to verbally pat a woman on the back, here are several approaches to try.

Compliment a Coworker on a Job Well Done.

48 percent of women cite coworkers as their reason for wanting to stay at their current jobs, so why not enhance the positive feelings between employees even more? Appreciating a co worker, whether it is a colleague or your own employee, is likely to make them happier and even more productive.

If She Gives Good Advice or Is a Good Listener, Take the Time to Express Your Gratitude.

Compassionate, active listening is a skill that seems to be diminishing with the advent of technology that allows us to communicate without a face to face meeting. Do you have a female friend or relative that supports you verbally through the tough times in your life? Letting them know how much you appreciate that will go miles further than just complimenting a new hair style.

Say a Few Kind Words About Her Skills, Be It Public Speaking, Athletic Prowess, a Way With Numbers or a Musical Gift.

No matter what age a woman is, skill-based compliments often get thrown out in favor of mentioning something based on looks. Our first instinct even when we see close friends is often to blurt out how nice they look. However, what if instead of just saying your friend looks nice, you mention something positive about their skills?

Is your friend a talented musician who impresses you even with her car karaoke? Tell her what a great voice she has! Did she co author a recent psychology study? Take the time to read it and mention what a good job she did. This type of compliment shows that you are genuinely engaged with the person rather than just saying the first thing that you notice.

Tell Her What a Great Friend, Mother, Wife, Etc. She Is.

While the women in your life may like to be reminded that you appreciate what they look like, they probably don’t hear enough about how much they mean to you. Telling them what a great job they do as a friend or mother will likely touch their heart in a way that mentioning appearance just can’t.

It is important to note that expressing gratitude for a genuine, appropriate compliment about your looks is an art form within itself. However, when the emphasis is placed on looks and nothing else, it can send the message that this is where the value of women and young girls is predominantly focused. Digging a little deeper will help to make sure that isn’t the case.

This article was originally published on www.Care2.com. Read the original article here.