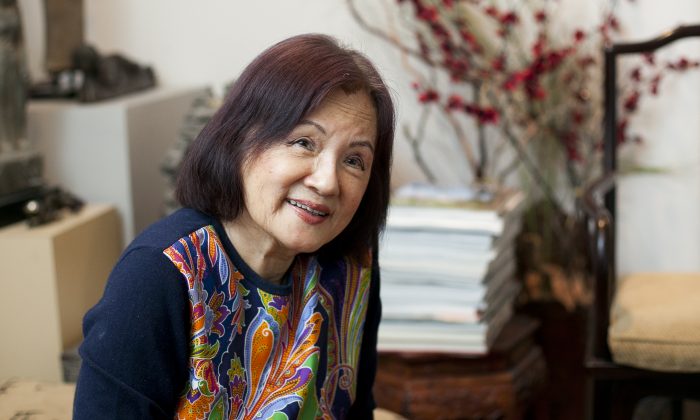 Why We Collect Art

In 1950, a 13-year-old Michael Gallis accompanied his mother to an antique store on Hyde Street near downtown San Francisco. There, he spotted a Tiffany silver vase that so captivated Gallis that his mother bought it for him.

“It was the first time I thought of owning a beautiful work of art—and it wasn’t a present—it was something I had an emotional and spiritual response to,” he said.

Over time he learned the art of understanding Chinese paintings from C.C. Wang, an artist and respected collector of Chinese art.

“First you need to have a response to the art, he told me. Then you need to learn,” Gallis said. “Many collectors feel they need to find an adviser. C.C. said you must know something about Chinese painting and make your own decisions.

“Collecting is about learning to see—seeing beneath the surface, seeing inside things. It changes the way you see life, things, people, and the universe. It’s not just the acquisition of a bunch of objects.”

Today, Gallis collects antique Chinese paintings, tribal sculpture, folk art, and occasionally Western art. He applies the principle of seeing beneath the surface to his business in consulting and real estate.

But, it’s different for everyone.

For years, scientists have tried to figure out human beings’ tendency to collect objects that are not essential to our survival—postage stamps, figurines, and art—by looking into our psychology and biology.

Sociobiologists posit that collecting behavior is a holdover from hunter-gatherer days. Others, who prefer a Maslow’s hierarchy of needs approach, offer the hypothesis that collections are meant to display social dominance, proving to others that the collector is able to expend resources on luxuries. In 2005, researchers at the University of Iowa found an area in the prefrontal cortex that regulates collecting behavior.

Yet none of these theories and findings are ultimately satisfying or complete. They don’t take into account idiosyncratic elements more difficult to measure—the ideal of beauty in objects, personal and cultural values, and personal experiences. They also neglect the forces of the marketplace, perceptions of objects’ historical significance, and social factors that may influence who collects, what they collect, and how.

The Frick Collection’s Center for the History of Collecting, established in 2007, aims to uncover the ways in which collections are born, grow, and bequeathed.

It studies the history of collecting fine and decorative arts in Europe and America, from the Renaissance to today and has begun an oral history project with living collectors.

The center is connected to the reference library of The Frick Collection in New York City.

“The more I look at the history of collecting, the more I think it’s as confusing as human nature,” said Inge Reist, the center’s director. “People could be influenced by friends, dealers, or they’re viscerally attracted to an artwork—and these things are all mixed up in different proportions in one person.”

Wong describes her younger self as a “lonesome child.” Growing up in 1940s Shanghai, she remembers hiding from the Japanese in bomb shelters during the Sino-Japanese war.

In 1958, she left for Hong Kong to strike it out on her own, eventually building an internationally successful womenswear brand. Meanwhile, the Cultural Revolution swept through the mainland, destroying countless national treasures and wiping out her family’s assets.

Throughout all this, beautiful objects were her friends; to this day she still keeps childhood dolls in her Upper East Side apartment.

“You become attached,” she said, recalling the time she sold a piece, missed it terribly, and begged to buy it back. The new owner refused.

Wong’s collecting philosophy is simple—whatever she likes, she buys. If she can’t afford it, she doesn’t mind buying a print or waiting until a better opportunity presents itself. Luckily, she has a natural eye for quality works.

Museum curators visiting her apartment have dropped their jaws in surprise upon encountering a rare portrait of Emperor Qianlong’s brother-in-law, a military figure crucial to the Qing dynasty’s rapid territorial expansion.

It wasn’t always that Wang trusted her eye—her first ever purchase, an intricate cup carved from Chinese rhinoceros horn, was completely uninformed. She didn’t know that horn carving existed until she showed what she thought was a “beautiful wooden cup” to an appraiser.

“Over the years I found a lot of things that people thought were remarkable, but I didn’t believe it myself. I thought they were joking with me,” she said. “In the beginning I was just interested in buying and didn’t know too much. But now I have confidence.”

To Each His Own

To collect by one’s eye and gut means a collection may become as eclectic and multifaceted as the collector.

Buying things one likes is one matter—anyone can let loose with their checkbook—but to form a collection, one with a certain amount of rationality, theme, and order, is quite another. And it takes years for the great churnings of fate to bring the right artwork before the right collector. And where fate falls short, painstaking research makes up the balance.

As the years progress, the assortment of acquired objects takes on a life and spirit of its own.

At that point, the collector must consider: What will this set of things become? How do the parts of the whole relate to each other? What items no longer seem relevant? And should some of them be sold?

The collection itself also begins to make demands: “You don’t have a single work from this artist!” or, “You’ve got examples from everywhere but that region!”

Each successful collector develops solutions to how to build a collection in a way befitting of his or her means and interests.

Some people collect in several different areas, some seemingly having little to do with each other. A prime example would be J. Tomlinson Hill, who collects 20th century and contemporary art, Renaissance bronzes, and Italian primitives. He arranges them in his home in such a way that unexpected comparisons can be made between wildly different artworks.

Others, like Trammell and Margaret Crow, founders of the Crow Collection of Asian Art, acquired striking artifacts as they traveled throughout Asia.

Some specialize in a narrow area—miniature botanical prints, for example—enjoying the thrill of the hunt for their next acquisition, wherever in the world it might be hiding.

Those are hardly the only ways to collect. “Some people acquire a collection, sell it, and start all over again in a completely different area,” said The Frick’s Reist.

One of the most common generalizations made about collectors is that they purchase expensive art to impress others. (And if the objects aren’t expensive, that they are merely hoarders.)

One collector comes to mind to whom neither accusation can be fairly made.

British portraits dealer and author Philip Mould recalled in his 2010 book “The Art Detective” the experience of meeting a man named Earle W. Newton. It was 1992, and Mould had made the trip across the Atlantic at Newton’s request.

Upon arrival, Mould found the Newton home suspiciously free of art and initially wondered if he had been duped by his new acquaintance. Later during the visit, Newton revealed all. Antique British and American portraits, some in poor condition, crowded together in a neighborhood church house.

Despite the paintings’ various stages of disrepair and unconfirmed provenance, their owner felt certain they were of great importance and destined to contribute to a deeper understanding of the cultural ties between Britain and America.

Newton was so firm in his belief that he pinched and saved on necessities to support his collecting, sometimes disappearing without explanation for months at a time to the deep embarrassment of his family.

It turned out that for all his madness, Newton was onto something. With the help of Mould and a team of restorers, today the Newton collection resides at the Savannah College of Art and Design museum. Newton was made an officer of the Order of the British Empire in 2003 for his life’s work.

The most prominent museums in New York City couldn’t have been possible without the contributions of collectors big and small. The Morgan Library and Museum started out as the private collection of Pierpont Morgan. Henry Clay Frick’s private home has been converted into one of New York’s most intimate museums. And John D. Rockefeller Jr. almost singlehandedly created the Cloisters. His family’s collections have also boosted the offerings at The Metropolitan Museum of Art and other institutions.

Collectors as driven as Newton are rare. Most collectors start out for personal reasons, and only begin considering lofty goals like their civic duty to the public or cultural heritage when their collections mature. Most start thinking about their legacy later in middle age, Reist said.

Both Wong and Gallis are considering the issues of their estates.

When their mentor passed away in 2003, a protracted legal battle ensued between two of his children, each accusing the other for stealing art from their father and each vying for a larger portion of the collection.

Gallis wished that a scholarly publication had been written about C.C. Wang’s collection, which consisted of many culturally important works Wang felt needed to be preserved. Other than the portion that Wang himself gave to the Metropolitan Museum, the fate of the collection is not known. The court finally dropped the siblings’ case in 2012.

Gallis wants his collection to avoid a similar fate.

“I want to pass it on in a way that the knowledge is not lost,” he said.

As for Wong, she hopes that her beloved artworks will one day return to their native country, China.

Do you collect? Tell Epoch Times what you collect and why. It can be anything from MetroCards to masterpieces. We may feature you on our website. Email us at  nyc_arts@epochtimes.com