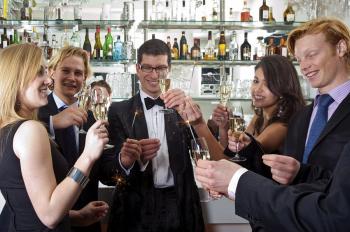 Would you put toast in your wine? Are you scaring away the evil by clinking your glasses? (Bigstockphoto )
Food

BY Lisa Sim TIMEDecember 29, 2009 PRINT
Communal drinking is not something new. Sharing a common beverage in a group has been popular since man has walked the earth. Many villages around the world have shared a communal cup of fermented drinks.

From Africa to Peru, this is not something new. In Greece, wine was shared not only for communal joy but also to make sure your friend was not going to poison you. Sad, yes indeed, but in political arenas this took place quite often. Even royalty poisoned each other to gain position or rank.

Later, Germans and other European countries started floating toast on the top of their wine to remove a bitter taste from the wine. They learned this from the Romans. Probably the charcoal would filter out some of the bad taste in ancient wine. The toast dissolved into the wine or alcohol and the two became one.

Who toasted whom first? Some are sure it was the Germans that started the tradition. Others claim that it is the English and that the first toast is on record in England in 450.

Banishing the devil by clinking glasses and tinkling bells was symbolic back then, and the person who finished his or her wine first received the toast on the bottom of the container.

On this New Year’s Eve, don’t forget your toast and banish any devils waiting in the eves by clinking your glasses!