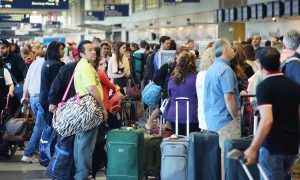 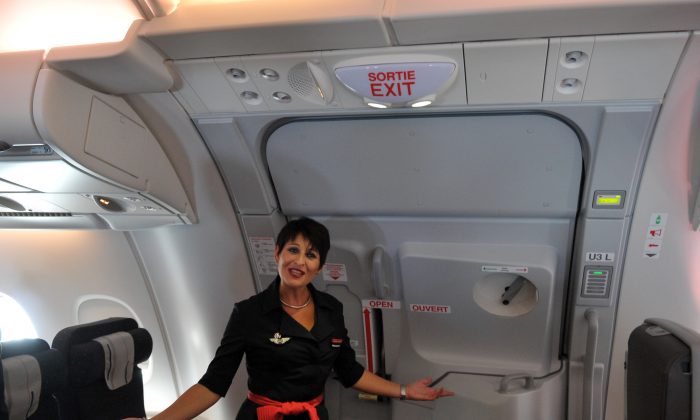 If you’re a frequent flier, or a curious flier, you’ve probably pondered some if not all of these questions:

Why are there ashtrays on nonsmoking flights? Why do we have to open the window shades and put our seats upright during takeoff and landing? What does “cross-check” mean? Why do flight attendants insist we turn off the Wi-Fi on our devices when so many people forget and nothing bad ever happens?

1. Ashtrays in the Lavatory

If you think about it, airplanes have more no-smoking signs than passengers (they’re above every seat, on every safety card in your seat pocket, and so on). So why in the world is there an ashtray on every lavatory door, usually just below one or two no-smoking signs? If you’ve never noticed, check it out next time you fly—it’s true.

The Reason: The Federal Aviation Administration (FAA) in the United States, and some counterparts elsewhere, require it. Regulators know that some die-hard nicotine addicts are going to smoke anyway and if they do, there needs to be a safe way to butt out.

In fact, ashtrays are on the minimum equipment list (MEL), meaning that an aircraft could get grounded if it doesn’t have a functioning one on board—and it’s happened more than once.

In 2011, Canadian carrier Jazz Air was forced to fly empty from Fredericton to its home base in Halifax (271 miles away) and back, just to get a new ashtray installed before it was allowed to fly its scheduled route from Fredericton to Toronto, causing a nine-hour delay. A British Airways flight trying to leave Mexico City in 2009 had the same problem, but crews were able to find a replacement ashtray and the incident only caused a 25-minute delay.

2. Opening the Window Shades for Takeoff and Landing

While this may feel like a vicious plot to rob you of the last moments of needed sleep, that’s not actually the reason flight attendants ask you to open the window shades for takeoff and landing.

The Reason: During a flight’s most critical times—like takeoff and landing—it’s good to have maximum eyes looking out the window in case a wing suddenly catches fire or a wheel falls off. Since only about 10 percent of accidents happen while at cruising altitude, it’s OK to be less vigilant during the rest of the flight.

Another reason for the window shade rule is that in case of an “unscheduled landing,” in other words a crash, it helps if rescue crews can see inside the aircraft and passengers can see out.

Finally, if there is need for evacuation, it’s beneficial if passengers’ eyes are already adjusted to the true light conditions outside.

Not all airlines have identical safety protocols, though, which is why you’ll hear this announcement on some flights but not others.

3. Putting Your Seat Back in the Upright Position for Takeoff and Landing

One explanation could be that it helps prepare the cabin for the next flight, similar to collecting the garbage. While it’s probably helpful, that’s not the true purpose.

The Reason: It’s because, according to the FAA, it takes 15 to 45 seconds longer to evacuate a plane with seats reclined. Those are crucial seconds in the event of an accident.

The other reason is that when a seat is upright, it’s in a locked position, and thus will do a better job of bracing your body in case of impact.

Related Coverage
How to Book a Private Jet at Economy Prices

If you’ve flown, you’ve heard it. Just before takeoff and right after landing the pilot makes the announcement: “Flight attendants, prepare for cross-check.” So what does that mean? It’s basically telling the flight attendants to make sure they’ve prepped the plane doors for takeoff or landing.

The Reason: Before flights, attendants “arm” the doors, meaning they set it up so the inflatable slides automatically deploy in case of emergency. For landing, they “disarm” the doors so the slides won’t deploy at the gate.

After forcing us for years to turn off our cellphones and Sony Walkmans (back in the day) for takeoff and landing, the world’s aviation authorities have decided it’s not dangerous after all to use our devices gate-to-gate. But we still have to turn the setting to airplane mode.

If you fly, you’ve probably forgotten to turn off your cellphone once or twice (to be generous), and nothing horrible has ever happened, so why the fuss?

The Reason: Long story short, there’s anecdotal evidence that transmitting devices (cellphones, Wi-Fi iPads, and so on) have interfered with navigation equipment and caused problems. But the truth is, there are just far too many devices and far too many planes out there to test every combination so it’s easiest to set one simple, strict rule.