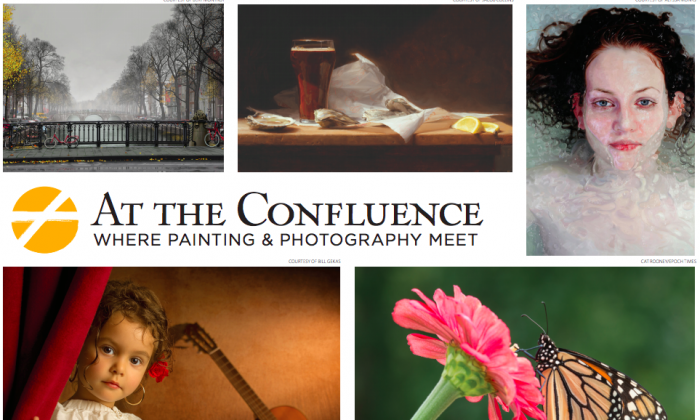 If you’re brave enough to wade into any artists’ online forum, you’re likely to find yourself in a rip tide of a discussion whose logic whips you about so quickly that it makes your prefrontal cortex go numb.

It begins simply enough: Someone raises a question about the differences between viewing a photo and viewing a painting, which inspires a variety of musings from personal experience. One artist prefers using photographs as reference, another thinks photography has its place but is limited in what it can do … Soon someone gets a bit tongue-tied trying to define abstract ideas like “reality,” “aesthetic,” or “perception”; and then someone introduces a slippery art history term like “impressionism,” “photorealism,” or “hyper-realism.”

Why do photography and digital images hold so much power over artists, and fuel such heated debates?

If the phrase “camera obscura” appears, describing an early optical device that some Old Masters are rumored to have used, hold your breath for defensive statements and possible name-calling. Online discussion boards may be the closest thing to a blood sport among today’s representational artists.

Why do photography and digital images hold so much power over artists, and fuel such heated debates? Part of the reason is that this technology’s preponderance drives straight at the core of image-making, the primary act of being a visual artist.

Technology has a way of seeping into people’s blood gradually, surreptitiously, and without detection. It changes the way we perceive, cognate, and communicate. We now instant message people sitting two feet away. It’s harder to trust our own instincts without validation from the Internet’s faceless multitudes. The colors of the sky and the behavior of birds mean nothing except to farmers and sailors; most just pull up a weather app.

When we gain access to one sort of reality, we lose touch with another. The same goes for art.

Those of us sitting here in the 21st century have only known a reality in which photography is ubiquitous. We remember our own childhood through snapshots, advertisements ooze with glamour shots, and a camera is tucked into nearly everyone’s pocket. Maybe all of us have unwittingly lost the skills of seeing without technology.

This environment has profound implications, not only for professional artists but also for anyone with an optic nerve. Children learn to interpret what they see by way of the tools they’re given. The world according to Nikon looks quite different than the world according to a graphite pencil. And in today’s schools, there’s a greater chance that students master shutter speed than the nuances of hue and value.

We remember our own childhood through snapshots, advertisements ooze with glamour shots, and a camera is tucked into nearly everyone’s pocket.

Which is able to better record the visible world, a camera or an artist’s eye and hand? Is a painting that was created using photography inherently less of a painting? Is a painting more impressive if it looks as real as a photo? How real is a photo, really? And if the resultant image is visually pleasing, does it even matter how it was made? Each of these questions is fraught with contention.

In this 9-part series, which we’ve named “At the Confluence,” we will speak to various people working in the fine arts: a founder of a traditional atelier; an educator in realist technique; painters who use photo references, painters who don’t; and artists whose medium is rooted in photography but who are influenced by realist painting.

Everyone is a blind man before this elephant, but it’s a conversation worth having. Artists and art critics have already gotten blue in the face among themselves. It is time for others to get clued in and have a say as well.