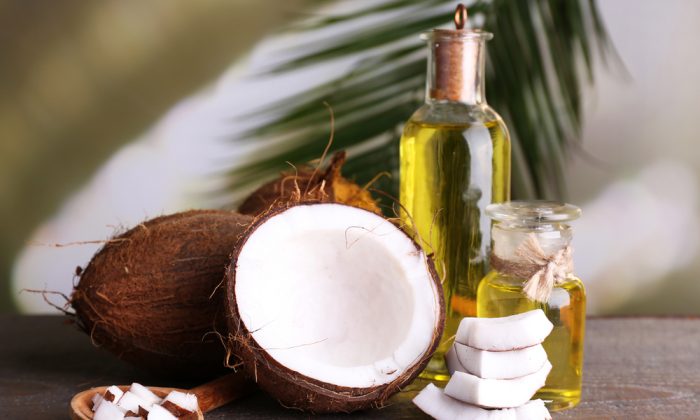 Why I Stopped Using Coconut Oil on My Face

Coconut oil hit the scene like a tropical storm with people snapping it up for use in smoothies and skincare alike. But not so fast! This fruit is not the panacea for skin that many people purport it to be. In fact, it’s further proof that there are few ingredients and products that are universally beneficial—no matter what the latest fad insists.

Believe me, I love coconut oil and use it often. For baking, it easily replaces margarine in most chocolate cake recipes with delectable results. And on sweet potatoes? Nom nom! My hair drinks it in as a leave-in treatment like a dog laps up water on a summer’s day. Spreading it over my body after a shower, I’m transported to a getaway worthy of Organic Spa Magazine, and my torso gleams. But my face? That’s another story.

Many people erroneously believe that when they switch to more natural and organic products, their skin will automatically clear up. Unfortunately, that is not the case. Trial and error plus a bit of research never hurt before embarking on a new regimen. When I use coconut oil on my face—rather than improve my complexion—it causes me to break out in blemishes. Evidently, I’m not the only one, as I recently started noticing more and more people saying that they can’t use it either. Hmm … [Puts mad scientist cap on.]

So I wanted to understand why. What is it about coconut oil that does not work for all skin types?

The answer, it turns out, does go skin deep.

It’s a Warm and Dry Oil

“Coconut oil is a warm and dry oil, so if a person is having issues with a ‘hot’ condition or is prone to these, coconut oil can make it worse. Acne and other red, inflammatory imbalances tend to be hot in nature. Likewise, if somebody tends to be on the dry side, anything that makes the skin more dry will throw it off balance and potentially make their skin produce more oil, leading to breakouts.”

This explanation clarifies why some skin types tolerate coconut oil better than others. However, it’s still not totally clear how coconut oil functions on the skin leading to flare ups.

It is Highly Comedogenic

Kristina Holey, holistic skin specialist, explains that the molecular structure of coconut oil is simply too large for the skin to absorb. So instead of benefiting the skin, it sits on top of the skin and can actually clog pores.

“Also, the dermis, right below the epidermis, is composed of many essential fatty acids (EFA) which help provide physical and nutritional support to the epidermis. Basically, by topically applying EFA 3 & 6 we can introduce important nutrients for the epidermal layer. As coconut oil does not contain those EFAs there are many other oils which are much more effective at keeping the skin healthy and providing the nourishment it needs.”

According to nutritional therapy practitioner Carla Hernandez of Wise Roots Nutrition, coconut oil is one of the highest scoring comedogenic ingredients on the comedogenicity scale—a list that rates a substance’s ability to clog pores. EEK! I don’t want that anywhere near my skin.

For a helpful discussion about the right oils for different skin needs, I found this post on Minimalist Beauty to be extremely informative and well researched. It is well worth the read! Blogger Dawn Michelle offers the profile of 28 different oils and their linoleic/oleic ratio. She explains that acne-prone individuals do better with oils that are higher in linoleic acid. Coconut oil, however, is higher in oleic acid and is listed among the more balanced oils—along with jojoba, tamanu, argan, and flaxseed oils. FYI, she really loves organic, cold-pressed pumpkin seed oil for her blemish-prone skin. Other oils that are higher in linoleic acid include rosehip seed oil, hemp seed oil, and grapeseed oil, among others.

Obviously, skin types differ. Some people find that coconut oil works great for them. Then it’s a perfectly fine oil to use. But for those of you who don’t, you may also want to steer clear of some hidden coconut ingredients such as caprylic/capric triglycerides. These are found in most creams as an emollient as well as a stabilizer that increases the shelf-life of a product. Why avoid it? It is derived from coconuts or palm oil and used to create a barrier on the skin’s surface, decreasing the amount of moisture lost through the skin, functioning not only to prevent dryness in skin, but also as a skin conditioning agent. If your skin doesn’t take to coconut oil, you’ll want to watch out for its potential pore-clogging activity.

Most ingredients that start with the word “lauro” come from coconuts, as well as a list of potential coconut derivatives in this blog post. While you may not need to avoid all of these—unless you’re highly allergic—it is good to know what may be disrupting your skin in a product so that you can make informed choices. Also of note, many natural emulsifiers are sourced from coconuts. Emulsifiers are added to products to prevent the combination of oil and water from separating. That may be why blemish-prone peeps like myself don’t do as well with most creams and lotions.