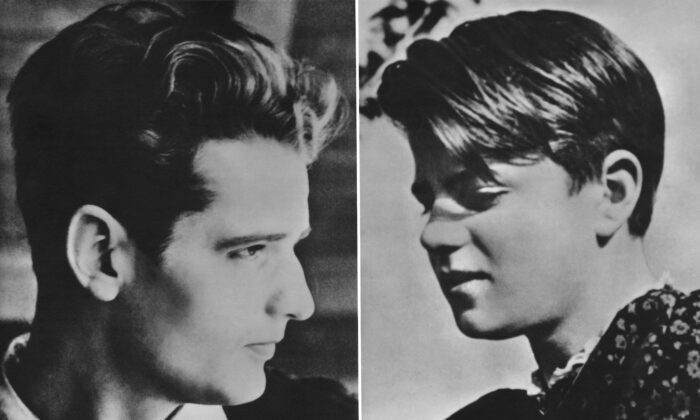 German students Hans Scholl (1918–1943, L) and his sister Sophie (1921–1943), circa 1940. Both were members of the non-violent White Rose resistance group against the Nazis. After their arrest for distributing anti-war leaflets at the University of Munich, they were convicted of high treason and executed by guillotine. (Authenticated News/Archive Photos/Getty Images)
Life & Tradition

During World War II, a group of college students calling themselves “The White Rose” wrote leaflets against Nazism and were executed. Another person of conscience during the war, German industrialist Oskar Schindler changed the fate of 1,200 Jews, whose families now thrive, and they honor him today.

Sadly, communism survived World War II and continued to persecute and impoverish millions of people. At the same time, it moved people to adopt better ways of life in opposition. Aleksandr Solzhenitsyn’s ability for self-criticism led him to trenchant criticism of the Soviet system in “The Gulag Archipelago.” In China, Liu Xiaobo provided intellectual and political leadership to his fellow Chinese working for human rights, and Li Hongzhi offered a traditional spirituality of hope to millions in the Falun Gong movement.

Adherents of Falun Gong are known for their courage, and behind their courage is their conscience. They’ve chosen the hard right rather than the easy wrong when people’s lives depended on them. But mostly they’ve carried out the ordinary activities of daily life like everyone else.

Following your conscience in everyday life is good practice for those moments when a few courageous, well-chosen actions make a great difference. Most people aspire to do the right thing under pressure, but not to live under pressure. Fortunately, we’re not constantly tested. But the downside is that we don’t always become stronger, more prepared to stand up for the right thing.

Following your conscience turns out to be one of the most important spiritual moves for living at peace in a conflicted world. You’re more likely to live your best self every day, be more successful and peaceful, and affect more people than you realize.

Conscience is not consciousness. Waking up makes you conscious but doesn’t arouse your conscience.

There are lots of definitions, but your conscience is essentially your best judgment about how to put your best self into action. It’s one of the most powerful movements in your heart and soul. People often associate conscience with guilt, but following it can bring great peace, spiritual strength, motivation, and success.

Your conscience is a judgment about your actions: whether they’re right or wrong, and, if they’re right, whether they are good, better, or the best you can perform. If you’re like most people, you’re probably doing all right but could do better. That’s your conscience telling you to take your game to the next level.

“Conscience” comes from ancient Greek courtroom language: syn + eidesis, which the Romans translated con + scientia = with + knowledge. It referred to a witness, someone who comes “with knowledge” of another person’s guilt or innocence. So your conscience is the courtroom witness inside you.

Having a constant witness sounds terrible, like an angry critic you can’t get away from. But having a conscience is actually a blessing. It literally means “to know right or wrong within oneself; to know in one’s own mind.”

Having the ability to make good moral judgments on your own enables you to accept accurate criticism and reject false critics. A well-formed conscience gives you the spiritual strength to do the right thing under pressure and turn bad situations into good ones. Conscience can be a kind but firm challenger when you know deep down you’re going astray. It can also be a passionate advocate when you’re doing well and teach you how to live and love better. But you have to pay attention.

Conscience is connected to powerful emotions such as guilt, shame, and poor self-esteem. Emotions are sometimes reliable, sometimes not. Shame is a great example. We can feel ashamed when we’ve done nothing wrong or when we have. We can feel un-ashamed when we really have done something wrong and have become hardened and blind to it. Negative emotions can be an early warning system that something is wrong, but we have to think about them to recognize it.

No one forces you to follow your conscience. You’ve probably already figured out that if someone tries forcing you to do something that makes you uncomfortable, it’s a good time to engage your conscience and figure out why.

You have to choose to follow your conscience. Your conscience will speak up to let you know things. But sometimes other voices speak more loudly. Like a wise counselor, your conscience is often quieter but more patient and insistent. When you choose against your conscience, you disappoint yourself. That’s one of the worst feelings of all.

Following your conscience means avoiding what you know is wrong, doing what you know is right, and striving for the greatest goals in the best way. It doesn’t mean you have to change the world or be amazing, but if that’s your calling, go for it. Using your talents and skills to serve others in professional life, to help friends and others in need, to get and stay married, to raise a family, and make a positive impact on your community are the great goals of ordinary life.

Look at Your Conscience … Looking Back at You

But let’s be honest, sometimes your judgment is off. Your conscience is wrong. That’s not a deal-breaker, especially if you tried … and keep trying. The good news is that you learn.

People learn best by studying a little every day. One of the best ways to know and love yourself is to spend 5 to 10 minutes at the end of each day asking yourself what you did well, what you did poorly, and why. Perhaps describe what you did in a journal and reread it. For the good and the bad, ask, “Why did I do it?” Did it go toward making you the kind of person you hope to be? What should you change and what should you keep the same for tomorrow?

Be honest with yourself, and pay close attention if you did something your conscience was telling you not to do. That might be a weakness and a sign of danger: the relationship that shouldn’t continue, the crutch of lying to gain unfair advantage, cutting corners on work projects, taking friends and family for granted, failing to stand for justice for a neighbor, or neglecting physical fitness and mental health.

Expect to wrestle with your conscience. Sometimes you’ll want to choose against your best judgment. Some questions are hard, and in some situations you’ll be confused about what’s wrong, right, good, better, and best. But if you take a few minutes every evening to look back at your day and listen to your conscience, you’ll become a stronger person and better friend to more people.

If you regularly explain to yourself why you think you did well or poorly, you become more conscious of your moral standards. You might not think of your moral standards very often, and that’s not necessarily bad. But everyone has them and acts on them, and no one needs to tell you that they become very important in difficult or controversial situations.

Some of these moral controversies go on inside us. They arise for different reasons and can be complicated or simple or somewhere in between. But turning your attention to the standards you’ve lived by so far can confirm them, engage them, lead you to better, more humane standards, or even cause a wholesale conversion in your life.

Sometimes we’re our own worst critics. We can denigrate our true accomplishments and at the same time rationalize and overlook our darker motivations. You need a wise outside voice to silence the devilish ones within and recognize the true voice of your own conscience. Good mentors help you look smartly at situations, spot the wrong, and aim for the good, the better, and the best. In the end, you judge, you own it, and you act.

Your conscience has important things to tell you, and if you don’t pay attention, it will be quiet for a while. That’s how people fall into bad, sometimes tragic or fatal habits. But every once in a while, conscience will speak up again, often triggered when situations make you recognize the bad habit. Listen. It’s worth it.

At the end of your day, … week, year, and life, you’ll live at peace in a conflicted world, have had a positive impact on many lives, and leave your community better than you found it.