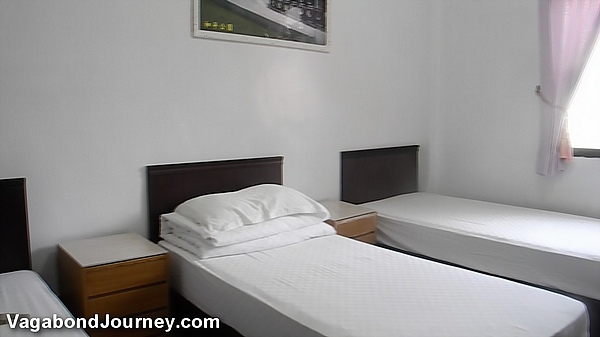 Why Finding the Cheapest Hotel Room Is No Longer Worth It

I can’t say for sure that I had the cheapest room in the city, but it sure seemed like it. The last time I was in Jincheng, the biggest city on Kinmen, I was told that the cheapest hotel was down this narrow alleyway, sort of in the grounds of a temple. Vague directions, sure, but any cheap ass vagabond would of course sniff it out. I found it. It was full. I ended up paying over $30 per night at another hotel.

This time, I not only found the hotel but got a room. $25 per night for a private room with a bathroom and everything else is cheap for Jincheng. Though the place can be said to be little remote — in the no-man’s-land between China and Taiwan — hotels are expensive. I spent hours looking for a room my first time here. They all wanted $40, $50, $60+ per night. It was raining and I didn’t have a tent. I was sunk.

Finding a place to stay is part of the work of travel. I like doing my real work — taking photos, videos, and talking to people — not squandering time dejectedly trudging from guesthouse to guesthouse. I used to spend hours and hours and hours looking to save $5 on a room. Not anymore. The time put into looking in endless hotels just isn’t worth the expense.

A few bucks is worth less to me now than the conversations, friendships, impressions, videos, experiences, etc . . . that I could otherwise be having with the time I put into ever scrounging a cheaper room. Seriously, my ledger books do not go in the black if saving a little money on a room takes an excessive amount of time. An hour of searching to save $5 on a hotel is going to be less of a financial gain than an hour of collecting and publishing content.

So I now just figure out what the “ballpark” figure is for a cheap room somewhere, and the moment I find it, I take it.

Though it’s only in somewhat remote, more word of mouth, places like Kinmen that I still find rooms on foot. The days of wandering around unfamiliar cities looking for a room are pretty much over. I mostly do this shopping online now — like everybody else. It’s faster and, ultimately, more effective. Though I may miss the little, super cheap family hotel every once in a while, the amount of time that it often takes finding these places, again, isn’t worth it financially. I book my first nights online then if I find a cheaper/ better room later if I happen to find one.