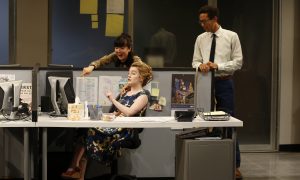 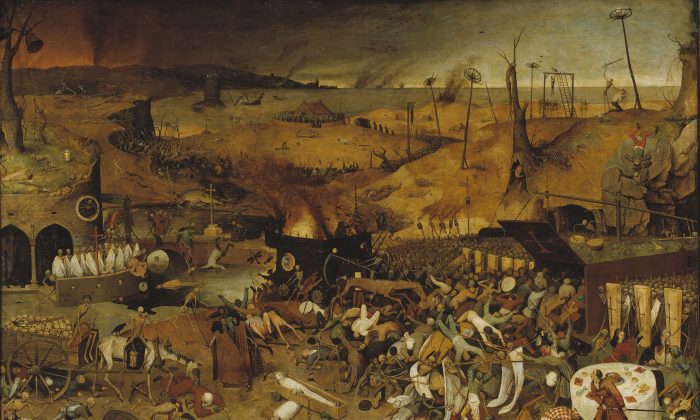 "Triumph of death," by Pieter Brueghel the Elder from 1562. Is it the end of civilization? Or just the end of sensationalistic theater. (Museo del Prado/Public Domain)
Arts & Culture

Why Enough Is Never Enough and Why Sensationalism Is Destroying Theater

Does it take sadistic perversity to get us into theater seats today?

In a long, multifaceted, and sad statement on art, professor Michael J. Lewis of Williams College states that art today is irrelevant because the public has grown indifferent to it. Once something meaningful to chew on, art is now only a commercial venture that entertains. In light of the off-Broadway premiere of “Mercury Fur,” this idea is worth thinking about.

The fine arts attacked everything once valued—the essence of any civilization.

Lewis explains that fine art lost its societal importance over a tortuous hundred years or so—during a process in which the arts whittled away at Western civilization. At first, art righteously attacked the insidious, ugly, stultifying, or simply the absurd in our culture. But eventually, all cultural values of Western civilization, whether good or ill, were bashed. The fine arts attacked everything once valued—the essence of any civilization.

We attend museums today in record numbers, for example, but no longer for cultural edification. Now we go for circus-like experiences to see whatever is original and sensational. He cites The Art of the Motorcycle exhibit in 1998, which critics decried as lacking redeeming value—it traced motorcycle history with 114 vehicles—but which the public streamed to. At the same time, fine art sells for record-breaking prices, yet no one talks about it.

If this is the state of the fine arts, what must it be for the performing arts, which have always, necessarily entertained as well as enlightened? Are they also selling the newest, sensational thrill?

Certainly theater marketing agents think so. New plays, the serious ones, are invariably billed as groundbreaking, innovative, or at the very least, exciting.  The Contemporary American Theatre Festival was recently hailed as “25 years of ‘new’: Theater festival as cutting-edge as ever.”

Lewis uses performance artist Chris Burden to make a point. In 1971, Burden had a friend shoot him in the arm with a rifle in what became a defining moment in the genre called “endurance art.” Recently, Lewis showed a video of the event to one of his classes; it caused no horror, no disgust. It did not cause even a ripple of interest.

To be exciting, new, and cutting edge means to cross the threshold of what is taboo for a civilization.

When Henrik Ibsen’s character Nora first crossed the threshold by leaving her husband and young children at the end of “A Doll’s House,” the audiences of 1879 were horrified.

We got over it. That familial bond once considered sacred has been abandoned.

Taboos can only be truly broken once. After that first time, after the fuss dies down, the subject is no longer taboo.

The same applies to art. When thrills are the premium value in theater, each new play must dare to go further than the last. Once a new taboo is broken, other artists revisit the same theme endlessly (think of grotesque zombies) until it is hollow and thin. A new piece then must further the boundary of what is able to shock us.

When thrills are the premium value in theater, each new play must dare to go further than the last.

Playing now is the off-Broadway production of Philip Ridley’s “Mercury Fur.” The play premiered in London in 2005. At that time Faber & Faber, which already had a working relationship with the playwright, refused to print it.

This fact is highlighted in all the press about the recent New York opening. The implication is that the play offers surefire taboo-breaking shocks, and we shouldn’t  miss it.

I have not seen the play—just reading a review made me queasy. But I did decide to read the play.

“Mercury Fur” is set in New York after a Rwanda-like genocide has left the inhabitants roaming the streets in what we might call post-civilization. Most of the few, young (most in their teens) survivors we meet are addicts of a hallucinogen induced by eating mind-altering butterflies.

Each type of butterfly creates a specific fantasy—so not only are we treated to stories of the machete-mutilating deaths of the genocide, we also are transported by detailed narratives of sadistic and masochistic nightmares.

The teens drug-deal these butterflies. But they also set up and help carry out “parties” in which the rich live out their sadistic fantasies on live victims—a child, in this scenario.

So taboo-breaking shocks aplenty. Plenty of high-tension thrills, too, like are we really going to see a child gutted with a meat hook?

According to the Observer, critics at the time found “Mercury Fur” exploitive and sick. Remember, “Mercury Fur” first came out in London in 2005. Ten years later in New York, the play has somehow, miraculously improved. Rather than cite the critics’ superlatives, I’d rather ask whether the play has really changed in 10 years, whether the New York production is much, much better than the original London premiere; or, instead, whether our cultural milieu has acclimated to the play’s shocks and that what was once intolerable and beyond depraved is now deemed raw and provocative.

Perhaps the latter is true. As Theater Mania points out, we’re already consuming “films like ‘The Hunger Games,’ whose theme is the entertainment value to be found in teenagers hunting down and killing one another.”

This is not to say that “Mercury Fur” is only meaningless entertainment. Ben Brantley writes that the play examines how we “define morality under duress in a world without structure.”

Supervillain to the Rescue?

In fact, Ridley’s world in “Mercury Fur” pretty accurately sums up Professor Lewis’s points. The play is all about the end of art and supremacy of sadistic entertainment. Consider that we enter a world in which art has no meaning at all: The Metropolitan Museum’s pieces have been looted and serve only utilitarian purposes. Cultural landmarks, icons, history have been nearly forgotten because after repeated use, the butterfly drug destroys the memory. These kids are lucky to know their own names let alone what Egypt is.

Not only that, but an addiction to a hallucinogenic, mind-numbing drug accurately reflects our addiction to the next new nightmarish play, movie, or what have you. We need another fix.

The seriousness of whatever Ridley intended to say may be lost if those who embrace his work do so for less than serious reasons. After seeing the 2005 London version of the play, Observer writer Miranda Sawyer chided theater critics for dismissing it. She liked attending the theater but only when the plays felt vital, original, and relevant. Like “Mercury Fur.”

Her take on the play: “I enjoyed it. I was involved from start to finish.”

She addressed her article to the stodgy theater critics, miserably behind the times and not keeping up in recognizing fresh territory for taboo smashing. She titled her piece “Time to smell those roses, boys.”

Unfortunately, when we are shell-shocked, we cannot think—which is exactly the effect “Mercury Fur” currently has on its viewers. According to Brantley, it leaves one “moved, muddled, and gasping for air.” A professional critic may be able to draw meaning from it, but for the rest of us, likely not.

Is art paving the way for us to accept sadistic depravity?

Torturing and killing a kid for kicks? Is art paving the way for us to accept this depravity, like the survivors in “Mercury Fur” have done? If this theme continues—say, with “Hunger Games 2” made with preteens—we may simply get over thinking it is disgusting.

Can the arts continually cut new edges? Hardly. A culture only has a limited number of taboo subjects. Eventually, there are no boundaries left to cross, no idols left to smash. Which means art that hedges its bet on shocks and thrills is necessarily dooming itself.

All art must draw from the civilization in which it emerges, Lewis writes. No civilization, no art.

When children can be cut up for entertainment, the future has been killed in a pretty literal way, and we have reached the end of the world. The last point “Mercury Fur” makes.

Whether the end of the world is close at hand is hard to say. But theater based on sensationalism has few, if any, taboos left to smash.