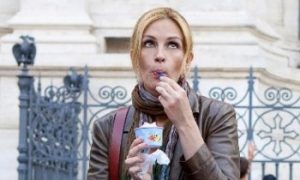 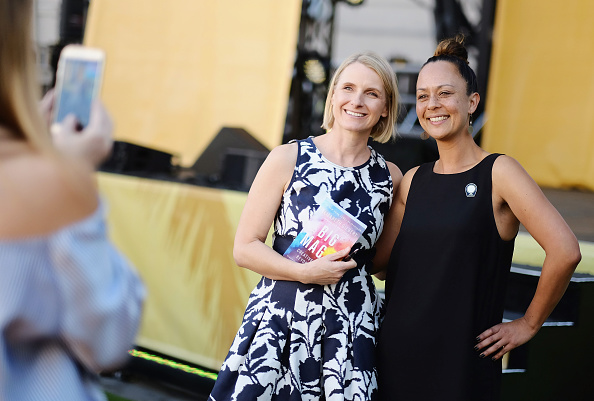 Author Elizabeth Gilberet (L) takes a photo with a guest at the meet and greet at the Oasis during Airbnb Open LA in Los Angeles, Calif., on Nov. 18, 2016. (Mike Windle/Getty Images for Airbnb)
People

As the year begins, many will embark on a self-improvement project. Elizabeth Gilbert’s mega-selling memoir “Eat Pray Love” has inspired millions toward a journey of self-discovery.

Many who have read the book see the author as wise. Gilbert made the Time Magazine list of 100 most influential people in the world, and she was named to Oprah’s SuperSoul 100 list of visionaries and influential leaders.

In “Eat Pray Love,” Gilbert shares what she has learned about happiness:

“Happiness is the consequence of personal effort. You fight for it, strive for it, insist upon it, and sometimes even travel around the world looking for it. You have to participate relentlessly in the manifestations of your own blessings. And once you have achieved a state of happiness, you must make a mighty effort to keep swimming upward into that happiness forever, to stay afloat on top of it.”

Gilbert’s idea of “fighting” and “striving” for happiness is popular. Over 1,600 fans of “Eat Pray Love” quote this passage approvingly at GoodReads.com, the social cataloging website for books. The quote appears in an astonishing 12 million Google searches. Gilbert’s ideas are popular, but many popular ideas are wrong.

Eli Finkel is a psychology professor at Northwestern University. In his book “The All or Nothing Marriage,” Finkel explains how Gilbert taps into our “cultural zeitgeist—the contemporary American hunger for a life that is true to the self rather than beholden to rules and restrictions.”

Finkel points out that at the beginning of “Eat Pray Love,” Gilbert is “married to a loving, decent” man and “knows it,” but “settling for love and decency doesn’t feel like an option for [her].”

In “Eat Pray Love,” Gilbert claims to find happiness and her true self. She falls in love with José Nunes (called Felipe in the book) a Brazilian-Australian importer. In her follow-up book to “Eat Pray Love,” “Committed,” Gilbert marries Nunes; she presumably lives happily ever after. Not so fast. In 2016, she left Nunes for Rayya Elias.

As Finkel points out, “This is the second time Gilbert has divorced an impressive and appealing partner who generally treated their relationship with respect and dignity.” Finkel adds:

“Fairy tales and romantic comedies often depict getting married at the end of the story—the beginning of the happily-ever after. From the perspective of a relationship scientist, such stories are more farce than romance. Building a happy marriage requires that spouses successfully navigate a dense thicket of challenges and opportunities, frequently without a good map of the route ahead.”

Finkel is rightly concerned about the mindset we bring to our marriages. He cautions, “Just as we have increasingly looked to our marriage to help us fulfill higher-level needs, we have decreasingly invested the time and energy required for the marriage to meet these expectations.”

In a 2015 New York Times essay “Confessions of a Seduction Addict,” Gilbert confesses that in her youth she “careened from one intimate [non-monogamous] entanglement to the next—dozens of them—without so much as a day off between romances.”

“Sex was just the gateway drug,” she writes. Gilbert was after “seduction”:

“Seduction is the art of coercing somebody to desire you, of orchestrating somebody else’s longings to suit your own hungry agenda. Seduction was never a casual sport for me; it was more like a heist, adrenalizing and urgent. I would plan the heist for months, scouting out the target, looking for unguarded entries. Then I would break into his deepest vault, steal all his emotional currency and spend it on myself.”

“Steal … emotional currency and spend it on myself?” What can be more vicious?

Gilbert claims to be past such foolishness. But notice, her mindset seems to be unchanged. She’s sleeping with fewer people, but she is still seeking happiness through external means. Like all of us, with such a mindset we become emotional cannibals, trying to steal from others what we think we don’t have inside.

Rather than rely on Gilbert’s facile but flawed narrative as a path for self-discovery and happiness why not study the real masters?

Examine the purpose of your life, psychiatrist Viktor Frankl would recommend. Life demands of us “right action and right conduct,” writes Frankl in one of the most profound books of the 20th century, “Man’s Search for Meaning.” Drawing on his experiences as a prisoner in concentration camps, Frankl observes, “It did not really matter what we expected from life, but rather what life expected from us.”

In a book filled with wisdom, perhaps the most famous passage from “Man’s Search for Meaning” is a prescription for Gilbert and for all of us:

“Don’t aim at success—the more you aim at it and make it a target, the more you are going to miss it. For success, like happiness, cannot be pursued; it must ensue, and it only does so as the unintended side-effect of one’s dedication to a cause greater than oneself or as the by-product of one’s surrender to a person other than oneself. Happiness must happen, and the same holds for success: you have to let it happen by not caring about it. I want you to listen to what your conscience commands you to do and go on to carry it out to the best of your knowledge. Then you will live to see that in the long run—in the long run, I say!—success will follow you precisely because you had forgotten to think of it.”

Happiness and success will “follow” us when we live by “right action and conduct.” Stop seeking happiness. Live by a higher purpose. Frankl’s advice is a real prescription for a happier life and a better world.

This post “Why Elizabeth Gilbert’s Ideas about Happiness in Eat Pray Love are Wrong”  was originally published on Intellectual Takeout by Barry Brownstein. He is professor emeritus of economics and leadership at the University of Baltimore. He is the author of “The Inner-Work of Leadership.”