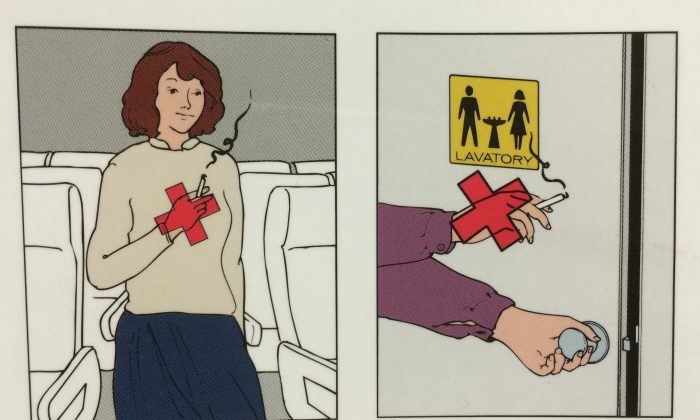 Why Do Airplanes Still Have Ashtrays?

If you think about it, airplanes have more no-smoking signs than passengers—they’re above every seat, on every safety card in in each seat pocket, and so on. So why in the world is there still an ashtray on every lavatory door, usually just below one or two more no-smoking signs? (If you’ve never noticed, check it out next time you fly—it’s true.)

One explanation might be, that the planes are old, from the days when you could still light up on flights. But that’s not the case. You’ll find the same set up even on brand new planes.

So what’s the real reason? The Federal Aviation Administration (FAA) in the United States, and many counterparts elsewhere, require it. Regulators know that some die-hard nicotine addicts are going to smoke anyway and if they do, there needs to be a safe way to butt out.

According to the Code of Federal Regulations for airworthiness:

And accidents have happened. A lavatory fire on a Varig flight from Rio de Janeiro to Paris in 1973 caused the plane to crash, killing 123 people. It’s suspected that a cigarette started the fire.

In fact, the danger is taken so seriously, that ashtrays are on the minimum equipment list (MEL), meaning that an aircraft can be grounded if it doesn’t have a functioning one onboard—and planes have been grounded more than once.

In 2011, Canadian carrier Jazz Air was forced to fly empty from Fredericton to its home base in Halifax (271 miles away) and back, just to get a new ashtray installed before it was allowed to fly its scheduled route from Fredericton to Toronto, causing a nine-hour delay.

A British Airways flight trying to leave Mexico City in 2009 had the same problem, but crews were able to find a replacement ashtray and the incident only caused a 25-minute delay.