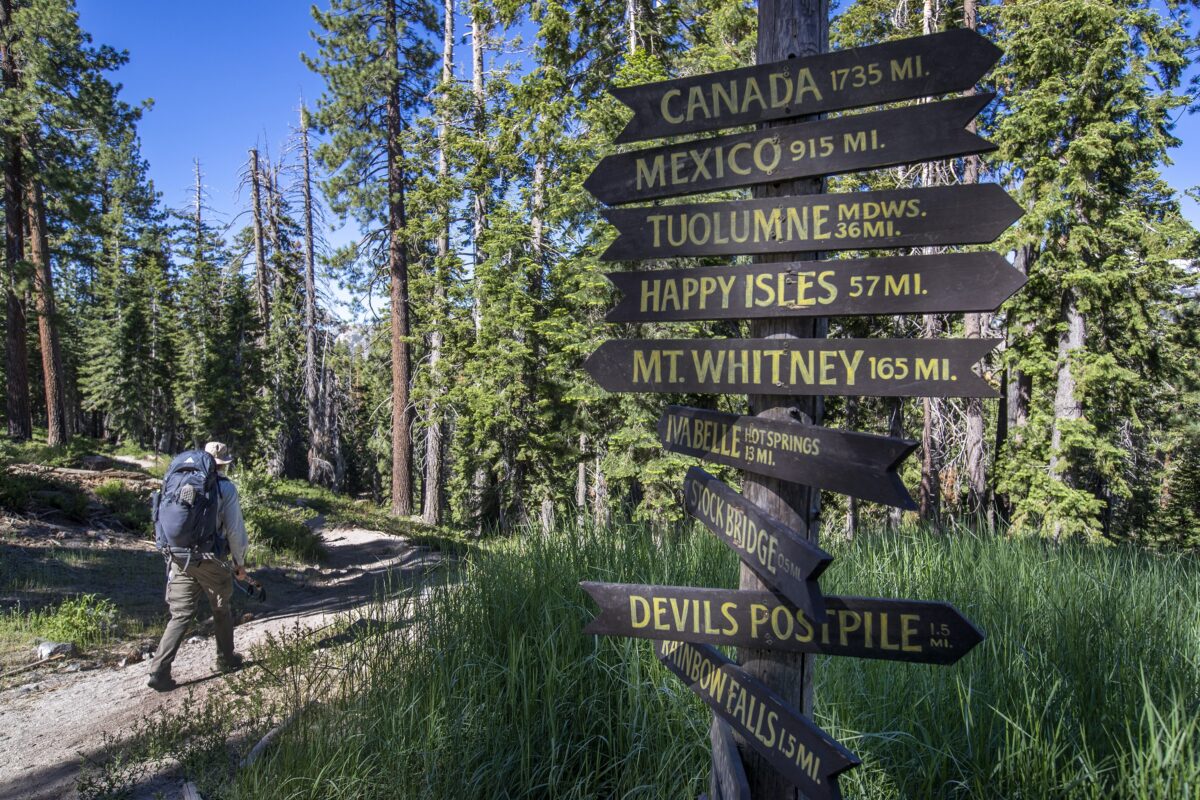 Why Are So Many People Hiking This Rustic California Valley in Mammoth’s Shadow?

Hikers dribble in to this Sierra crossroads from dawn to dusk, all sizes, ages and conditions.

Some look fresh and bouncy as a soap commercial, ready to explore Rainbow Falls, the eerie formations of Devils Postpile National Monument and other highlights of the Reds Meadow Valley.

Others show up smelling like 900 miles of nasty trail.

As Tanner spoke, a bearded, weathered, wiry backpacker straggled in from the woods and paused between the Red’s Meadow Resort’s Mule House Cafe and its general store, next to a red bucket that serves as a sort of Little Free Library for backpackers’ gear.

That bucket’s ever-evolving inventory (socks, propane canisters, paper maps, freeze-dried food, Body Glide skin balm … ) is a good clue to what these hikers are up to and why so many pass through this rugged valley a few miles west of Mammoth Mountain.

But the easiest clue would be the memoir “Wild,” by Cheryl Strayed, which turns 10 this year. In that volume, which became a 2014 movie starring Reese Witherspoon, Strayed describes her struggle to hike the 2,650-mile Pacific Crest Trail, which passes through this valley.

Though Strayed didn’t hike this valley—the High Sierra was buried deep in snow in the year she described—she covered about 1,100 miles of California and Oregon. Her story of grit and introspection helped set off a virtual stampede of through-hiking backpackers through California’s high country.

A decade later, despite pandemic, drought and the menace of the Washburn fire in nearby Yosemite, the stampede continues. Pacific Crest Trail Association spokesman Scott Wilkinson said he expects this year’s tally of long-distance backpacker permits to approach the limit of 8,000 set by federal and state authorities.

For the Reds Meadow Valley this summer, this means a near-perfect storm of blood, sweat, tears, cheeseburgers, horses, waterfalls, and weird rocks.

Indeed, for any California traveler interested in Sierra wilderness or hiker psychology, it’s hard to imagine a more fruitful summer stop than here, about 7,500 feet above sea level, 30 to 60 minutes by shuttle bus from the chair lifts and commotion of Mammoth Mountain.

The valley’s center of human activity is the rambling compound of Red’s Meadow Resort, which includes the store, the cafe, a scattering of cabins, a pair of motel rooms and a pack operation with 60 horses and mules.

Run by Bobby and Claudia Tanner and their 13-year-old son, Bo, it operates roughly June through September (depending on weather), stands at the dead end of the valley’s only paved road and serves as a key resupply point for backpackers threading their way through some of California’s most dramatic mountains.

Every summer, that includes hundreds of hikers on the 210-mile John Muir Trail between Yosemite Valley and Mount Whitney. They usually go north to south and the parade continues all summer.

Jeff Robertson, 44, of Encinitas, whom I met outside the general store, was one of those hikers. Just a few days before, he said, he’d been struggling across 11,056-foot Donohue Pass, his hands “so numb that I couldn’t open up my bear canister,” which held all of his food.

Yet the JMT people are not the most ambitious hikers here. That distinction belongs to those navigating the Pacific Crest Trail on its path between the California-Mexico border and the Washington-Canada border.

PCT hikers usually begin in spring, moving south to north, covering 15 to 20 miles a day in conditions that defy prediction. By late July, some are already nearing the Oregon border. But if trends from past years hold true, only about one in seven PCT hikers will complete the journey.

The good news for those hikers this year was that they had less early-summer snow to slog through than usual. But they had to plan around the closure of Yosemite National Park’s Tuolumne Meadows campgrounds (under renovation until at least 2023).

Whatever the year, if you’re a PCT through-hiker and you’ve reached this valley, you’ve already covered 905 miles. You are ready for a shower ($6 for six minutes, plus $2 for soap and towel) and a burger ($13.50-$18.25) from the Mule House Cafe. And when you order that burger, odds are that you’ll give your trail name.

“Order for Amazon!” I heard a cafe worker holler the day I arrived. And then: “I have an order for Bandit!”

Rule of thumb: The longer you’ve been on the trail, the more you’ll love the cafe’s burgers and shakes.

“This is an important place, for sure,” said hiker Josh Murphy, a PCT hiker (trail name: Long Story) from Pennsylvania.

Still, there’s another element beyond the JMT and PCT people in the Red’s Meadow mix: the day-hikers from Mammoth, who come by the hundreds daily, especially on weekends. They arrive and depart by 45-minute shuttle bus ride because most private cars are forbidden on the road in.

This would be my category. It’s also the easiest way for most people to see the valley.

You arrive by shuttle bus ($15 per adult) at the Devils Postpile trailhead, make your way to the rocks, marvel at the eerie symmetry of the hexagonal basalt columns, then go on to admire Rainbow Falls from above and below.

Along the way, you gaze toward the walls of granite on the west side of the valley and see a series of jagged peaks known as the Minarets. You’ll see and hear the Middle Fork of the San Joaquin River as it meanders the valley floor.

Then you wind up your roughly four-mile, two- to three-hour hiking route at the Red’s Meadow Resort, which is a more rustic spot than the word “resort” suggests. Its most gleaming amenity might be the fire-engine-red 1968 GMC truck in the parking lot.

“It’s a little backwoods kind of place,” said Tanner, who owns the buildings but not the national forest land beneath them. “Mammoth is getting more and more upscale, and yet we’re trying to keep this as close to a wilderness experience as possible.”

The mandatory shuttle-bus system keeps Reds Meadow Road mostly free of private cars. But you can drive it in summer if you’re staying overnight at Red’s Meadow Resort or in one of the valley’s seven Inyo National Forest campgrounds (where many through-hikers sleep).

If you want to see the valley but would rather ride than hike, the Red’s Meadow pack station is ready for you: Guides offer a two-hour ride to Rainbow Falls ($90)—which I greatly enjoyed, despite the dusty trail—or a four-hour ride ($130) to Minaret Falls or the Red Cones volcanic formation.

In just about any Red’s Meadow itinerary, the parade of hiker humanity will play a central role. Every summer, about 2,000 JMT and PCT hikers mail supplies ahead to this address, paying the Tanners $40 each to collect the packages at the Mammoth Lakes post office and hold them in a room next to the general store.

Some backpackers, eager for a respite from their tents, will also hand over $250 for a cabin, $140 for a motel room or $70 for a “hiker cabin” without plumbing. (Most of the lodgings are already booked for this summer.)

By the time they reach Red’s Meadow, the PCT hikers are typically carrying lighter packs and less body fat than JMT people. But the distinction is more than that.

The PCT hikers “look a little bit different,” JMT hiker Kevin Kinne of Massachusetts said. “It’s like you’ve turned back into a little bit of a wild creature.”

Sitting on a picnic table near the red bucket, mentally categorizing hikers, I felt like a birder sorting out species. After speaking more with Tanner, I also began to see Red’s Meadow as a measure of how Californians’ relationship with the Sierra keeps changing.

Back when Tanner’s parents bought the Red’s Meadow Resort in the winter of 1959-60 (when he was a newborn), the valley attracted legions of church groups, scout troops, Sierra Club chapters and families, most from Southern California, many of whom signed on for pack trips by horse and mule so that they could camp and fish at nearby mountain lakes.

By the 1990s, as summer vacations shortened, family trips shrunk and the popularity of fishing faded, that business had begun to shrivel. The Rainbow fire of 1992, which scorched thousands of forest acres and narrowly missed the resort, didn’t help.

Enter the long-distance hikers, spurred by completion of the PCT in 1993, then the “Wild” book in 2012 and movie in 2014. Permits quadrupled between 2013 and 2019. Apart from government-mandated pandemic closures in 2020 and 2021, Tanner said, he has seen no sign of a slowdown in hiker traffic.

Around the bucket, among the resort’s picnic tables and stumps these days, you might meet a mother and son from Dana Point taking on the JMT to celebrate his college graduation.

You might come across a hard-core hiking family like Josh and Cassie Sutton of Virginia and their son Harvey, age 6, who together covered the entire Appalachian Trail last year.

Or you might fall into conversation with someone new to California like Kinne, who told me that every day in the Sierra seems more beautiful and challenging than the one before. He hadn’t seen Rainbow Falls, however, because it was one mile off his route.

Make a detour? No, he said. No energy to spare.

Meanwhile, the Red’s Meadow Pack Station—once the heart of the operation—is down to 60 animals, “a sort of afterthought,” Tanner said.

Tanner does worry that for some through-hikers, “It’s not really about wilderness. It’s about hiking from Point A to Point B.” But he’s not complaining.

In fact, Tanner said, he has an answer ready for the next time anyone mentions the scent of his backpackers.

Getting there: The Reds Meadow Valley, about 315 miles north of Los Angeles City Hall, is a 10-mile drive from Mammoth Mountain via State Route 203 and the Minaret Vista Entrance Station. The only road in the valley, Reds Meadow Road, closes in winter.

Because most private vehicles are forbidden between 7 a.m. and 7 p.m., most visitors arrive from Mammoth on the Reds Meadow-Devils Postpile Shuttle Bus, which runs daily in summer through Sept. 11. The ride takes 30 to 60 minutes. Day passes are priced at $15 per adult, $7 per child ages 3 to 15; tickets on sale at the Mammoth Mountain Adventure Center, 1001 Minaret Road, No. 2100, Mammoth Lakes.

Where to stay: If you’re camping at one of the several Inyo National Forest Service campgrounds in the valley or spending the night in a cabin or motel room at Red’s Meadow Resort, you are allowed to drive into the valley ($10 amenity fee due at the Minaret Vista Entrance Station). The Red’s cabin I saw was pleasant; the motel room, very basic.