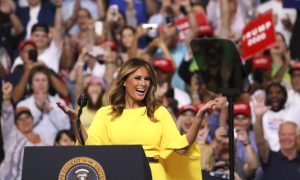 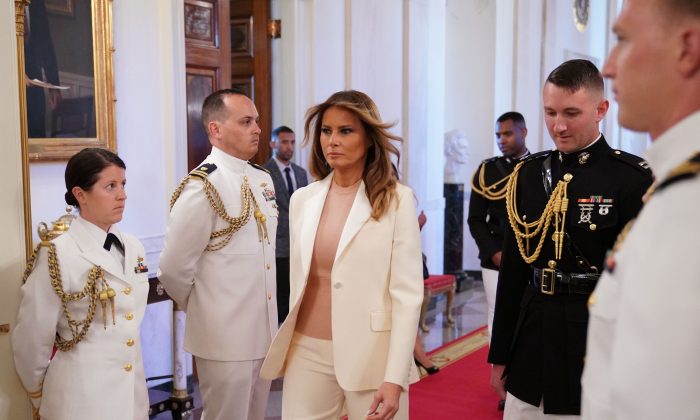 New pictures taken by an Associated Press photographer showed how first lady Melania Trump has upgraded the White House ahead of a visit from the prime minister of Australia and his family for the second official state dinner.

AP noted that there is the new fabric in the Red Room, new draperies in the Green Room, and newly restored furniture in the Blue Room.

In the Red Room, the wall fabric was “so faded it was almost pink,” said Stewart McLaurin, president of the White House Historical Association, AP reported.

“Those rooms should always look their very best and it was just very faded and really, really needed to be done,” McLaurin said. His organization was founded by former first lady Jackie Kennedy in 1961.

“The White House does get a lot of wear and tear,” he added, the news agency reported. The White House gets hundreds of thousands of tourists and visitors, including state dignitaries, per year.

All first ladies have to partake in caretaking, meaning that she has to meet with the chief usher, the head curator, and other staff at the White House how to improve the premises.

“Our family is grateful to live in this true symbol of our nation’s history, but we are even more honored to play a part in restoring and enhancing our country’s sacred landmark,” Melania Trump said in May.

The report noted that in 2017, the White House also saw upgrades to the West Wing lobby and work done in the executive mansion.

White House aides at the time said the historic building was in dire need of repairs.

“There was an emphasis on bringing back the history to this building and the elegance,” deputy press secretary Lindsay Walters said in 2017, according to the news outlet.

Australian Prime Minister Scott Morrison stated he looks forward to meeting President Trump and members of the administration “to discuss how we can further strengthen our alliance and already close partnership.”

“There is no deeper friendship than that which exists between Australia and the United States,” Morrison said in a statement. “We see the world through the same eyes, with shared values and a deep commitment to promoting peace, liberty and prosperity,” he added.

The upcoming state dinner on Friday, Sept. 20 is only the second of Trump’s time in the White House.

French President Emmanuel Macron was the guest of honor in the first state dinner in 2018.