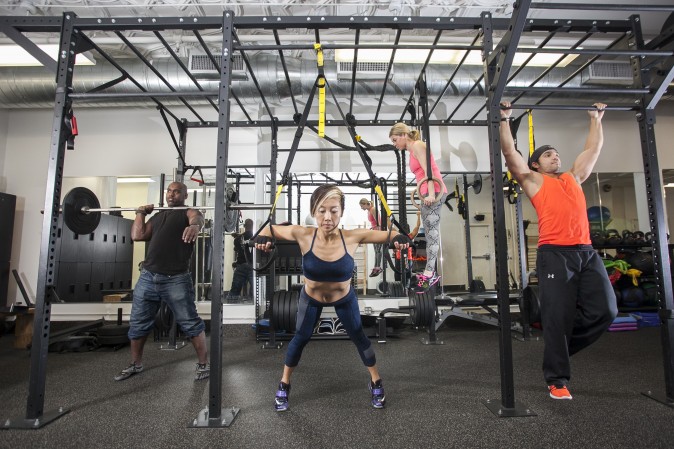 Where to Bring Your Personal Trainer

After more than a decade as a personal trainer, Rick Richey understood the limitations of working for corporate gyms.

As a trainer of trainers, he tried to teach students not only the minutia of human movement that they would need to succeed, but also how to build a business as independent trainers. But he realized that a critical piece of infrastructure was missing—a gym for independent training.

So in June, Richey, who is also a faculty instructor for the National Academy of Sports Medicine (NASM), opened Independent Training Spot (ITS), a second floor studio space in Midtown, two blocks north of Madison Square Park.

It’s like the Regus office rental but for gym space, Richey said. There are no memberships, certified personal trainers and massage therapists pay a flat fee per session ($30 or less if they buy in bulk), and train their clients in the fully equipped space. Richey helps them with business advice, offers frequent trainings, and will help assess issues they or their clients have.

“If I can help their clients get better, move better, and feel better faster, then I can get back to paying attention to my clients, which are the trainers themselves.”

But more than just the business model, trainers who go there say the way the space is set up, the professionalism of Richey and other trainers, and the little things Richey does, are what makes ITS the place they want to bring their clients.

Personal trainer Anthony Baugh said at least four of his clients said he was “more inspired in the space.” And he believes he’s not alone in this.

“I’m pretty sure I can say that for the majority of the trainers that go in there,” he said.

Baugh started coming to ITS at the beginning of the summer, when disenchantment with corporate gyms made him decide to go completely independent. He had taken a corrective exercise class with Richey a year and a half ago, so when a friend told him about ITS, he went to check it out and decided it was a place “I felt comfortable taking my clients to.”

Another trainer, Chris Hale, recently decided to become independent and switched most of his clients from a corporate gym setting to ITS. He said he finds ITS to be a more relaxed environment that “helps personalize the training experience,” and his clients love it.

He also appreciates the type of equipment and the open space there, which he finds works really well for sports training.

Both say Richey’s second opinion and/or the massage work he’s given their clients have been helpful.

Aaron Drogoszewski, another NASM instructor, said that Richey really sets the tone at ITS by taking care of people and the details that make their lives a little easier—like brewing a fresh pot of coffee for trainers every morning.

Gear at the Spot

ITS is the adult-sized gym version of a Montessori classroom.

There’s a big open lane in the center, with, as Baugh described them, “toys” down either side.

Hale said ITS is like a combo lab, workshop, and playground.

The walls are lined with all sizes of balls, bands, bars, ropes, cords, sleds, and weights.

Trainers combine these basic tools in creative ways—like Montessori students do with learning materials in the classroom—and Richey said trainers can do as much or more with them as they could with more specialized equipment.

ITS also has some lesser-known specialized equipment, including a 10-foot tilting steel ladder that can lean forward to simulate the workout of climbing an overhang. Trainer Douglas Taurel said he used this ladder as a way to train to climb Mt. Kilimanjaro and that it gives a great cardio, glute, and leg-burning workout.

Another set of versatile tools are monkey bars and four gladiator walls—sets of horizontal wooden bars affixed to the wall.

The monkey bars have holes at varying heights for J-hooks, so trainers can position bars at whatever height they want. Elastic bands and ropes can be attached to the gladiator bars in all sorts of ways for a pretty complete workout, Richey said.

“Basically the gladiator wall can be used as a station for almost everything you would want to do.”

ITS also has complete sets of boxing and kickboxing gear, as well as a Muay Thai punching bag.

Richey intentionally left the open space in the center, because one focus at ITS is performance enhancement and to enhance performance “you have to be able to move.”

“There are very few strength coaches who will say all you have to do is lift weights to increase your performance,” he said.

What you won’t find at ITS are treadmills, weight lifting machines, or hardly any piece of equipment you can sit on—a solid feature of almost all other gyms. Richey chose not to have fixed-motion machines, even though these are what most people are accustomed to, because he says the latest wisdom in the training world is that these types of machines don’t actually enhance performance.

“There is research study after research study that shows that the use of free weights increases performance more than using machine-based weights,” Richey said.

Because the equipment at ITS is not what most trainers are used to, Richey invites them to come play with it before they bring their clients.

“I encourage trainers to come in and get a workout in once, before having their clients come so they can familiarize themselves with the facility and equipment.”

Trainer education is a large part of the ITS model. Richey himself occasionally leads workshops, and every two weeks he organizes workshops led by outside presenters. Topics include how to do self-myofascial release, aerial acrobatic drills, partner-assisted stretching, and metabolic training. Workshops are open to all personal trainers, not just to those who train clients at ITS.

ITS also hosts workshops for NASM and other companies and is the new home of the Brookbush Institute of Human Movement Science, a movement education company founded by NASM trainer Brent Brookbush, Ph.D.

Brookbush who has his doctorate in physical therapy, also runs his practice from ITS, answers questions personal trainers have, and takes referrals from them and Richey.

Certified physical therapists can also rent time on one of two therapy tables, if their clients don’t mind being worked on in the main room of the gym.

Starting in 2015, ITS will also host the Everlast F.I.T. Club, a class for both trainers and clients who are working on their fight sport skills.

Also next year, ITS will host Everlast’s F.I.T. certification for trainers who want to be certified to train their clients to box and kickbox.

Overall, trainers who go there are immensely positive about their experience at ITS, saying it’s one of the cleanest, uncrowded, uncompetitive (among trainers) gyms they’ve been to.

Of the few limitations mentioned is the fact that given the size of the gym, 2,500 square feet, only eight trainers can be on the floor at one time, so they have to schedule carefully. Also nothing can be dropped (ITS is on the second floor, so the lease stipulates this), and there are only two showers.

But these and other minor quirks of growing a business are more than made up for by the supportive environment.

“This is definitely the healthiest, most positive, most supportive, training environment I’ve ever had the privilege of working in. … And a lot of that has to do with Rick. Rick’s just a really positive guy and really supportive, and he just really tries to help everybody,” Brookbush said.