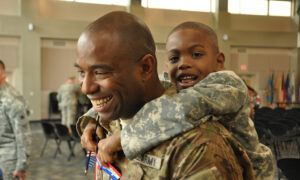 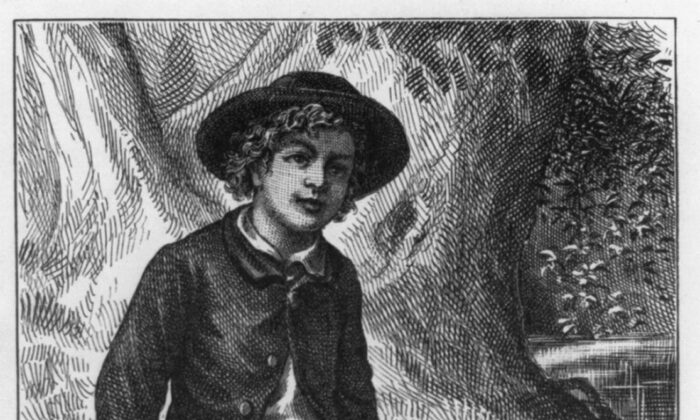 Few boys had as many adventures as Mark Twain's Tom Sawyer. A detail of the first edition frontispiece, 1876, from "The Adventures of Tom Sawyer." Library of Congress Prints and Photographs Division. (Public Domain)
Literature

Where the Wild Things Are: Literature, Boys, and Manhood

Mark Twain ends the “Adventures of Huckleberry Finn” with these words:

“And so there ain’t nothing more to write about, and I am rotten glad of it, because if I’d a knowed what a trouble that was to make a book I wouldn’t a tackled it and ain’t agoing to no more. But I reckon I got to light out for the Territory ahead of the rest, because Aunt Sally she’s going to adopt me and sivilize me and I can’t stand it. I been there before.”

Until relatively recently, it was common for boys even of Huck’s age—he was 12 or 13—to “light out for the Territory,” though not in the sense Huck meant. Just a century ago, teenage males often graduated eighth grade in school and then metaphorically lit out for the territory by joining the work force, laboring on farms to help out the family, seeking adventure in travel, or if they were slightly older, enlisting in the military.

Meanwhile, even just 60 years ago, many adolescent boys found adventure close to home. They took long canoe trips without adult supervision, camped in the woods with friends, shot at targets with their .22s, played rough games of war and sport, and came home only at supper after leaving the house after breakfast. I know these things because I was one of those boys.

And like many boys then and now, I was inspired in my adventures by stories I read in books, tales of boys out and about in the world, indulging in stunts and escapades, and coming of age as they faced challenges, obstacles, and enemies.

One of those books, read by generations of boys, is “The Adventures of Tom Sawyer.”

In this prequel to “Huckleberry Finn,” Tom Sawyer undergoes a series of trials and troubles. He falls in love with a new girl in town, Becky Thatcher, who spurns him after learning that he has previously kissed another girl. Tom and Huck witness Indian Joe murder a doctor in a graveyard. Bored with school, Tom slips off with Huck and another friend, Joe Harper, to live like pirates on an island in the Mississippi River and soon show up at their own funerals.

Later, Tom becomes a hero when, having been lost for several days in a cave along with Becky, he finds his way out and saves the girl’s life. Indian Joe dies locked up in the cave, which leads Tom and Huck to return there and find the murderer’s chest of gold. This sudden wealth lands the ragged, free-spirited Huck in the care of the Widow Douglas, whose “servants kept him clean and neat, combed and brushed, and … bedded him nightly in unsympathetic sheets that had not one little spot or stain with which he could press to his heart and know for a friend.”

Huck runs away. But at the end of the novel, the wily Tom persuades Huck to return home by telling him that he’s starting a gang of high-class robbers, and to join that gang Huck will have to be “respectable.”

In his “Conclusion” to “Tom Sawyer,” Twain writes: “So endeth this chronicle. It being strictly a history of a boy, it must stop here; the story could not go much further without becoming the history of a man.”

The bumps, bruises, and dangers of Tom’s adolescence have paved the way to adulthood.

Stories have helped Tom along this path. He is a boy with a fertile imagination—he leads his friends in playing elaborate games like pirates and Robin Hood—and that engine of the mind is fueled by the books he’s read. In Tom, we see the enormous influence of adventurous tales on the male spirit.

G.A. Henty and Howard Pyle were contemporaries of Mark Twain who also made their mark writing about boys seeking adventure and facing danger. Henty, an English war correspondent as well as a novelist, wrote a bookcase of historical adventures aimed mostly at boys. Though his protagonists are generally English, two of his titles—“In The Heart of the Rockies” and “With Lee in Virginia”—are set in the United States. Both stories feature teenagers transformed into adults by the challenges they face.

In his day, Henty’s books were wildly popular and remain so even now with some readers, especially homeschooling students.

Howard Pyle’s “Men of Iron” tells the story of Myles Falworth, a young squire training to become a knight and hoping to restore the good name of his dead father, who was falsely accused of treason. Again, we have a teenage protagonist who by his courage and his sense of honor battles his way into adulthood. This novel made such an impression on me that I can remember returning it to my school library with a mingled sense of joy at the dreams it inspired in me and sadness that the story had ended.

Robert Ruark’s “The Old Man and the Boy” and “The Old Man’s Boy Grows Older” are little read by teenagers today, which is unfortunate. Ruark, who came of age in Eastern North Carolina and who later won a reputation as a novelist and outdoor sports writer, recounts in these two autobiographies the boyhood he spent hunting and fishing with the Old Man, his grandfather, and the stories and wisdom he gained from this friendship. Like his grandfather, Ruark also possessed a romantic streak, as can be seen from this passage of the boy walking along a beach:

“There’s something pretty wonderful about a beach in the nighttime, with nobody around to make a lot of noises, and the gulls crying quiet, and the waves lapping soft and contented on the shore. I walked along looking for turtle tracks, and I got to thinking sort of like the Old Man. When God made water and mountains, I thought, He sure knew what He was doing.”

Ruark’s tales of the days spent with his grandfather might well inspire younger readers to connect with nature and to seek outdoor pleasures. Certainly, these young readers would gain from the wisdom the Old Man passed on to the young Ruark.

Like Ruark, Ralph Moody describes a childhood of living in the Great Outdoors, only this time in Colorado rather than in North Carolina. In the first volume of his “Little Britches” series, which some have proclaimed the “Little House on the Prairie” books for boys, it’s 1906, and we follow the 8-year-old Ralph from New Hampshire to Colorado, where he works from dawn to dusk for several weeks helping his sickly father repair a cabin for his family, faces bullies at school, and eventually learns to become a “cow poke.”

Ralph’s father, a man admired by his neighbors and beloved by his family, dies three years later. The last paragraph of this much-read autobiography reads this way:

“Father had always said grace before meals; always the same twenty-five words, and the ritual was always the same. Mother would look around the table to see that everything was in readiness; then she would nod to father. That night she nodded to me, and I became a man.”

Boys today still yearn for adventures in the books they read. This longing, for example, can be found in Gary Paulsen’s bestselling novel “Hatchet,” where we meet Brian Robeson, who survives an airplane crash in the Canadian wilderness and who then manages to survive his ordeal with the help of a hatchet given to him by his mother, and later by means of the survival pack he discovers on the downed aircraft.

“Hatchet” offers a portrait of a boy who overcomes his fears and uses his wits and courage to survive in desperate circumstances. Brian realizes “the most important rule of survival, which was that feeling sorry for yourself didn’t work. It wasn’t just that it was wrong to do, or that it was considered incorrect. It was more than that—it didn’t work.”

In “The Rembrandt Conspiracy” by Deron Hicks, young readers learn some art history while following 12-year-old Art Hamilton, son of a well-known art conservation scientist, as he attempts to thwart a massive heist of artworks in Washington, D.C. He is assisted by his best friend, Camille. Art’s intelligence, his technology skills, and his bravery make him a version of the Hardy Boys, but for contemporary readers.

Many readers are familiar with Bill Watterson’s “Calvin and Hobbes” cartoons. Here, the mischievous Calvin—that adjective is an understatement—often finds himself in trouble in large part because of his overactive imagination. In the blink of an eye, he can transform himself into a Tyrannosaurus rex, Spaceman Spiff, the hardboiled detective Tracer Bullet, or the superhero Stupendous Man.

Like so many adolescents, Calvin lives in his imagination and is always up for an adventure. We can safely guess that reading books about superheroes and dinosaurs are the sparks that fire up Calvin’s passions and imagination, just as reading coming-of-age books can help our own adolescent males navigate the joys and dangers of life.

In the final “Calvin and Hobbes” strip published by Watterson (available in “The Complete Calvin and Hobbes”), Calvin and his tiger buddy Hobbes prepare to plummet down a snowy hill on a sled. “It’s a magical world, Hobbes, ol’ buddy,” Calvin cries. “Let’s go exploring!”