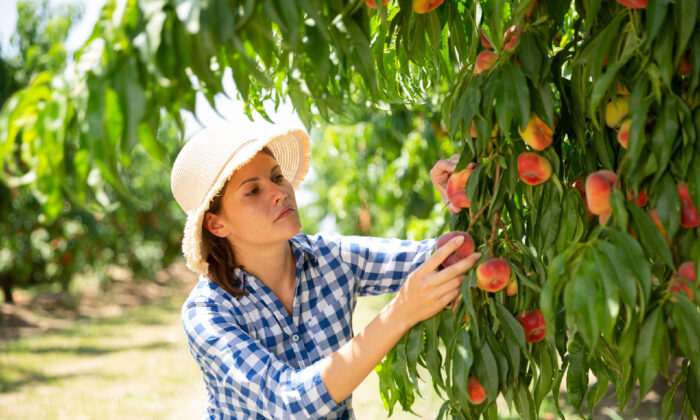 A visitor to Georgia picks fruit in the Peach State.(Lakov Filimonov/Dreamstime.com)
Destinations

Where Did States Get Their Nicknames?

In the mid-1800s, so much precious metal covered the ground in Nevada that prospectors could shovel it up. A century later, an avian disaster struck birdlife along the Louisiana coastline. Today, visitors can relive those chapters of the past in Nevada, Louisiana, and elsewhere while learning how they and other states got their well-deserved nicknames.

Nevada earned its “Silver State” moniker during its silver-rush days. Over millions of years, a crust of the metal formed on the desert’s surface, which prospectors could scrape up in their quest for riches. It took only a few decades for the territory of Nevada and surrounding states to be picked clean of the treasure. Both historic and modern-day silver, gold, and copper mines dot the state. Many are open to visitors for guided tours.

The brown pelican has been the symbol of Louisiana since the first European settlers arrived. It was adopted as the official state bird and appears on the Louisiana flag and seal. In the 1960s, however, the use of pesticides decimated the abundant native pelican population. In response, fledgling birds were imported, steps were taken to protect their habitat, and the pelicans have recovered. They continue to amuse visitors to Louisiana with their untidy but effective dives into the water to catch fish.

Another flying animal (and insect)—the bee—is a symbol of hard work and industry. The bee is honored by the seal and nickname of Utah—the Beehive State. A beehive is emblazoned on the state flag, and “Industry” is the state motto. In addition, early Mormon settlers have been described as carrying a colony of bees with them, and they named the area “Deseret,” which references honeybees in The Book of Mormon.

If the fact that “The Gem State” is Idaho’s nickname makes you think of precious stones, think again. Imaginative tourism-promotion folks tout Idaho as a gem because of its magnificent scenery and abundant natural resources. Snowcapped mountain ranges, steep canyons, and vast lakes are among the attributes that attract lovers of the outdoors. The rugged landscape includes some of the largest unspoiled natural areas in the United States. In that way, Idaho certainly is a gem.

West Virginia also is a land of peaks and valleys, so it’s no surprise that “The Mountain State” is its unofficial title. The Appalachian Mountains run through the eastern portion, and the average elevation is higher than any other state east of the Mississippi River. It has been said that if all of the mountains in West Virginia were flattened, the state would be as large as Texas. No wonder it’s also referred to as “the Switzerland of America.” Or that exploring tiny, charming mountain towns is but one reason to visit the state. They combine exciting outdoor adventure and breathtaking settings with intriguing history, culture, and heritage.

The nicknames of some states refer to plants or flowers that proliferate within their borders. That includes South Carolina, which is known as the Palmetto State. The symbol of palmetto trees first appeared on flags there in Revolutionary War times when, historians tell us, troops used wood from them to build a fort.

An image of a Sabal palmetto tree was added to the state flag after it seceded from the Union in 1861. It’s even mentioned during the salute to South Carolina’s flag: “I salute the flag of South Carolina and pledge to the Palmetto State love, loyalty, and faith.”

In 1900, an election was held among schoolchildren in Mississippi to select the official state flower. The magnolia received nearly three times as many votes as the combined total for the cotton blossom and cape jasmine. Based upon that result, the magnolia grandiflora was designated as the official state flower in 1952. In late spring, large off-white blooms decorate the branches of magnolia trees that dot the local landscape. Fossils of the fragrant flowers have been dated back over 20 million years. Other factoids include that magnolia petals are edible, and the flower gave its name to the Magnolia Bowl, a football rivalry game between the University of Mississippi and Louisiana State University first played in 1894.

The sunflowers in Kansas reach their height a bit later than magnolia trees and flowers. From late summer to early fall they provide a lovely backdrop for photos. While sunflower fields are located throughout the state, many that are open to the public are in central and eastern Kansas. Some farms allow people to pick a few stems and take them home for transplanting.

Food is the focus of some state nicknames. That’s true of Georgia, where a tree first cultivated in China and later Persia (modern-day Iran) found favorable growing conditions that produce peaches that are known for having excellent flavor, texture, and appearance. The Peach State recognizes the crop as the official state fruit, and the peach is featured on the U.S. Mint’s bicentennial commemorative quarter for Georgia. Travelers can partake of this bounty at pick-your-own orchards and in cobblers, crisps, candy, pie, and many other taste-tempting ways.