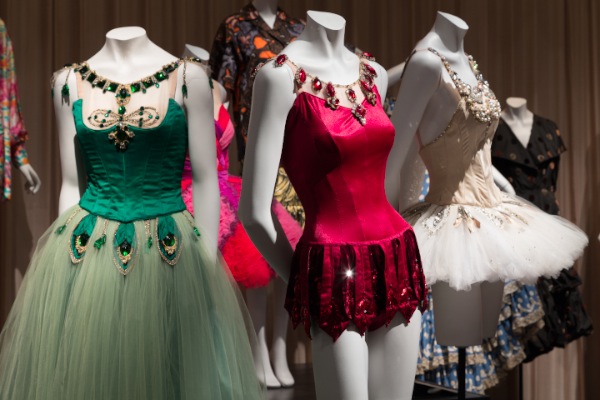 Where Dance, Drama, and Fashion Collide

From a world where we see only the dazzling show on stage, comes an exhibition that throws light on the freedoms and restraints of designing costumes for dance.

“Dance & Fashion,” currently on view at The Museum at the Fashion Institute of Technology (MFIT), features nearly 100 dance costumes and dance-inspired fashions, ranging from the 19th century to the present, many of which have never been exhibited.

Walking into the exhibition is overwhelming. It’s as if the protagonists of various shows throughout decades have conspired to flood the audience and mesmerize us with color, glitter, and drama.

Each display combines stage costumes and fashion ensembles that demonstrate the cross-pollination of creative ideas between dance and fashion throughout decades.

A great influence of popular culture in the beginning of the 20th century were the costumes of the Paris-based Ballets Russes, with impresario Serge de Diaghilev at the helm.

The relatively short-lived ballet company that operated between 1909 and 1929, reignited the taste for oriental fashions through Diaghilev’s staging of the ballet “Schéhérazade” in 1910. One of the original costumes from the ballet designed by the artist Léon Bakst is the centerpiece of the oriental display. Next to it are two of the most notable male costumes on the theme—one worn by Rudolph Nureyev and another by Mikhail Baryshnikov.

The same display also has an ensemble from Yves Saint Laurent’s 1976 “Ballets Russes” collection for which he was accused of being too theatrical but which was the most influential fashion collection of the 1970s.

The purpose of the exhibition, according to MFIT director and chief curator Valerie Steele who spoke at the institute’s fashion symposium held in conjunction with the exhibition, was to look at the relationship between dance and fashion and the vectors of influence that went back and forth between high fashion clothes and dance costumes.

Steele mentions how the portrayal of Odile of “Swan Lake,” as a black swan in the 1940s, influenced many designers including Christian Dior. His Black Swan ball gown created for his Fall-Winter 1949–1950 collection is part of the exhibition. Prior to that, in the 19th century, Odile was portrayed in various colors.

Conversely, Marc Happel, costume director of New York City Ballet, has said that his inspiration for the costumes that he was commissioned to design for “Symphony in C” were inspired by the fashions of Dior and Balenciaga.

On display are also costumes from the Martha Graham Dance Company, some designed and worn by Graham herself. Others, such as the serpent-like gown for “Tangled Night” performed in 1986, were a collaboration, in this instance, between celebrated American designer Roy Halston and Graham.

As far as the dance costumes go, it is immediately clear that these are neither ready-to-wear nor haute couture fashion. Get too close and the stitching is often not perfect, and there is also the wear and tear from usage.

But take a few steps back, and perhaps, with half-closed eyes, imagine what it must have been like to see one of the costumes on a dancer under stage lights, revealing the three-dimensional qualities of the body as it punctuates the musical score. These clothes are made to move unlike any other clothes. The need that they have to fulfill is not just ultimate comfort but kinesthetic beauty.

Perhaps one of the most revolutionary and surprisingly mobile costumes is the one created by Dutch fashion designer Iris van Herpen for Benjamin Millepied’s ballet “Neverwhere” for the New York City Ballet.

In her own words, van Herpen who also studied ballet between the age of 4 and 18, wanted to create “the opposite of a frothy tutu.” With the help of computer technology and plastic sheeting, the costume is reminiscent of medieval armor, modern architecture, and some sort of deep-sea crustacean all rolled into one.

Van Herpen’s costume has pushed the genre far beyond any imagined limits—which is that much more surprising given the fact that most designers have great difficulty when they enter the world of dance costume design.

Wendy Whelan, principal dancer of the New York City Ballet, explained at the fashion symposium that knowing how to cut a line for an athletic body is very different from designing for a fashion runway model. “It takes someone who thinks outside their natural world to be able to customize for someone as unique as a dancer,” she said.

Happel also spoke at the symposium about the history of the costumes on display and the process of collaborating with fashion designers as they first delve into the world dance.

The collaboration is not always a success, but this seems less than evident to the audience. Neither Whelan nor Happel could think of any costume disasters, the difficulty stems rather from certain unnamed designers’ reluctance to learn and adapt to new design techniques fit for the stage.

Among Happel’s heroes is his predecessor Madame Barbara Karinska. She was the only costume designer to ever receive the Capezio Award in 1962. The annual honor was given for outstanding contributions to the world of dance.

It is easy to see why Karinska’s designs were so successful. In a slide shown by Happel we see one of her designs in action for the ballet “La Valse,” an ensemble that is also part of the exhibition. The skirt is made up of over 20 multicolored layers of tulle with the outer layer being gray. The dancer’s movements continuously reveal the layers of tulle in varying degrees and flashes of color, achieving what must have been a mesmerizing effect. The costume encapsulates a finely tuned understanding of form, function, perspective, and drama, not to mention color. But even more surprising is its simplicity.

Karinska’s design perfectly demonstrates the ruling principle by which any designer must be guided if they ever attempt to design for a dancer—movement.

Dance & Fashion is on view at The Museum at the Fashion Institute of Technology until Jan. 3, 2015.