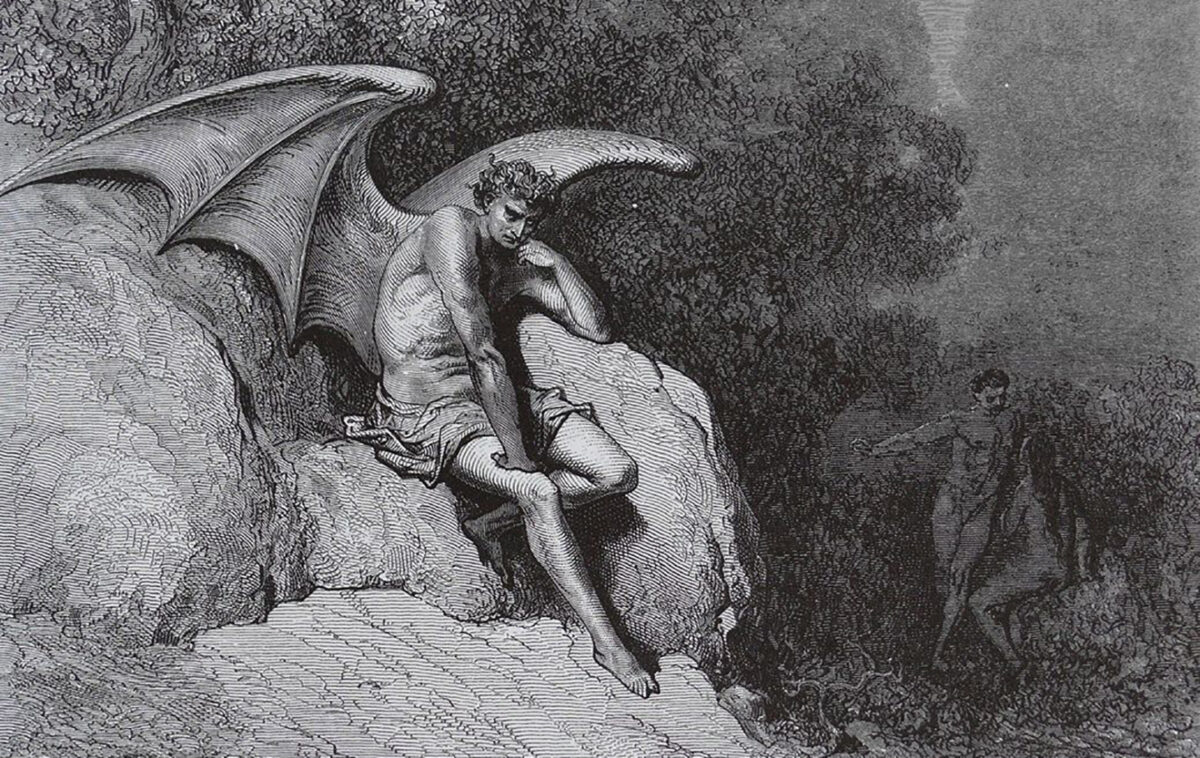 "O Earth, how like to Heaven, if not preferred," 1866, by Gustav Doré for John Milton’s “Paradise Lost.” Cropped Engraving. (Public Domain).
Arts & Tradition

When Unchecked Evil Becomes the Object of Admiration

This series focuses on the art of Gustav Doré and started by looking at his illustrations for John Milton’s 17th-century epic poem “Paradise Lost.” In this next article, Satan has just finished rallying the rebel angels after they fell to hell. He calls out to them, shames them, and reinvigorates their passion to resist God. At first, he speaks only to one rebel angel, but it’s not long before one turns into many, and his troops begin to regain the strength to continue their mission.

Despite Satan’s instigating their fall from heaven, the rebel angels rise up to unabashedly continue following him. Milton describes the scene:

So numberless were those bad angels seen
Hovering on wing under the cope of Hell
‘Twixt upper, nether, and surrounding fires;
Till, as a signal giv’n, th’ uplifted spear
Of their great Sultan waving to direct
Their course, in even balance down they light
On the firm brimstone, and fill all the plain …
Forthwith from every squadron and each band
The heads and leaders thither haste where stood
Their great Commander …
Though of their names in Heav’nly records now
Be no memorial, blotted out and razed
By their rebellion, from the Books of Life
(Book I, Lines 344–350, 361–363)

Gustav Doré’s illustration lets us look deeper into Milton’s passage. In it, he depicts a legion of rebel angels flying through hell like a flock of crows over billowing smoke that frames both sides of the composition. Only Satan, who leads the pack, and some rebel angels following closely behind can be identified as individuals. Otherwise, the rebel angels merge together into one swirling presence.

If we take a moment and consider this scene in reference to another text, it’s not a great leap to see similarities with George Orwell’s “1984,” in which subjects uniformly fall in line and individuality is absent. We are led to ask: Where does this uniformity, this lack of individuality, lead Satan and the rebel angels?

The Beginning of Tyranny

He spake: and to confirm his words, out flew
Millions of flaming swords, drawn from the thighs
Of mighty Cherubim; the sudden blaze
Far round illumined Hell: highly they raged
Against the Highest, and fierce with grasped arms
Clashed on their sounding shields the din of war,
Hurling defiance toward the vault of Heav’n
(Book 1, Lines 663–669)

Arguably, this uniformity and lack of individuality can lead to tyranny. In Milton’s passage, Satan continues to talk to the rebels and unifies them under a single thought: Hate and defy God and heaven. Nowhere do the rebel angels take a moment to rationally think for themselves; they are but shadows of Satan’s tyrannical intentions.

Doré creates a highly energetic scene for this passage from Milton. Seven rebel angels are silhouetted on top of a cliff, where they blow trumpets. The rest of the rebel angels hear the call and come from all over. Many leap into the scene galloping on horses, and those in the distance light the darkness of hell with their flaming weapons.

I read these passages, look at these images, and think of the Nuremberg trials, where Nazi Party members were tried for the atrocities committed under Adolf Hitler’s reign. Many Nazis invoked the defense that they were only following orders. This defense did not hold up in court. It makes me wonder: If these rebel angels were on trial, what would be their defense?

The Tyrant Takes His Throne

The rebel angels help build an empire in hell that seems to be an inversion of heaven, giving perverted credence to the ancient phrase “as above, so below.” The empire, Pandeamonium—a title that embodies the effects of Satan’s intentions—is where Satan takes his place as the ruler of hell.

Meanwhile the winged heralds by command
Of sov’reign power, with awful ceremony
And trumpets’ sound throughout the host proclaim
A solemn council forthwith to be held
At Pandaemonium, the high capital
Of Satan and his peers: their summons called
From every band and squared regiment
By place or choice the worthiest …
High on a throne of royal state, which far
Outshone the wealth of Ormus and of Ind
(Book 1, Lines 752-759; Book 2, Lines 1-2)

Here, Doré depicts Satan taking his throne inside a grand palace at Pandaemonium. The spotlight is on Satan, who stands in front of his throne and raises his arm in a gesture symbolic of his power in hell. Many rebel angels come to worship and adore him, and they await his counsel.

Let’s consider how these passages might relate to our inner domain. In the first article in this series, we concluded that, like God exiling Satan and the rebel angels from heaven, we too must exile those things in our hearts and minds that keep us from the goodness of God. In the second article, we concluded that, if left unchecked, evil can multiply. What, then, can be derived from Satan’s rallying his troops to hell, and what might his taking the throne in hell represent?

To me, it represents the idea that if we don’t safeguard ourselves from evil, evil will grow so strong within us that we will begin to justify its presence and even admire and extoll it. We are unable to think rationally and calmly while possessed by an evil state of mind. The fact that such a state causes us so much pain is lost on us. Losing a sense of our individual selves, we may even confuse this state for who we really are, or refuse responsibility for our actions because of its hold on us.

In this state, we become subjects of a tyrannical force within ourselves, and our only defense for our actions can be that we are or were following orders. But we are much more than this, are we not?

Gustav Doré was a prolific illustrator of the 19th century. He created images for some of the greatest classical literature of the Western world, including “The Bible,” “Paradise Lost,” and “The Divine Comedy.” In this series, we will take a deep dive into the thoughts that inspired Doré and the imagery those thoughts provoked. For the first article in the series, visit “Illustrious Ideas and Illustrations: The Imagery of Gustav Doré.”