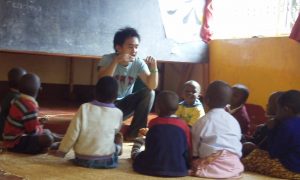 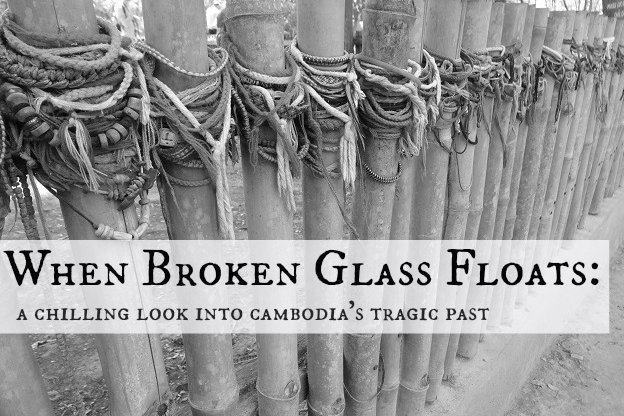 I put my Kindle down and close my eyes, grimacing. It is not the first time this story has overwhelmed me.

I sit there rubbing my eyes, taking a moment to collect my thoughts. I’m only a quarter way through it, yet this book is consuming me. Time for a break, I decide. I look around.

A lady sits a couple of tables away, sipping on an iced coffee while tinkering with her iPad. On the far end of the cafe sit two middle aged men, laughing cheerfully about something, their palms wrapped around mugs of Angkor beer. Beyond them, a small stretch of the Phnom Penh riverfront, and the faint sounds of traffic passing on the wet road before it.

As my mind settles, I pick up the book to continue reading. As difficult and depressing as it is, the story has captivated me, and despite all the death and suffering I am desperate to know how it ends.

The book is Chanrithy Him’s “When Broken Glass Floats,” a gripping memoir of her life growing up under the Khmer Rouge. I am only halfway through it, but it has brought to life a period of history that, until now, I have known very little about. A genocide. One quarter of the population dead. A brutal dictatorship, an entire country forced into slavery, and the mass execution of anyone educated enough to resist. In just 4 short years (1975–1979), the Khmer Rouge managed to decimate Cambodia, crippling the country almost beyond repair. I am unsure why I never learned about this in school.

I read and read, until my battery light flashes red and finally dies. I’m relieved in a way; I’ve been sitting here for hours, my eyes hurt, and it’s already dark outside. Enough for one day.

Children of Genocide Survivors Can Inherit Trauma in Their DNA

I wake up late the following morning. Breakfast is served at the cafe outside my room, and I continue Chanrithy’s book while waiting for it to be cooked. I manage another 20 or so pages, eat quickly, and then head back to my room to wash up and get ready. Today I am visiting Tuol Sleng, the famous S-21 genocide museum near the center of Phnom Penh. Here lies an abandoned high school, turned into an interrogation prison where tens of thousands of Cambodians were tortured and marked for death.

After waiting for the rain to settle, I head out and arrive around mid-afternoon. The moment I enter the gate, I feel the eerie vibe it is famous for.

Despite the many visitors, the place is silent. It only adds to the creepiness. I walk sheepishly into the first room; a high school classroom turned into a torture chamber. From the doorway I see an iron bed, with a photo on the wall of the torture victim found chained to it. I am not quite sure what to think. I snap a photo, and exit quickly.

Most rooms in the first building appear the same; an iron bed with ankle cuffs, where victims were bound and tortured into confessions. As I wander through each of them, I think back to Chanrithy’s book, to the stories of people being taken and never returning. Even standing here, seeing it with my own eyes, it is difficult to believe the stories of terror are real.

Eventually I make my way to the second building. Here lies the photo room. The Khmer Rouge were meticulous in their record keeping, photographing and profiling all 20,000 prisoners before they were tortured into confession. Once “processed,” they were taken away to be executed.

The photos represent many of the country’s most wealthy and educated at the time, mass murdered in an attempt to create a completely uneducated, communist society. The immense waste of life is impossible to comprehend or understand. One can only wonder how different Cambodia would be today if these great minds were still alive.

Among the photos are faces of children, some who look as young as 8 or 9.

I think back to when I was that age, innocently riding my bike and watching cartoons. The contrast is heartbreaking.

I spend a long time in here, maybe an hour. One by one, I study the faces of all the prisoners. Each of their eyes is sad, defeated. Their fear is unmistakable. Most appear to have accepted their fate.

Yet among them, some appear defiant, refusing to be broken. I admire them, and wonder if I’d have been strong enough to do the same.

Of the 20,000 that passed through here only 12 made it out alive; their stories of survival displayed on one of the classroom walls. Before I start reading I observe the 5 or 6 other visitors, staring at the wall and reading silently. Each of them stand frozen, their lips slightly apart, eyes flashing back and forth across the page in disbelief. Soon I find out why. The stories are straight out of a horror film; tales of being electrocuted to unconsciousness, forced to eat their own excrement, fingers being broken and fingernails being ripped off and covered in salt. Prisoners were tortured into confessions of being spies or conspiring against the State, justifying their execution. Yet one confession was not enough. Torture continued until the victim admitted guilt of their entire family, their parents, brothers, sisters and children, justifying the execution of all of them.

I read each story, wondering to myself what I would’ve done. How strong would I have been? Would I have betrayed my Mum and Dad, my brothers, to end my own suffering? It is mind numbing; too much for me to try and imagine.

Copyright © 2014 by Bren On The Road. This article was written by Brendan Lee and originally published on BrenOnTheRoad.com