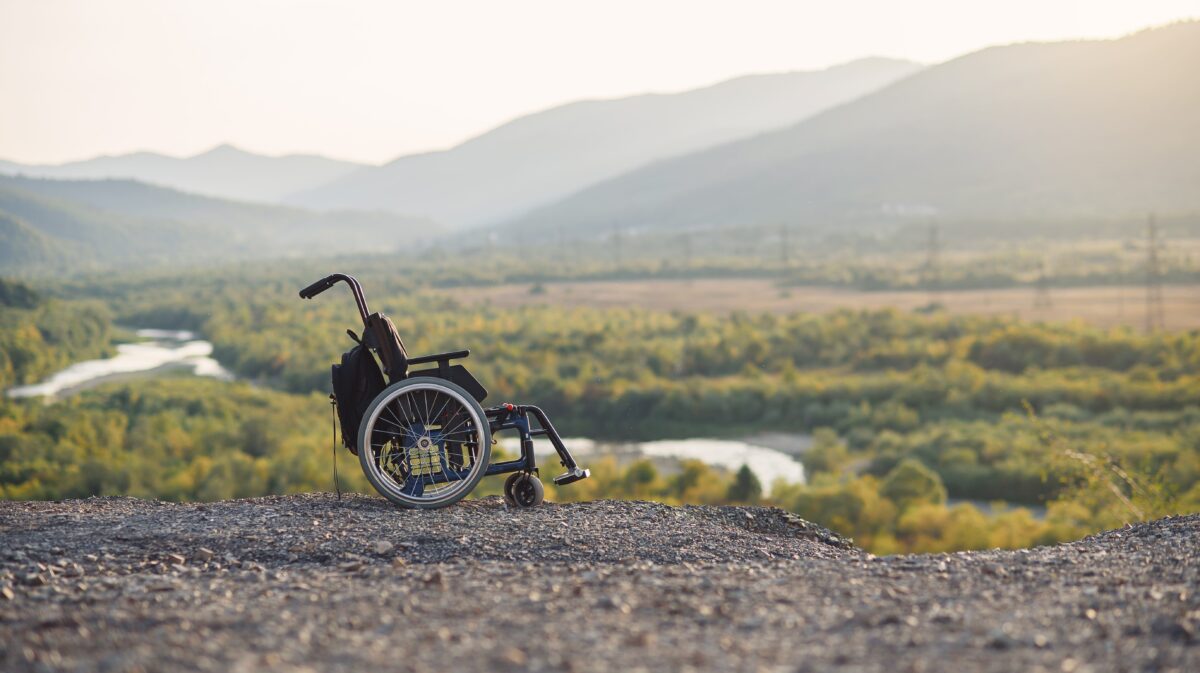 Wheels in the Wilderness: One YouTuber’s Mission to Encourage Fellow Wheelchair Users to Explore Nature’s Wonders

A New Hampshire woman hopes to inspire others with disabilities to explore the ‘wild places’ in their wheelchairs
BY Meghan Pierce TIMEJune 1, 2022 PRINT

Growing up, while other girls aspired to become nurses or ballerinas, Aislinn Graves said she dreamed of becoming a national park ranger. Her dream was inspired by her family’s extensive summer road trips and her love of nature. “We spent about two or three months on the road, visiting all the national parks, national monuments and stuff,” she said. “I remember swimming in Lake Jenny in the Grand Tetons. I remember being in King’s Canyon. … I’ve flown through the Grand Canyon and hiked through Yellowstone. … So I grew up with this deep love and reverence for the wild places.”

Aislinn takes the phrase “wild places” from John Muir, the naturalist known as the “Father of the National Parks.” “He talked about how the wild places are vital for the nourishment of your soul. We need nature. … When you look through his quotes, you will know what is deep in my heart.”

Aislinn is on a mission to inspire others like her, who suffer from mobility issues, isolation, and depression, to get outside and into the “wild places.” She hopes to do this through her “Wheels in the Wilderness” YouTube page, where she chronicles her adventures on handicap-accessible trails.

While she never became a park ranger, she led an active life that included martial arts and long-distance running. However, in 1992, she was in a car accident that damaged her spine. The injury was more severe than she initially thought and was made worse by a condition she had not been diagnosed with at the time, polycystic ovary syndrome. “At first we didn’t realize just how bad it was. I went to the chiropractor, did all those things, tried to stay active. But as time went on, more and more damage became apparent.” And because she has polycystic ovary syndrome, she is insulin-resistant. “My body doesn’t process glucose properly. … When I stopped being able to be active, the weight just piled on.”

Aislinn and her husband David Graves, who have been married since 1990, call New Ipswich, New Hampshire, home. They love spending time with their daughter, son-in-law, and grandchildren, and as musicians, they participate in the worship team at their church. Aislinn stayed at home to raise and homeschool her daughter. She now works as an artist and sells her work online. David works as a cyber security engineer.

About two years ago, while their daughter’s family was staying with them, David began hiking with his grandson. This led to family outings, such as hiking some of New Hampshire’s many mountains and taking trips to places where they could zipline. Because of her mobility issues, Aislinn was left out. “Man, I was feeling so isolated, lonely, depressed,” she said. When their daughter’s family went back to Texas, David didn’t want to stop hiking, saying that the family hikes reinvigorated his love of the activity. “We spent a lot of time together during Covid [the pandemic],” Aislinn said. “And that reconnection of our relationship was precious and I didn’t want it to stop.” She also wanted to get back out into nature.

After a difficult hike on a steep trail using her wheelchair, the couple decided to invest in a scooter that could take on hiking terrains. This also meant buying a trailer to haul the large scooter. This cost about $6,000 altogether, which they had to save and budget, since the insurance company said if the scooter wasn’t being used in the home, they wouldn’t pay for it. This is the reality for people with mobility issues, she said—people who are neither fully disabled, nor fully able-bodied. She can walk and stand, but only for a short time because it causes her chronic pain to flare up. “Let me tell you about my people. … We’re not disabled enough for things like insurance companies to cover things like wheelchairs, mobility scooters. So you either learn how to pay for it yourself or live without,” she said.

The investment in a scooter has made a huge difference in the quality of her life, she said. “Spending time in nature reduces your blood pressure, reduces your stress, and helps fight depression,” Aislinn said. “I want to encourage people to get out. … One of the biggest problems when you are mobility-impaired is isolation. You are stuck while everybody else goes out. … It’s good for my mental health, good for my physical health, too, because it’s getting me out and about, and even though I can’t walk very far, it’s more activity than just sitting in the house.”

Since David had already started his own YouTube channel documenting his hiking adventures, “Hind Feet in High Places,” he told Aislinn she should start one, too. She hopes her channel will not only chronicle her hikes, but also raise awareness within the hiking community about the need for more accessible trails, and let people like her know that there are resources for them and hope. “The more I thought about it, the more I realized I want to be a voice for the handicap community,” she said. “My motto is to choose joy. We are a people of faith.”

At the time of this story’s publication, she has 51 subscribers. “So I’m not real big yet. I’m not an influencer yet, but I’m working on it,” she said. “But most of the feedback I’ve been getting has been very positive.” She was also invited by the Nature Conservancy in New Hampshire to speak at a ribbon cutting for a new accessible trail in Manchester, New Hampshire. For Aislinn, she has only just begun. “I want to encourage more people like me to say, ‘Enough. I don’t want to be sidelined anymore. I want to get out.’”