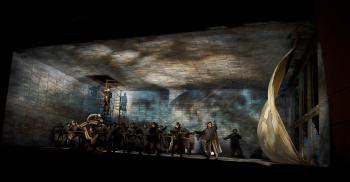 A scene from the Canadian Opera Company's 2010 production of The Flying Dutchman. (Michael Cooper)
Life & Tradition

What’s Not On TV: The Trying Dutchman

Zoe Ackah
View profile
Follow
biggersmaller
Print
I don’t watch TV any more. Yeah, really. After spending a year in Ghana, West Africa, I was already severed from the cable umbilical cord. I stayed free. Why should I pay you to talk down to me, pander to my lowest inclinations, and fill my living room with a simulation of life designed to stop me from living my own?

I have now survived three years without television, and some surprising things have happened. I’ve developed hobbies, interests, and areas of near expertise.

To inaugurate this column, I went big. I went to the opera. I like opera. It is epic in its forces—big orchestra, big voices, big drama, and an overall aura of exclusivity and pomp that makes it giddy fun for an otherwise earthy and sensible individual like me.

To enjoy opera you must study up. Listen to the opera in advance. Go to the library and take out the libretto (the words without the music) and a couple of books about the composer and time period. If you can read music, take out the score and have a look at how the work is put together. At the very least, go to the company’s website and read all the online goodies and listen to a few excerpts.

The Canadian Opera Company’s production of Wagner’s The Flying Dutchman was like going to see a Leaf’s game and watching them lose—a familiar feeling for Toronto hockey fans. You love the sport, you want to be there and have it all work and it just doesn’t. Every scene you hold out hope, you think they might score, but even if they do score once or twice, it’s not enough to win the game.

The blame rests squarely on the director Christopher Alden’s shoulders. Allan Moyer’s set was interesting and innovative but few of the possibilities it offered were realized by Alden. The cast hobbled around the slanted stage spending most of their time at the bottom of the angled deck in the corner of the stage that possessed zero energy or possibility.

A physically collapsed Dutchman never moved past the crumpled defeat of the first scene into the “complete calm and dignity” Wagner called for by Act II. I found myself muttering under my breath that if our Dutchman clutched his chest and fell on the floor one more time (or scooped for another note) I would send him to his maker myself!

Again, I blame the director. When singers are forced to look away from each other in a scene where their mutual gaze is the actual subject, one wonders why no one at COC piped up and said, “Uh, Chris, that’s not working.” Oh, was the Dutchman actually gazing at the miniature portrait of Senta in his hand? Wow, how clever; she hoists around a ridiculously huge and hideous portrait of him and he stares at a tiny one of her none of us can see. Everyone around me, except the couple audibly snoring behind me, realized something was amiss. There are too many examples.

Thankfully Sandra Horst got her puck in the net. The chorus stole the show, which is no surprise. The choruses are some of the juiciest parts of Dutchman. The men were especially sparkly. They actually woke up the sleeping couple behind me.

Julie Makerov was a fine Senta. She has a powerful voice big enough for the role, and could be heard clearly over the orchestra. Good direction would have helped add that extra ten percent to her performance that was needed. As it was there was no chemistry between her and the Dutchman, making their scenes together nearly unwatchable. Their vocal blend in duet gave evidence to this.

I would like to put in a good word for Canadian tenor Adam Luther who did well as the Steersman. He spent a lot of this production glued ridiculously to the walls (I know, a Romantic opera with an Impressionist look) but I’ll keep my eye out for him in other productions. I also liked Mats Almgren as Daland. He possessed the most stage presence of all the principals.

However, it was better than television, lumps and all. There are few better experiences than feeling the waft of music coming out of the pit and off the stage. Like a good fan, I complain, but remain loyal to my home team. I’ll be there for Maria Stuarda this coming Saturday.