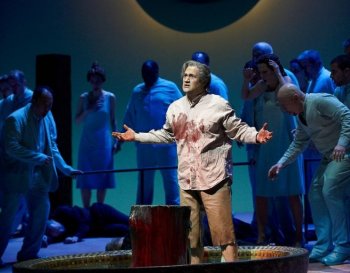 I looked forward to seeing Idomeneo. I like Baroque music. Not that it is a Baroque opera. Mozart was commissioned to set Idomeneo as an opera seria (serious opera) though this late-Baroque style was out of fashion by the time Idomeneo was performed in 1781. Mozart sticks pretty faithfully to the old-fashioned form, except when he just can’t help himself.

Opera seria came into fashion in Italy in the early 18th century as a reaction to bad libretto writing. Okay, not exactly, there were other motives, but really, just get a book out of the library to get the socio-political goodies. Bottom line: Highbrow opera patrons needed more elevated subject matter. It was a neo-classical movement that looked to ancient Greece and Rome for mythological and heroic characters as well as literary and stylistic standards.

Idomeneo dramatizes the tribulations of Idomeneus, King of Crete. He has to sacrifice the life of his son to appease the god Neptune. There’s a man-eating sea monster. I won’t spoil the ending.

The Doctrine of the Affections was batted about by musical theorists during the mid to late Baroque period when opera seria was popular. Musical conventions were set down based on theories of “affect.”

Each song should be set somewhere on the graph between love and hate, joy and sorrow. Quick tempos, high vocal range, and loud dynamics indicate an excess of joy or hate. To affect pain in us, the audience, composers used chromaticism, minor keys and dissonance. Pleasure was generated using opposite musical devices.

Ultimately an aria should be ruled by a single emotion or affect, three being the agreed upon maximum number of allowable feelings.

Theorists of the period associated certain dance rhythms with certain affects. For example a loure is associated with pride or arrogance, a march with heroism and fearlessness, and a minuet with cheerfulness, though only of the moderate variety. For real jubilation you need a gavotte. Keep an eye out. The influence of French dance rhythms weave their way through Idomeneo.

In proper opera seria style, Idomeneo has the prescribed three acts, the libretto has plenty of elevated language, and there are five main characters, none of which are servants or are in any way common. The recitative forwards the plot. The arias explore the prescribed mix of emotions frozen in time.

You’ll notice our hero, Idomeneo’s son Idamante, is sung by a woman. When Pope Urban VIII banned women from singing on stage in 1630, the heroine (soprano) and the hero (alto) roles in operas were sung by men. Castrated before puberty so their voices would not change, these post-op performers where prized for the strength and beauty of their voices. The castrati were huge stars across Europe—an arrangement that was apparently far less offensive to the pope than having to listen to women sing.

Not all of Europe was Catholic, and not everyone obeyed the pope. It was during this era that the prima donna arrived as well. By the 19th century they had beaten out the castrati and luckily we now have prima donnas of every gender, in every profession.

The Canadian Opera Company’s production of Idomeneo is worth seeing. You may be excited to learn our own Isabel Bayrakdarian is singing Ilia, fresh from the Paris Opera. Bayrakdarian's Ilia was more vulnerable than defiant. Her warm and very feminine presence made her relationship with Idamante (Krisztina Szabó) intimate and believable. They worked beautifully together.

Krisztina Szabó as Idamante really stood out. The white pimp suit and ever-present spotlight were not needed. She phrases beautifully. She gives the words space. She knows how to give a feather light touch to a conventional Baroque phrase, and she can give some manly grit to a pants role when it’s needed. If only she had some to spare.

Paul Groves gave us a rather young Idomeneo. Though it is a tenor role, it seems to require a fuller, more focused and nuanced sound. The mellismas seems forced, as if he was barely holding on, thinking of the notes and not feeling them.

Tamara Wilson was fun to watch. Elettra is rather like a Disney bad girl, complete with a written-in Disney-villain laugh as she’s kicked to the curb in the third act. Wilson has a concentrated, connected tone with plenty of power. She sang with an effortlessness and naughtiness that made her almost comic relief in the middle of a proper Greek tragedy.

François De Carpentries’ direction was more hit than miss. The singers were in the right place at the right time, allowing the drama to unfold between them in a believable and often touching way, especially between Ilia and Idamante who really formed the core of this production. The way the chorus was handled was particularly effective (and affective).

However, there were some “director’s prerogative” moments that left us wondering. After discussion with the fellow sitting in front of me during intermission, a quick consensus was reached. We could have resigned ourselves completely to the director’s prerogative if we had gotten a really good-looking toothy sea monster. They must have left it at the O'Keefe Centre.