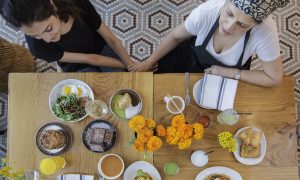 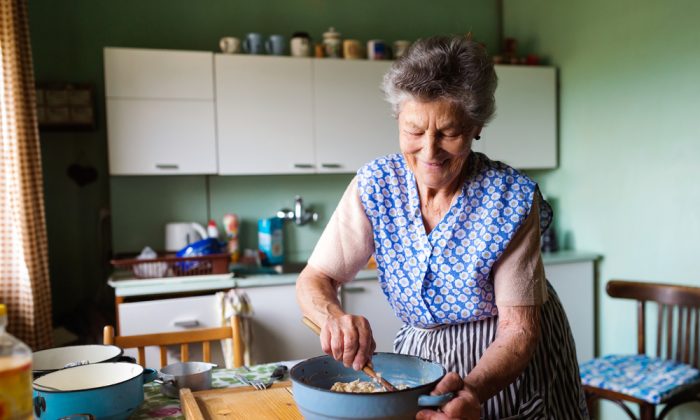 Our elders’ ways with food are etched into our identity, in memory if not in practice. (Shutterstock)
Food & Dining

There's wisdom in the clever, thrifty kitchen practices of our elders
By Ilana Sharlin Stone

My Auntie Rae was single and not much of a cook. Frugality ran through her veins, a vestige of her Depression-era teenage years. When my sister and I slept over at her Los Angeles apartment in the early ‘70s, we usually ate a modest dinner out: at a deli or International House of Pancakes (pre-IHOP days). Occasionally, she’d broil lamb chops and boil vegetables until they practically dissolved.

I’m not sure when I first noticed the Manischewitz Borscht jar in her refrigerator that contained, instead of beets, a murky, dull green liquid, but it was best that I waited until adulthood to ask about it. As a kid, if I’d known she drank this leftover broccoli cooking water as a sort of chilled tonic, I would’ve turned that same shade of green.

Our elders’ ways with food—the warm and endearing habits, along with the quirky ones that once made us flush with embarrassment—are etched into our identity, in memory if not in practice. Often the most accessible pathways back to our heritage, they connect us with loved ones and turn on the emotional taps. Even a fleeting childhood memory, like drinking from a cup that was fashioned by a parent from a used frozen orange juice concentrate tube, can evoke laughter, nostalgia, or shame.

Some practices we choose not to adopt—like my aunt’s broccoli tonic, or my mom’s annual Passover ritual of reserving a chicken soup “starter” in the freezer to kickstart next year’s soup—but plenty live on in our 21st century kitchens, and are just as relevant to a sustainable and healthy lifestyle.

I reached out to food writers of diverse backgrounds and ages, who generously fed me with tales of kitchen thrift: from a grandmother who’d refrigerate a couple of leftover spoonfuls of scrambled eggs in plastic wrap (the plastic was later washed, dried, and reused), mix them with mayo, and put it all on a roll for lunch; to moms and grandmas who used pickle juice in their marinades and salad dressings, and baked “pie crust cookies,” a genius way of thriftily turning excess pie dough into an extra treat.

The Sweet Taste of Thrift

Having too much seasonal fruit on hand has inspired many a shrewd and frugal kitchen practice, from canning and jam making to pie baking. Living in California’s North Central Valley in the 1970s, Kate Washington’s mother was into natural foods, and made homemade fruit leather with excess orchard fruit: apricots, peaches, and pears.

“She didn’t sweeten it or, as I recall, add lemon juice, so it went pretty brown and got tough,” Washington said. “My friend Susie and I called it ‘alligator skin’ and tried to convince our classmates that it was really alligator skin. Let me tell you, it was impossible to trade that for a Hostess cupcake at elementary school. I thought it was super weird and embarrassing. I don’t think that anymore!”

Enterprising home bakers also knew that “pie cookies” could stretch a delicious fruit pie even further. “My grandma always saved the scraps from pie crusts and made cinnamon pies for us children,” said Grace Alexander, who grew up in Texas. “She’d roll a scrap out in a circle, dot soft butter on it, sprinkle half with sugar and cinnamon, fold it over, crimp the edges with a fork, and prick our name on the top before baking.”

Other moms made unfolded versions of the pie cookie: cut into rounds or squares, or irregular shapes and sizes like the ones Washington fondly remembers, before they were sprinkled with cinnamon sugar and baked.

Since her childhood, Washington has moved from Chico to Sacramento. When her mother died nine years ago, her best friend gave her a peach tree, which she planted in her yard: a lovely remembrance, as peaches were her mother’s favorite fruit.

“In summer, I make a big batch of her granola with almonds from my dad’s orchard and eat it with yogurt and the peaches from ‘her’ tree. It feels very much like home and like part of my heritage, kind of bringing all the parts of my family background together,” Washington said.

Far from Washington’s Central California childhood was that of first-generation American Vivian Jao, the daughter of ethnically Chinese parents who met in Taiwan before immigrating to the United States. Her mother was born and raised in Vietnam and her father in Indonesia. Jao was born in New York, and moved to New Jersey when she was about six.

“My mom would blanch greens like spinach, season the blanching water with salt, and serve it as a broth before the rest of the meal,” said Jao. “She felt that a lot of vegetables’ vitamins leached out into the water and she didn’t want to waste it. Plus, the ‘broth’ filled us up.”

Leftovers were smartly utilized: Rice was often used to make congee for brunch on the weekends, or added to fried rice, along with extra french fries and hot dogs. “To make an avocado stretch for dessert, we’d puree it into a shake or smoothie with ice cubes, milk, and condensed milk to sweeten it. It’s a popular drink in both Vietnam and Indonesia, although in Indonesia, they usually add coffee and chocolate syrup as well.”

Like Jao’s mother’s spinach broth and my aunt’s broccoli water, these food ways were not just for frugality; they were often affordable tactics in the quest for good health. While Jao’s mother always baked cake from a boxed mix, she would substitute milk for the water because she thought it was healthier. “And because the cake had eggs and milk, she would make it for us for breakfast. She rarely had sweets or junk food, so this was a nice treat,” Jao said.

When Eileen Cho was 4, her family moved from South Korea to the United States. “My grandmother, who is super Korean, was a health nut and I thought all the food she made and ate was disgusting,” Cho said. Every morning, she’d make a black bean smoothie: boiled, still-warm black beans mixed in a blender with a dash of salt, half a cup of soy milk, and no added sweetness. While black beans are a feature in Korean cuisine, they aren’t usually in smoothie form. Cho would always decline the drink when offered.

Years later as a college student, Cho’s diet was suffering. She was tired of either cooking all the time or eating out, and knew she wasn’t getting enough protein. These were motivating factors behind the resurrection of the protein-rich black bean smoothie, which she began to make for herself.

“Nostalgia played a big part, but I also like that unlike fruits, the black bean has a soft flavor, and I find it very comforting and soothing for the stomach,” Cho said. She sweetens the warm drink with a dash of honey.

What DIY Brought to the Table

When thrift, nostalgia, and DIY spirit join forces, anything is possible in the kitchen. Kim Ranjbar’s father, who moved to the United States from Tehran when he was 18, used to make his own raisins with the bruised, broken, and browning remains of store-bought grapes. He would lay them on serving trays atop paper towels, and place them in the sun.

“It would usually take several days and it drove my mom crazy,” said Ranjbar. “I don’t know why my dad did this. I want to say [it was] because he was frugal and hated seeing the ‘unwanted’ grapes go in the trash.” Ranjbar doesn’t think the family dried grapes when her father still lived in Iran, but knows that this was a process they often used to dry cooking herbs like thyme, dill, and green onion. “I didn’t think it was odd when I was a child, but my friends did,” she said.

When Atlanta-based Nandita Godbole was growing up in Mumbai, her mother used to have her flour milled from wheat berries at a local mill. It was simply not available pre-milled in the store. When Godbole’s mother had the ability to purchase a mill, and the space—a hallway of their third-story apartment—she bought one that was the size of a washing machine.

“It was very, very loud, and I used to hate it!” said Godbole. “My mom would have to make amends with grudging neighbors who did not care for the noise by inviting them to tea or sending over a plate of treats. When she milled flour, [it was] everywhere in the house.”

Flash forward 30 some years, and Godbole has her own modern countertop flour mill, for making stone-ground whole wheat flour for roti. The mill, which she says allows for total control over quality and produces a more nutrient-dense, aromatic, and sweeter flour than what one finds in a conventional grocery store, was an integral research tool for her book “Roti: 40 Classic Breads & Sides,” which was released earlier this month.

“The process of first milling and then making rotis from scratch can be relaxing and meditative,” Godbole said. “It is not merely about the flour, but more about the process.”

“At my mom’s place, each practice—be it grinding the spices or making the flour—was an elaborate activity with many steps,” she continued. “Over the decades, it became a bonding activity for everyone involved.” This included household staff, who have since retired or moved on. “If it were not for memories of making spices with them, these people who helped my mother would be long forgotten. But we still remember them—that is a meaningful connection for me.”

Juicing Up the Gravy

Back to that broccoli water my aunt used to save—as it turns out, it does have a more palatable second life in the kitchen. “I remember asking my mum as a teenager why my grandma made the best gravy,” said Canadian writer Johanna Read. “She told me that vegetable juice is the secret to good gravy.”

Whenever her mom or grandmother roasted a turkey, chicken, or beef, instead of whisking plain water into the pan to make homemade gravy, they used the water from the vegetables they’d cooked with the meal, which was usually broccoli, green beans, or carrots. “The veg juice gives the gravy a deeper flavor, with the added bonus of extra vitamins,” said Read.

“It does make me feel somewhat connected to my past, remembering meals at my grandma’s with multitudes of my cousins,” she said. “But mostly it makes me think I’d better learn how to make this gravy myself, before my mum gets tired of making it for me!”

My mom never made this kind of traditional gravy; it just wasn’t part of her culinary repertoire. But if she had, I can assure you there would have been containers of it in the basement freezer, wedged in between several challahs, last year’s Passover chicken soup “starter,” and half a dozen bundt cakes, because “you never know.”

Correction: A previous version of this article misspelled the name of Kim Ranjbar. The Epoch Times regrets the error.