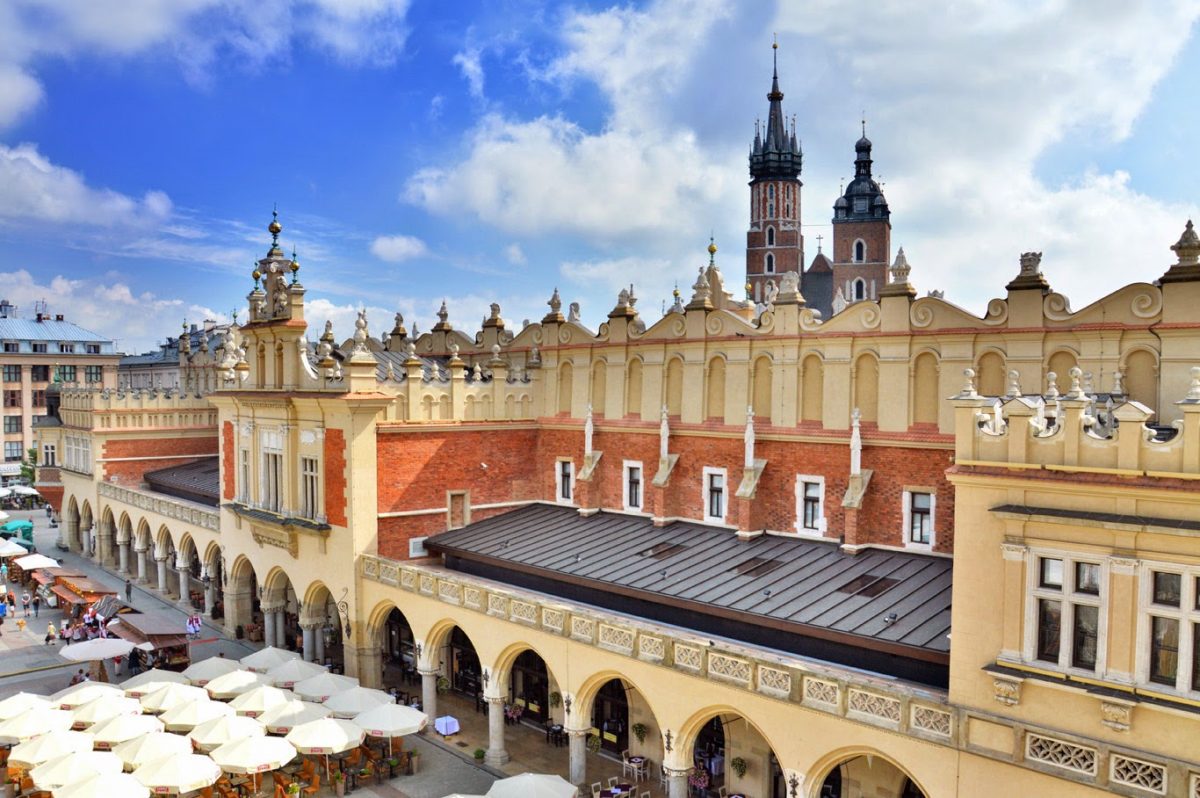 What To See in Cracow, Poland – The City with Medieval Charm

Cracow (Kraków in Polish), due to its location, went through enormously difficult times in both ancient and recent history. Squeezed between the Europe’s most powerful empires, it suffered invasions, raids and pillages from all directions. Miraculously, unlike Warsaw – the Polish capital, it survived the atrocities of the second world war almost intact, therefore, you can still sense its medieval charm strolling down the colorful cozy streets or having lunch in the largest medieval market square in Europe.

How to Get to Cracow

Many European airlines offer cheap flights to Cracow’s Airport – Balice. It’s also very easily accessible from other cities in Poland by bus or train. However, the trains in Poland may be often delayed and quite slow. After arrival in Balice, you can get a special tram that runs between the city center and the airport every 30 minutes – for around 20 PLN (5 EUR/6.40 USD). The return ticket is a bit cheaper. The journey takes only about 20 minutes. Another option, much cheaper (although longer – around 1 hour) is to take a public bus – it will cost less than 4 PLN (0.90 EUR/1.30 USD).

The good thing about Cracow is that you are always close to the city center, both from bus or train station is just a short walk to the main square.

What to See in Krakow

The main Market Square (Rynek Główny), situated within the old town walls, is the largest among all market squares in medieval towns in Europe. It dates back to the 13th century and occupies the space of almost 40.000 square meters (430.000 ft). Many of the most important Cracow’s monuments are located somewhere within the square. It’s architecture is truly impressive, it will take you back in time to medieval Europe. It was an important center in Polish history where many significant events took place. After the communism era, the buildings have been restored and now Cracow’s main square is one of the most beautiful in Europe.

There is one thing you must try in summer in Krakow – ice cream! They are completely home made, full of flavor, with wild berries (and I mean real wild berries) and are so cheap! To be honest, I tried the most expensive ice cream in the world in Florence and I must admit I still prefer the Cracow’s one!

Cracow’s Main Market Square and The Cloth Hall are the most important landmarks and the most photographed sites in the city, however you will come across multiple other little beautiful squares in a very near proximity to the main one.

Sukiennice, dating back to as early as the 13th century, was, initially in the form of wooden stalls in the center of the square, used for trade. During later centuries, it was modernized and rebuilt numerous of times, especially after the fires that destroyed the town completely. The Cloth Hall, the way we can see it today, dates back to 1879. After that date however, it was subjected to some minor changes and repairs. Today it serves mainly as a magnificent monument and it’s a place were you can purchase some of the highest quality regional hand craft products and souvenirs.

Another two important monuments within the market square, right beside the opposite corners of Sukiennice (Cloth Hall) are the Town Hall Tower and St. Adalbert’s Church. The original 12th century town hall doesn’t exist anymore as it was destroyed by the Austrians during the Austrian partition of Poland in the 19th century. The tower still stands until this day and provides beautiful views over the main square, Cloth Hall and St. Mary’s Church. You must pay a fee to enter the tower, however it’s really low.

St. Adalbert’s Church (Kościół Św. Wojciecha in Polish) is the little white building with a dome on top on the opposite side of the square. It’s foundations, found underground date back to the ninth century, making in the oldest church in Poland. The legend has it that St. Adalbert had preached there before he went on further north to Prussia to bring Christianity.

St. Mary’s Basilica (or St. Mary’s Church) is another point of interest right at the corner of the Market Square. This dark red, Gothic-style building was erected in the 13th century and later rebuilt a century later. What is interesting about St. Mary’s Church is that every hour, from the top tower, a broken trumpet melody is played. This is due to the events that took place in the 13th century, when a trumpeter tired to sound the alarm during a Mongol invasion. He was shot dead in the middle of the play, thus the tune suddenly breaks off. It is performed in the exact same way until today.

Inside the basilica, there is a masterpiece – the world’s largest Gothic altar created by German sculptor Veit Stoss. It was carved in the 15th century when Veit Stoss moved from Germany to Cracow. It’s 13 meters (42 ft.) high and each individual statue is almost 3 meters (10 ft.) tall.

The Underground Museum in Cracow is located right under the Cloth Hall. It was created as late as 2009 after the discovery of ancient city walls well below the level of today’s market square. The visit in the museum will take you a thousand years back in time, you will see the way the city was, the people’s lifestyle and daily duties in the middle ages. The museum boasts multimedia and laser presentations as well as the original ruins and artifacts.

St. Andrew’s Church, together with St. Adalbert’s Church is one of the oldest in Poland, built in 1058. It’s located in Grodzka street, a few minute walk from the main square. It is the only building in Cracow that survived the 13th century Mongol invasion. It is today in the same form as it was in the middle ages. It differs from other churches in Poland having its Romanesque style and white stone in contrast to the more common brick constructions. It was also used as a fortress. The interior is lavishly decorated with golden ornaments and statues. The entry is free of charge.

Barbican, near Basztowa Street, also a few minute walk from the old town, together with the city walls are constructions that comprised the defensive system of the city in the medieval era. Barbican is one of only three fortresses of this kind still standing in Europe. It is best preserved of all of them. It dates back to the 15th century and it used to be connected to the old town. Now, as a typical medieval building is a popular tourist attraction. Crossing the park where there used to be a moat will take you to the remaining city walls and the Floriańska (St. Florian’s) Gate leading to the Market Square.

Wawel Royal castle, on the river Vistula was once the seat of Polish Kings, when Cracow was still the country’s capital. Some of the oldest buildings on the site, now in ruins date back to the 10th century. The Wawel Castle is a profoundly important place in Polish ancient history. The Polish state was formed here in the 10th century, however the fortifications and settlements existed in Wawel much earlier. The beautiful cathedral was erected in 13th century and then additional structures were added over the following centuries.

The Renaissance period was the most fortunate in Polish history, and in the 15th century, during the reign of the Jagiellon dynasty, Wawel castle was restored and the beautiful Renaissance courtyard added with the help of artisans from Florence in Italy.

Entry fees vary, depending on which parts of the castle you wish to visit. There are also days when you can visit it free of charge.