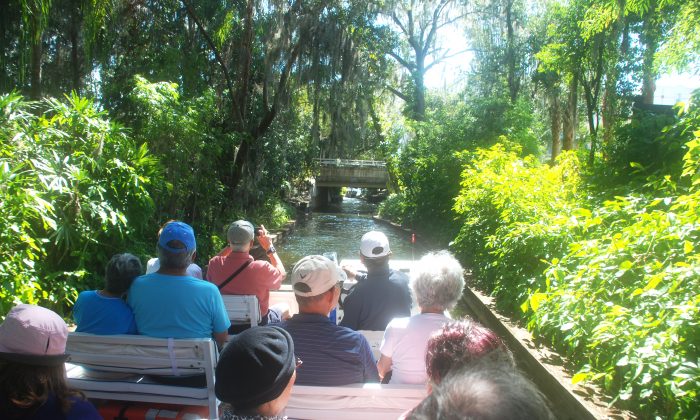 What to Do on a Short Stay in Orlando

If you have limited time in the Orlando, Fla., area perish the thought of being able to do theme parks. Lines for rides will take up most of your time and getting to them can be a traffic nightmare.

If you want to absorb something of the local scene away from the crush then head to Winter Park. It is a beautiful city, a haven for the super wealthy, with clear freshwater lakes and world-class museums and art collections. Some of them are free.

First on any agenda should be a pontoon boat trip around Winter Park’s lakes. The trip takes an hour and leads through magnificent tropical plantings under bridges and through man-made canals. Mansions dot the landscape.

Boat operators state that the average price for a home on the lake is $4 million. That’s a $4-million view!

Ospreys, cormorants, and—for the lucky ones—even golden eagles can be seen on the lake. Kayakers, canoe paddlers, and water skiers ply the lakes.

History is told of logging camps, Dinky Railway lines, and famous people that came to Winter Park in the early days. One famous resident was Albin Polasek.

This Czekoslovakian artist is considered one of the world’s greatest sculptors. His home on Lake Osceola has been preserved with many of his finest works on display. The Polasek gardens give down to the water. It is a perfect place to relax. Bring a snack or lunch, picnic on the grounds, and enjoy an informative tour.

“He suffered a stroke in 1950,” a docent explained. “Polasek lost the use of one arm. He had an assistant hold a chisel for him. This is entitled ‘Man Carving His Own Destiny.'” The docent pointed to a sculpture of a man emerging from stone.

Not to be missed further north on Park Avenue is the Charles Hosmer Morse Museum of American Art.

The Morse Museum has one of the finest collections of art from Louis Comfort Tiffany. Tiffany’s Glass and Decorating Company created a chapel for the World’s Columbian Exposition in 1893. The chapel is a masterpiece of mosaic glass.

After the Chicago World’s Fair it was removed to the Cathedral of St. John the Divine in New York City but it was eventually acquired by benefactors of the Morse Museum.

The Morse Museum has Tiffany glass, chandeliers, paintings, and mosaics as well as Tiffany designed jewelry. Art glass and sculptures are magnificent examples of American craftsmanship and art.

Hungry? After walking through the Polasek gardens and museum, admiring Tiffany’s works at the Morse, and taking an hour boat tour around the lakes, head down Welbourne Avenue off Park. Cocina 214 has real Mexican food—not only delicious, but also fairly priced.

Oscar Gaona, general manager of Cocina 214, came to Florida from Dallas, Texas. He missed home cooking, so he brought his own flavor to Cocina 214. “Cocina is ‘kitchen’ in Spanish, and 214 is the area code for Dallas,” a server named Giovanny told me. “Translated, it is really ‘Dallas Kitchen.”‘ His mother is from Honduras, his father German-Irish. It still didn’t explain his Italian name, even spelled with a “y.”

After dinner, take a stroll on the Rollins College campus. It is the oldest college in Florida, founded in 1885, and it was voted the most beautiful college campus in America by the Princeton Review.

The Rollins College Art Gallery is open to the public without charge and contains a magnificent collection.

There are plenty of places to stay in Winter Park although the fact that they cater to wealthy clientele means that driving another three miles north to Maitland will land you at the Sheraton Orlando North Hotel.

The swimming pool is set among banana fronds and palm trees. A hammock rocks gently, accompanied by a cascading waterfall over rocks surrounding the hot tub. If you select the club floor, you receive a complimentary hot breakfast of sausages and eggs, evening appetizers, and always a variety of hot and cold beverages.

Joseph McFadden has just come across from Ireland to cook at the hotel’s An Tobar Pub. He’ll serve Guinness bread hot from the oven, Guinness pancake topped with a fleurette of salmon, and shepherd’s pie made with lamb.

Since fresh seafood comes in every day from Tampa and Miami, McFadden, raised in County Donegal by the sea, will prepare a good lot of seared scallops as well.