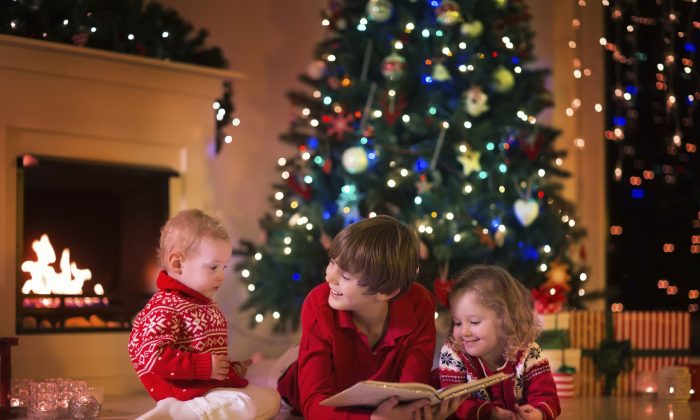 What plot lines do families use in times of adversity? (FamVeld)
Arts & Culture

What Stories Should You Be Telling Kids This Holiday Season?

Families most frequently tell stories around the time of vacations, family reunions, (sadly) funerals, Thanksgiving and, of course, the family-oriented winter holidays of Christmas, Hanukkah and Kwanzaa.

Stories are told about times past, times present and even times yet to be. These stories mix real people and places with imaginary people and places. For instance, there was never anyone called Sherlock Holmes, but the town he lived in – London – is real. The street he lived on – Baker Street – is also real. But there is no 221B – his house number in the story.

So, why do we tell these stories?

For more than two decades, my colleague, Robyn Fivush, and I have been studying the importance of family stories at Emory University’s Family Narratives Project, which conducts research on how people remember and narrate the events of their lives. And we have found that the more children know about their own family history, the healthier and more resilient they are.

There are a variety of forms that family stories take. It has been our experience that the so-called “bad stories” – in which bad things happen to good people – do more to immunize children and build resilience than happy ones.

What Stories Do Families Tell?

Most families have stories that parallel the Seven Basic Plots proposed by journalist Christopher Booker.

Generally, all of the family story plots contribute to a sense of history and resilience in families. But when dealing with difficult times, families tell the “voyage and return” and “overcoming the monster” stories.

Our interviews with professionals working on rehabilitation, patients and patients’ families show that the narrative plot – “voyage and return” – is arguably the form most commonly taken by family stories to talk about illnesses and recovery.

For instance, many families use “journey” metaphors when talking about illnesses. One family we interviewed, for example, saw the emergency room, the hospital, the rehabilitation center and the outpatient treatment center as “stations” (ports) along the way back home.

Another family talked about how long the “trip” had been from injury to recovery. This plot line works because it is so easily understood by people of all ages.

Such “voyage and return” stories provide hope in times of present and future illnesses. They teach that, with time and care, people who have “traveled” into a far-off land of infirmity can and do return.

Based on my four decades of experience as a licensed clinical psychologist and on the hundreds of interviews we did at the Family Narratives Project over an 10-year period, it’s my belief that knowing such stories helps people get through their own illnesses and those of their loved ones.

Voyage and return is just one of the seven basic plots that we have found in family stories. An illness or injury from which someone does not recover becomes a “Tragedy story.” Very often, comedic details are added to even the most trying of narratives.

Generally, it’s been our experience that stories are recounted on an “as needed” basis. And stories may have more than one type of plot. So, if a child is having trouble in math, a grandparent might tell the child about how the same thing happened to the child’s mom or dad and how he or she overcame the challenge.

While not entirely separate from the “voyage and return” story, another of the seven basic family story plots that our research shows is important for children to hear is “overcoming the monster”.

There could be other stories about relatives or friends who experienced horrific events, resulting in injuries or even deaths of loved ones – all of these could be considered stories about overcoming some sort of “monster.”

The power of such stories rests in their being told long after they have been resolved and the tellers and listeners are safe or have successfully coped with their challenges. These stories teach resilience.

They teach that ordinary people can rise to heroic levels if they are called upon to do so. They teach us that no matter how scary the “monster” or how intimidated we are, we can prevail.

What Stories Should We Tell?

Does this mean we should tell only positive stories?

Many parent groups that I have spoken with fear telling their children so-called “bad stories” in which bad things happen to good people.

However, it has been our experience that bad stories do more to immunize children and build resilience than happy ones. We have theorized that this is because hearing about overcoming bad things tells children that they are part of a family that “rises above” and faces problems squarely.

When similar challenges then face the children themselves, they have role models to turn to.

To be sure, both good and bad plots are necessary in the set of stories that children know about their families. It helps kids the kids to know that people they are related to are strong enough to have overcome “monsters” in the past.

This helps them realize that when they come upon their own “monsters,” they will be able to overcome them as well.

Marshall Duke, Professor of Psychology, Emory University. This article was originally published on The Conversation. Read the original article.