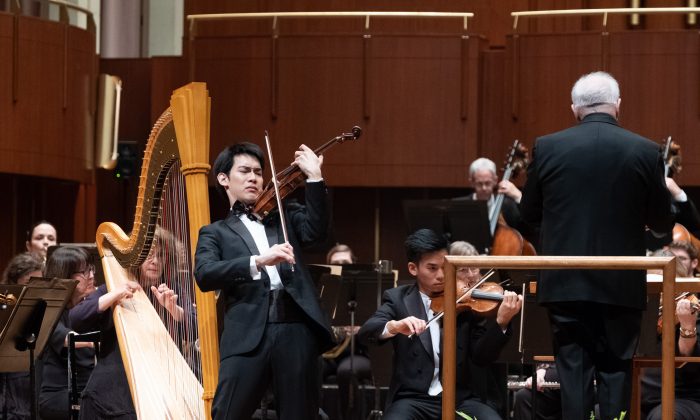 What Role Do Competitions Play in Classical Music?

It’s not his first win—Lin has already netted top prizes at Sendai, Wieniawski, Singapore, Shanghai, and other competitions. Former IVCI top prize winners include Leonidas Kavakos, Judith Ingolfsson, Augustin Hadelich, and many others.

What do these medals really mean for musicians? Prior to a competition, sometimes these musicians are completely unknown, though sometimes they are already rising stars on the competition circuit. But winning a prestigious competition—not all competitions are equal—can make a career.

IVCI is very cognizant of this. It builds the 17-day competition, its prize, and its rounds to find a concert-ready artist around launching the winner’s career.

The medalists receive a large cash prize (gold is $30,000), a Carnegie Hall recital, international concert engagements, four years of career mentorship and career management by IVCI, and the 1683 ex-Gingold Stradivarius on loan for the next four years.

“The four rounds of the Competition are structured to test the complete artistry of the violinists from Bach to the contemporary composer William Bolcom,” Jaime Laredo, IVCI Jury President, said by email.

IVCI also aims to focus on the less competitive aspects of a major competition, such as the concerts themselves and the artistry of music-making. The performances were livestreamed to global audiences and still available to watch online.

Lin picked one of his personal favorites for his final round concerto as soon as he saw the piece on the list—Max Bruch’s “Scottish Fantasy”—despite the fact that it’s not the technical showpiece a musician would usually try to wow the judges with in a competition. He’d never heard it played in competition or seen it on the list—and even this time around, Lin was the only one to choose that piece.

“Richard Lin clearly showed that he is a seasoned artist with something unique and personal to say with his playing,” Laredo said.

Lin, with dual citizenship in Taiwan and the United States,  previously had concert engagements mainly in Asia and Europe, but with the help of the IVCI management, he looks forward to playing more concerts in the U.S.

For Lin, the high caliber IVCI was the kind of event he’d dreamed about since he was a young violinist.

“I did not treat it as a competition, I performed as if they were my own concerts instead,” Lin said via email. “Thinking of winning may add more pressure on myself and hinder my music making.  I was extremely surprised, humbled, and honored to be awarded the first prize.”

Josef Gingold is remembered not just as a great performer but a beloved violin teacher. He studied under Eugène Ysaÿe and had an illustrious career before teaching at the Indiana University Jacobs School of Music for more than 30 years, where he mentored musicians including Gil Shaham, Joshua Bell, Jaime Laredo, and Arnold Steinhardt.

When Gingold founded IVCI in 1982, the competition was supposed to be a one-off. But it went so well, it was turned into a recurring competition taking place every four years.

Gingold had left his violin to his son, who after his father’s death, sold it through a third party to IVCI for $1.6 million. From 1998 onward, the instrument has been on loan to medalists to play.

The 2006 Indianapolis laureate Augustin Hadelich, who performed with the ex-Gingold, told Violinist.com that everywhere he went he met students of Gingold.

“In every orchestra, every place, there was a student of Josef Gingold who came up and wanted to see the violin,” Hadelich said. “Gingold was so loved by everybody, and the violin really does sound the way he did. It’s a really beautiful instrument, and I have to say, I learned a lot about playing on this violin.”

But instruments like these are rare. Everyone wants to play on a Stradivarius or Guarnerius, one of these legendary violins from Cremona, Italy, but it’s not easy getting your hands on one. Even their contemporaries, like a Bergonzi or a Guadagnini, once considered a “poor man’s Strad,” aren’t anything a musician could afford.

Today, fewer than 200 Guarnerius and 700 Stradivarius instruments survive. Demand has driven prices up into the multi-millions, well out of the price range of most musicians. A few of these instruments sit in museums and private collections, but a handful of them are owned by foundations and orchestras and organizations like ICVI, which then loan or gift them to talented musicians to foster their growth and help them make the next step in their careers.

A good violin isn’t just a famous name to add to a violinist’s fame. The strength of sound and the tonal nuance of a solid violin is an absolute requirement for violinists who need to fill a concert hall with beautiful sound.

About 25 years ago, no one wanted to buy a contemporary instrument.

Contemporary luthiers were few and mostly making copies of famous instruments. But with rising interest in this instrument-making craft and the internet’s ability to share a flood of information globally, more and more makers turned out better sounding instruments.

“Modern violin making has made extraordinary strides in the last 15 years, so much so that the contemporary instruments have been proven to rival the old Cremonese masters such as Stradivari and Guarneri in terms of tonal production,” Glen Kwok, executive director of ICVI, said by email.

So the competition put out a search for contemporary violins. Makers were encouraged to submit instruments made from 2001 onward for consideration by a panel of professional violinists under controlled, blind-playing conditions. Forty-five violins were submitted, and the initial panel plus a third-party craftsman whittled the options down to 12.

Competition and jury members, plus additional professional violinists, were invited to join the search and rank their top choices.

Ultimately, a violin by Paul Crowley from Brooklyn and Philip Ihle from London each were purchased by the competition.

Lin, who has performed on a 1840 Joannes Franciscus Pressenda violin on loan from the Rin Collection in Singapore, has tried all three instruments but hasn’t yet made a pick.

“The ex-Gingold Strad has a unique refined tone which I love. There are also two modern violins that are among the choices, and they surprised me with huge projection, a thick and dark tone, which I have never experienced on any modern violin,” Lin said. “So it is a dilemma for me to choose between the three of them.”