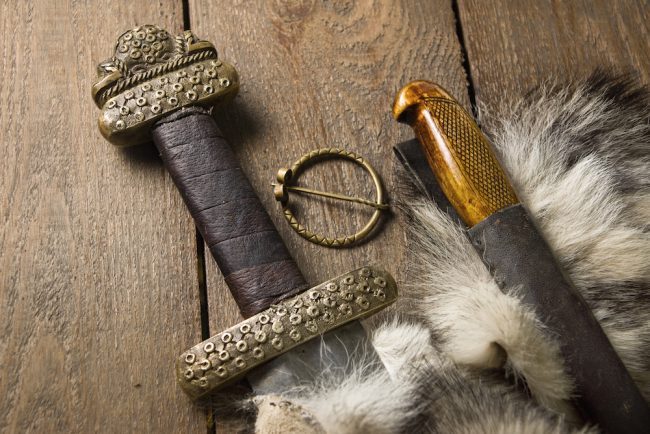 English historiography has tended to romanticize the Vikings.(Shutterstock)
Arts & Culture

What Medieval Sources Reveal About the True Nature of the Vikings

BY The Conversation TIMEApril 17, 2019 PRINT

We’ve seen it all in documentaries and dramas. The Viking Age begins as hordes of Vikings leap ashore from their longships, in a lightning raid against defenseless clerics and lay folk, only to depart as swiftly as they arrive, loaded up with slaves and booty. These hit-and-run raids are seen to have continued for decades before visitors from Scandinavia began to trade, negotiate, and found settlements on English soil. While it can’t be denied that Viking raids were violent, the established narrative of first contact seems oversimplified in the light of contemporary evidence.

The founding narrative for popular portrayals is the “Anglo-Saxon Chronicle,” which survives in different versions. The core text, or “common stock,” was first composed in Wessex around A.D. 892 and reflects the interests of King Alfred the Great, whose career was dedicated to battling Vikings. It retrospectively reports the first atrocity by Northmen who arrived in three ships in Dorset one day between A.D. 786 and A.D. 802, and who slew a royal administrator of the kingdom of Wessex.

“The Northern Recension” of the “Anglo-Saxon Chronicle” records heavenly portents before “heathens” descended on the monastery of Lindisfarne in A.D. 793. Alcuin, a contemporary, wrote a letter decrying the blood of priests being spilled across the altar of that famous Northumbrian church.

“The Northern Recension” also records an attack the following year on a monastery at the mouth of the River Don. No further Viking activity is reported in the “Anglo-Saxon Chronicle” until A.D. 835 when a series of raids began along the southern coasts of England. It is not until A.D. 851 that the chronicle records the foundation of a Viking base in England on the Isle of Sheppey.

In the chronicle, the first Vikings are shrouded in mystery, presented as agents of supernatural punishment more than flesh-and-blood human beings. Neglected evidence from non-chronicle sources casts more light on these events. The famous scholar Alcuin wrote many letters, but only one of these related to the start of the Viking Age (his response to the King of Northumbria about the sack of Lindisfarne mentioned above) tends to be quoted.

In a letter to the Bishop of Lindisfarne, Alcuin says that he will seek help from the Emperor Charlemagne to recover the youths who had been seized in the attack. This suggests that the Viking group responsible could be identified and that diplomatic channels might have existed to secure the release of captives.

A few years later, in A.D. 797, Alcuin writes to the clergy and nobles of Kent, urging them to be good Christians because “a pagan people is becoming accustomed to laying waste our shores with piratical robbery.”  This dire view of events would have little currency if it did not reflect the experience of the Kentish elite. This suggests that more early Viking activity took place than the “Anglo-Saxon Chronicle” reports.

Perhaps the greatest challenge to the chronicle comes in the form of a series of charters, administrative documents, which have survived from Kent relating to events from A.D. 792 to A.D. 822. It seems miraculous that so many of these fragile documents have survived intact for over 1,000 years to be consulted by today’s scholars. The texts of some have only survived through later medieval copies, and more must have been lost.

The charters that have survived from Kent refer to grants of land and privileges but place an obligation on the recipient to raise armies, build bridges, and construct fortifications “against pagans.” This suggests that Vikings were more active and better defended against than many historians have realized.

Intriguingly, charters from A.D. 811 and A.D. 822 also refer to an obligation to destroy fortresses, so Vikings may have been occupying defensive sites in Kent in this period. One charter of A.D. 822 specifies military obligations against “pagan enemies,” which suggests that not all pagans were enemies, and some nonhostile contact may have developed.

The evidence is complemented by continental accounts relating to the capture of an English papal envoy, Aldwulf. He was carried off while attempting to cross the English Channel, but was ransomed in A.D. 809 by an Englishman and eventually made his way back to Rome. Assuming that the pirates were Vikings (the term “pirata” was synonymous with Vikings in Frankish sources of the time), it indicates they had a base in Britain and could engage in high-level negotiations.

English historiography has tended to romanticize the Vikings, either as demonic heathen barbarians or as brave empire-building ancestors. Both narratives have fixated on the violent clash between cultures and fed into dramatic accounts replete with heroes and villains.

But reconsidered evidence shows that Vikings were not bolts from the blue; their activities were planned by their military leaders, and they were capable at an early stage of striking deals with communities and local leaders. The picture of early Viking contact is more complex, calculated, and pragmatic than our traditional narratives have allowed.

Clare Downham is a senior lecturer in Irish studies at the University of Liverpool in the UK. This article was originally published on The Conversation.