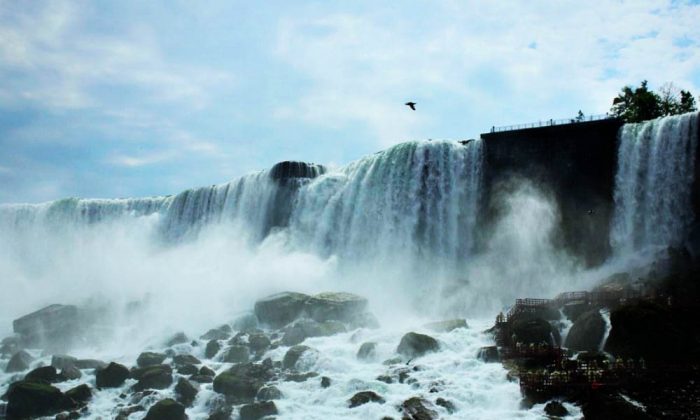 AT THE VERY edge of Niagara Falls water seems to throw itself over with an abandon of mythical proportions. The sheer force is mesmerizing: a mighty, terrifying spectacle of millions of litres of water dropping 30 stories, landing with a thunderous roar and sending up a churning tumult of foam and mist.

All along the promenade, tourists from every part of the world gazes in hypnotic wonder, getting soaked by the mist when the wind changes, and clicking photos like there’s no tomorrow. An old stone parapet, the only barrier between the tourists and a misstep of doom, lines the walkway.

Watching this scene, it occurs to me that the tourists are, in fact, awestruck. Like so many things about Niagara Falls, the cliche just seems to fit.

But is the desire to feel awestruck enough to make Niagara Falls one of the top tourist attractions in the world today? Or, is there something more?

Each year, about 12 million people make the journey to a small town in southern Ontario, a couple of hours drive from Toronto, to visit Niagara Falls. There are 500 waterfalls in the world higher; there are many that are far more picturesque. But there are none that are more powerful. In terms of width and volume of water, Niagara Falls is number one.

When I travel in India, and tell people I’m Canadian, invariably they say they would love to see Niagara Falls. Like the Taj Mahal, it has a global reputation as a world wonder and many long to behold the spectacle.

So I went, one sunny day in May, to explore the Niagara Falls phenomenon and find out if there’s an underlying reason for the enduring appeal.

The Falls seem to do that to people. And they’ve been doing it for a long time. Niagara Falls may in fact be one of the world’s first tourist attractions. I don’t know about the habits of the Aboriginal people who are native to southern Ontario, but early European settlers have been going on excursions to picnic on the banks of the Niagara River where the mighty falls drop 52 metres since the mid-1600s. The first sketch by a European appeared in a book published in 1697.

During the 18th century, tourism became popular, and by mid-century, it was the area’s main industry. By the 1900s, going to Niagara Falls was considered the trip of a lifetime. The 20th century saw the era of daredevils — did you know the first person to go over in a barrel was a woman? – and the rise of the honeymoon capital of the world.

Growing up in nearby Burlington, I too went on many excursions to Niagara Falls. Though in my case, “because it’s there” might well have been the motive.