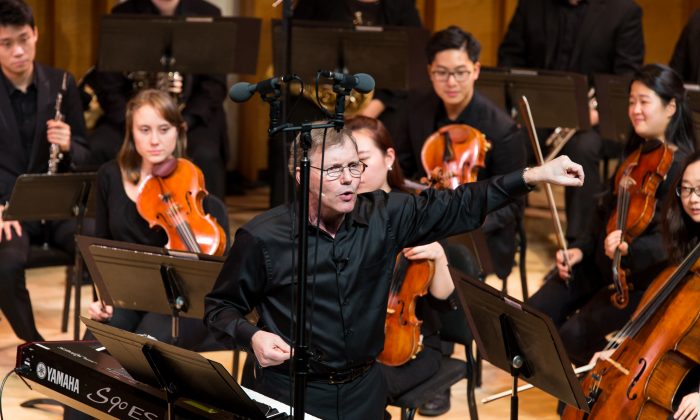 NEW YORK—Beethoven, according to musicologist Rob Kapilow, is not about being so much as it is about becoming.

We often think of the composer as revolutionary and barrier-breaking—utterly original—but in fact, there was a very natural progression to his work, his ideas were simple, and his originality was quite rooted in tradition, Kapilow says.

On a recent Monday night, Kapilow sought to explain these innovations in the simplest terms. He took apart Beethoven’s First Symphony for a highly entertained crowd—and orchestra—at the Merkin Concert Hall. On stage, the Manhattan School of Music Chamber Symphonia played examples for with the presentation, before performing the symphony in full.

The What Makes It Great? series by Kapilow is about listening to and noticing things that would otherwise pass us by. For about 20 years, the composer-author-pianist and NPR and PBS music commentator has done presentations on a broad range of musical works across the country, with the goal of having people able to interact with the music.

“My goal tonight is to make sure your ears are the equal to anyone in Beethoven’s audience,” Kapilow said.

After all, “Beethoven’s revolution could not have taken place without a vastly knowledgeable, widely experienced audience,” he said. “They understood how the language worked and they expected certain events to happen.” Although in music there are no rules, there are conventions that come with form, just as in any genre or medium.

Kapilow may not have been able to impress upon the audience the whole of the foundation Haydn and Mozart laid before Beethoven with their symphonic works, but he made sure the audience “didn’t miss a single plot twist.” The orchestra didn’t either, and their sense of fun and discovery during the performance transferred to the audience.

From the minuet at breakneck-speed to the Haydn-esque jokes, Kapilow made sure the audience understood what the conventions were, and how the composer made them completely original.

Turn of the Century

Beethoven’s First Symphony premiered in 1800 and served as a bridge of 18th century Classical music to the 19th century beginnings of Romantic music.

This was five years after Haydn’s last symphony, and Kapilow hypothesizes that Beethoven waited until later in his career to tackle the form so as to not compete directly with Haydn and Mozart right off the bat. He first carved out a niche for himself in other forms, like piano trios. “It wasn’t until he felt he had written enough that he could take on the Classical musical heritage,” Kapilow said.

There are a slew of things in the 20-some minute piece that Kapilow points out in relation to Haydn. The piece starts with an ending—two chords signalling a finale, a classic Haydn joke—but the orchestration of it is completely Beethoven.

Normally, Kapilow explained, these two notes would be played bowed by the strings, and sustained by the winds and horns. But Beethoven has the orchestra attack the first note loudly before decreasing to a very soft volume, with the strings just plucking that first note.

Until Beethoven, woodwinds were not so prominently featured in symphonies. But he does this throughout the piece (and, much to his critics’ dismay, throughout his entire career, Kapilow added).

The joke doesn’t just stop there—four notes in, we expect to be brought to the home key; it sounds like there should be a resolution. Beethoven doesn’t do that. He continues to search for that idea, giving us an unexpected note, and then another one, and then he ramps the dynamic all the way up.

Unlike Mozart’s jewel-like melodies, Beethoven’s ideas are ordinary and everyday, Kapilow pointed out in the First Symphony. He played the audience a short few notes, convinced them of how boring it was, and then showed all the different ways Beethoven explored this short musical idea across all the instrument sections in the next few seconds of the symphony.

“What’s important is not what an idea sounds like when you first meet it … but what it can become in the course of a movement,” Kapilow said.

Take, for example, the Beethoven convention of beginning with a soft, quiet melody, and then coming back to it with a full orchestra fortissimo. “It wasn’t just the simple effect of screaming something you would initially whisper that interested him. Anyone could do that,” Kapilow said. “It was the total transformation of the idea that interested him—seeing the hidden ideas in a theme or a person that we could have never imagined on first view.”

Beethoven also does this with other Haydn conventions, like slowly unfolding a scale one note at a time in the opening of the final movement.

In the finale opening, there is a “brutal contrast between the enormous fortissimo opening—full orchestra unison—which seems to promise some sort of of monumental Mahlerian symphony of some kind—and then this ludicrous little pocket-sized three-note little scale,” he said. It’s a “Haydn-like game that is pure Beethoven” as the opening scale tries to kickstart time and again until it’s transformed from this “ludicrous, tiny little germ” of a scale into a “fortissimo full orchestra dynamo”—becoming, not being.

The premise of Kapilow’s lecture was that these are only surprises and jokes if the audience understands the context, and he delivered on his promise of context, though much of the laughter was probably all for Kapilow.

He also emphasized that Beethoven’s revolution was gradual, “step by step, from within a tradition.” It was not an intentional subversion of form, but an artist’s journey of finding himself through first mastering what came before him.

“Beethoven found his voice by going over and over again what was already there, the forms and genres of his predecessors,” Kapilow said. “Beethoven created a new world by deeply immersing himself in the one that was already there.” It’s a lesson he feels is important today, where we live in a world so focused on originality and reinventing the wheel with each work of art.

“Perhaps we have something to learn from Beethoven. Perhaps the new is already there,” Kapilow said. “Perhaps all we need to do is listen.”

For Beethoven, the music hall was understandably full. But Shostakovich, Kapilow said to a not-yet-convinced audience at the beginning of the presentation, is really just as accessible. He is deconstructing Shostakovich’s String Quartet No. 8 on Dec. 12, Dvorak’s Piano Quintet No. 2 in February, and Duke Ellington’s music in April at the Merkin Concert Hall.