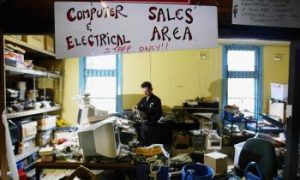 ‘What is happening today is also part of China’s history’

Ms. Schloendorff, the wife of Volker Schloendorff, an Oscar award recipient, came all the way from Berlin, a six-hour trip, to Ludwigsburg.

She said that she had no regrets in having to travel so far to see the Shen Yun show. "I don't regret it. The show is very, very beautiful and great. I can say this wholeheartedly."

Remarking on the colorful costumes and the ethnic diversity the show represented, she said, "The show was fantastic and fascinating, given the costumes, the different nationalities and the ethnic differences. Shen Yun is so diverse, something of everything and that what makes this show special."

The audience was very impressed, including Ms. Schloendorff, by the digital backdrop because it showed different pictures throughout the show.

The backdrops "interaction with the scenes was done extremely well. Especially the scene about the monkey king [The Monkey King Outwits Pigsy], when the moon suddenly came to the forefront was very effective. And then, when the fairies step out of the moon on stage—what an effect! I have never seen anything like that. It was amazing how the dance on stage continues on the backdrop and then comes back on stage."

The artists demeanor were amazing, she said: "One feels that the artists perform with passion and with all their heart. That comes through very well. One can feel at times that they have fun when dancing, especially in the scene with the inebriated monk, who turns into a hero."

"Amazing—the sincerity and discipline combined with happiness, fun and humor. The seriousness in one scene and the effortlessness in another heightens the suspense. The change from airy to severe is great."

The scenes about the persecution of Falun Gong in China "were very well integrated with the rest of the show. It shows the past and the present through Falun Gong scenes. It brings the show together."

"It was of great importance to show the persecution. After all, what is happening today is also part of China's history."

The choreography was excellent, "The integration of dance and song is highly appropriate. It helped me to understand the interplay and intensity the show represented. This perfect coordination couldn't have been achieved without a live orchestra."

Reporting by Alexander Hamrle and Heide B. Malhotra.