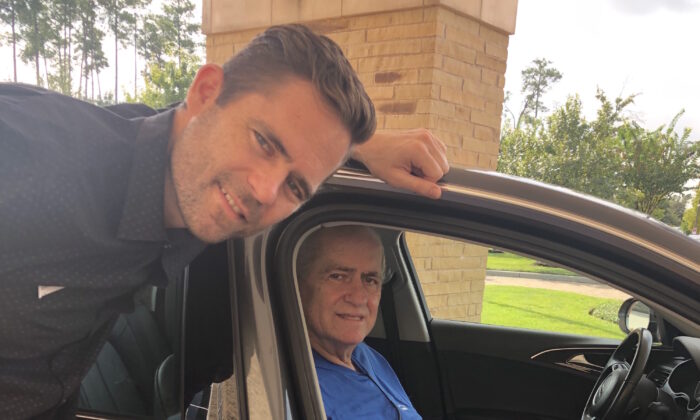 The author, Dustin Bass, with his father. (Courtesy of Dustin Bass)
Family & Home

What I Discovered From My Father’s Recovery From COVID

In early September, I wrote an article entitled “Faith and Love in the Time of COVID” about my father’s bout with COVID pneumonia. When I wrote that article, my father was being moved from the ICU to a non-ICU room.

In all, he was in the hospital for two months and had been at death’s door for a good portion of that period. On Sept. 30, I picked him up from the rehabilitation center to bring him home.

When I have posted about my father making it through this near-death experience, I have used the hashtag #miracleman. I can assure you it isn’t hyperbole. When he walked into the hospital, his oxygen level was at 81 percent, which is dangerously low. Weeks into his stay, he contracted a secondary infection that quickly filled up his lungs. The doctors had no idea what the infection was and were merely using guesswork to treat it. He couldn’t be off his oxygen without the risk of suffocation.

There were other concerns about his health. He had been bedridden for so long, clotting was a real threat (despite the blood thinners). There was concern about the stress of the situation and his high blood pressure. Then, there was the concern about his mental health: being trapped in a room with no visitors, hardly any sleep, and hallucinations from delirium. If there ever was a time to worry, those couple of months were full of those times. The worry led to faith, faith led to prayer, and prayer led to peace of mind; that was a consistent cycle, not just a one-time instance.

As my father began to improve, I got to witness a number of things—some that brought me hope, and others brought me despair.

What brought me hope was the massive outpouring of support I received from friends, and, of course, family. I co-host a history podcast, and fans who had never messaged or reached out before flooded me with well wishes and prayers. There were nurses who treated my father with dignity and kindness. My mother, brother, and I proved the importance of family engagement with the hospital staff, even at the level of annoyance (but that cannot matter in cases like this). I watched my mother, through weariness, display the utmost love and concern for my father.

More than anything, I noticed how my father never lost his sense of humor, his dignity, or his hope. But it wasn’t so much hope that he would survive, but that his hope was in the Lord, that no matter the outcome, it would be alright.

That’s empowering for one who will eventually have to face death.

There were moments, however, from our experience dealing with the medical community that brought despair. We witnessed how the hospital turned itself into a prison. There were no visitors allowed; it took a Texas law to be passed in order for one visitor a day to visit with a patient. In my father’s weakness, nurses would often leave the tray of food for my father as if expecting him to feed himself.

While in the non-ICU room trying to recover, I remember how red his eyelids were from the lack of sleep, and how nurses and workers in the hospital cared very little for how much noise they made. If two factors for improving someone’s health are human contact and sleep, then one would think both of those factors would be prioritized.

In the year 2021, with the medical community constantly praising itself for advances in medicine and medical technology, it was surprising to see how little they did for my father except provide oxygen, vitamins, and the guesswork of antibiotics. There is no doubt that had my father not told them that a ventilator was out of the question, the doctors would have treated him like everyone else on the floor and sealed his fate with a ventilator. It truly is unconscionable what hospital systems have turned into, but it appears that as long as they are paid an inordinate amount of money by the insurance companies or the government, then nothing much else matters to them; the bill has proven that.

It isn’t that despair outweighs hope simply because I was able to write more about the former. Truly, hope did outweigh despair because there were far more instances of hope than despair, and that stemmed from people―not systems.

That’s the great takeaway from it all. Our humanity in all this prevailed. Perhaps not from the perspective of the hospital staff and system, but from the many who showed their love and support. I think we all need to understand how very important that is to everyone. There isn’t a person out there―well, there might be a few―who would prefer loneliness and neglect over interaction and care. We need each other. We need contact. Sadly, I believe the medical community has lost sight of that with this pandemic and it is destroying that great institution.

Well before I nearly lost my father, I had learned to always get a good hug from him and tell him that I love him. Life has shown our family how fleeting time with each other is, and these past few months merely reiterated that point, in no uncertain terms.

Heaven knows we aren’t promised tomorrow, so we better get our words and hugs in while we can.