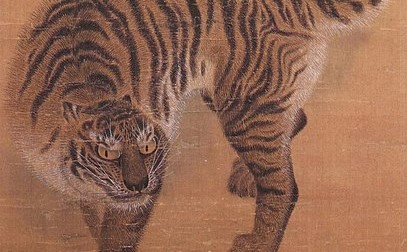 A detail from an 18th-century painting by the Korean artist Gim Hongdo. (Public Domain)
Books

What Good Is Poetry? The Dark Glory of Blake’s ‘The Tyger’

It is peculiar that the many tangled snarls that make up complex human experiences are composed of two basic elements: good and evil. These companions are all that we have to discern between, as we journey toward an end that concludes either well or badly. This single conclusion comes after a lifetime of that duality. And whether that single, final vision will show us a friend or foe, whether God or devil, is the subject of many a fear, many a prayer, and many a poem.

The English Romantic poet William Blake (1757–1827) struggled to the last fiber of his faculties with the clashing divisions between good and evil. He struck out with mad, melancholy verses; weird, washed-out paintings; and a mind that fed on a private mythology.

Blake wielded art, philosophy, and theology in order to reconcile heaven and hell. Through his imagination, with song and symbol, he sought to span the expanse between light and shadow, between innocence and experience, between good and evil. Usually, the poet would drive these disparate elements into some semblance of wholeness and ultimately unite them in perfection and peace.

In “The Tyger,” however, he doesn’t unite them. The poem is an excellent instance of Blake’s attributing authorship and accountability for natural things in the world to supernatural beings, whether good or evil. And he does more than hold them accountable; in his boldness, he questions or challenges them.

In the fiery forge of “The Tyger,” he depicts a presence of breathtaking destruction and wondrous ferocity.

Tyger Tyger, burning bright,
In the forests of the night;
What immortal hand or eye,
Could frame thy fearful symmetry?

In what distant deeps or skies.
Burnt the fire of thine eyes?
On what wings dare he aspire?
What the hand, dare seize the fire?

And what shoulder, & what art,
Could twist the sinews of thy heart?
And when thy heart began to beat,
What dread hand? & what dread feet?

What the hammer? what the chain,
In what furnace was thy brain?
What the anvil? what dread grasp,
Dare its deadly terrors clasp!

When the stars threw down their spears
And water’d heaven with their tears:
Did he smile his work to see?
Did he who made the Lamb make thee?

Tyger Tyger burning bright,
In the forests of the night:
What immortal hand or eye,
Dare frame thy fearful symmetry?

While there may be mystical implications about this beast that belong to Blake alone, it is impossible to miss the allusion to the Tyger’s being a demon, or even the Devil, in all its ancient, primal, heart-pounding terror. Whatever the Tyger is, it is not a striped jungle cat—it is not a “tiger.” But instead, it burns with a very different fire, and Blake’s awe over this unbridled rebel is palpable.

The poem bears a thinly veiled accusation in its drumbeat stanzas. After looking at the horrifying and infernal shape, Blake turns to its maker with incredulity and even indictment for creating such an object of horror. It is hammered and honed in dark, spark-spitting furnaces till it dared, with Promethean nerve, to seize the untouchable fires from which it emerged. Did not Lucifer try to seize the untouchable hand that forged him?

But with this flaming fiend rising on proud wings comes a descent, a cascade like a shower of stars and spears and tears. The war of paradise was waged, and those who would not serve the Creator were cast into the abyss, creating not only a creature of devastating power but also the division that has framed and fractured the fabric of reality.

Blake all but accuses the Creator of creating the Accuser, Satan, asking with wild disbelief and perhaps a touch of wonder if the immortal one who made the lamb—a reference to Satan’s companion piece or counterpart, “The Lamb”—could have also constructed such a perverse paradox of fearful symmetry.

But consider this: What is more daring, to make such a monster or demand explanation from the maker?

“The Tyger” is a poem that wrestles with the problem of evil and writhes with the even greater problem of squaring evil and dreadfulness to a worldview that can include goodness and beauty. The symmetry of the Tyger is imbalanced, as it is a malevolent presence that comes from a benevolent Maker. This paradox cries out for a resolution through the din of ringing anvils and the hiss of heat.

Every person finds their own way of dealing with the conflicts of good and evil. William Blake’s way was through poetry, and there never was a finer way of driving at the heart of the terrible secrets of the universe. Though tigers lurk and lie in wait, the power of poetry is protective and purging, bringing glory even to the deepest darkness.